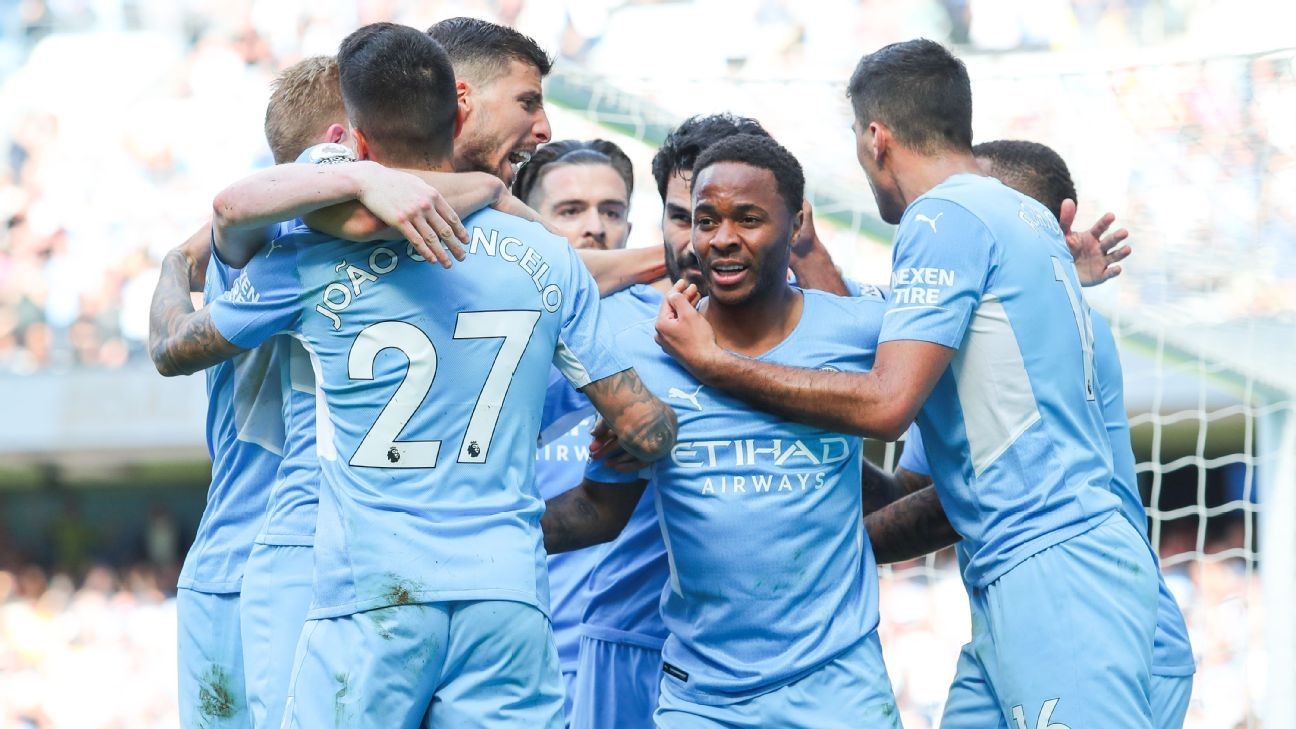 MANCHESTER, England -- Maybe this season will always be remembered for Liverpool's bid to win everything, but Manchester City deserve better than to be cast as Quadruple party poopers.

After Liverpool's draw with Tottenham Hotspur and City's 5-0 win over Newcastle United this weekend, Pep Guardiola's side need seven points from their last three games to win the title for the fourth time in the past five years. If they do it -- and with two weeks of the season left, it's still "if" -- it would be a feat only previously achieved in the Premier League era by Sir Alex Ferguson's Manchester United. Should it happen, it's an achievement worthy of more than an asterisk at the bottom of Liverpool's quest for history.

- Which City players have been among standouts this season?
- Stream ESPN FC Daily on ESPN+ (U.S. only)
- Don't have ESPN? Get instant access

Jurgen Klopp's team have already ensured they will play in every game available to them this season -- impressive in itself -- and could yet end the campaign with the Carabao Cup, FA Cup and Champions League trophies. If City can get over the line in the Premier League, though, they will confirm themselves as the dominant force in English football. Not even Liverpool can match their level of consistent success, and afterwards, Guardiola couldn't resist a dig in the direction of Merseyside.

"Everyone in this country supports Liverpool, the media and everyone," the City manager said. "Of course because Liverpool has an incredible history behind in European competition -- not in Premier Leagues, because they've won one in 30 years -- but it's not a problem at all.

"The situation is what it is. We need to do nine points or maybe six right now, it depends what happens the next two games in terms of goal difference, but now Wednesday is the real, real final for us.

"We are going to try to win there. Our destiny is in our hands and this is important. We have to look at ourselves. With one point or three points, nothing's changed. We have to do it."

It's testament to how quickly football can change that a game against Newcastle that was meant to be a test of City's mental strength following their heartbreaking Champions League exit to Real Madrid ended up being an opportunity to put one hand on the Premier League trophy. Guardiola spent his usual Friday news conference talking about the possible psychological scars left by the late capitulation at the Bernabeu, but as it turned out, the best tonic was a Son Heung-Min goal at Anfield.

Tottenham's 1-1 draw at Liverpool on Saturday night eased the pressure ahead of Newcastle's visit to the Etihad, and a fixture that could have been awkward was negotiated with relative ease. The visitors probably should have taken the lead when Chris Wood was presented with a free header six yards out but it was the only scare during an otherwise comfortable afternoon. Raheem Sterling (2), Aymeric Laporte, Rodri and Phil Foden got the goals, and with three games to play, City are three points clear at the top.

Manchester City are on the cusp of back-to-back Premier League titles for the second time in five years. James Gill - Danehouse/Getty Images

Flights back from Madrid on Thursday morning were full of supporters concerned that the chastening experience in the Champions League might prompt an implosion in the title race, but by the time Sterling scored after 19 minutes, chants of "champions, champions" were reverberating around the Etihad. Lifting the mood shouldn't be a problem ahead of the trip to Wolverhampton Wanderers on Wednesday.

Win at Molineux and at West Ham United on Sunday and City would need a point from their final game against Aston Villa to be crowned champions again. Not bad for a team who were meant to be cracking up.

"With what this team have done, do you have any doubt?" Guardiola asked. "It was the perfect afternoon. We are five years doing this every three days. If some people doubted us, they don't know this team. It's one of the best groups I ever trained in my life.

"Three points, nine points to play for, four ahead on goal difference. Another final on Wednesday [against Wolves]. The margin between us and Liverpool is so tight and goal difference can happen. It was important we win.

"Hopefully we can arrive at the Aston Villa game on the final day of the season with the destiny of the Premier League in our hands. But before that we have incredibly tough games. We are going to try."

Guardiola says he might never get over the disappointment of Madrid. An inexplicable collapse in a Champions League semifinal is a hard thing to get over, but another Premier League triumph -- potentially back-to-back titles for a second time in five years -- is more than just a consolation.

No one has got as close to a Quadruple as Liverpool are now, but it should not be forgotten that City are also within touching distance of their own slice of history.