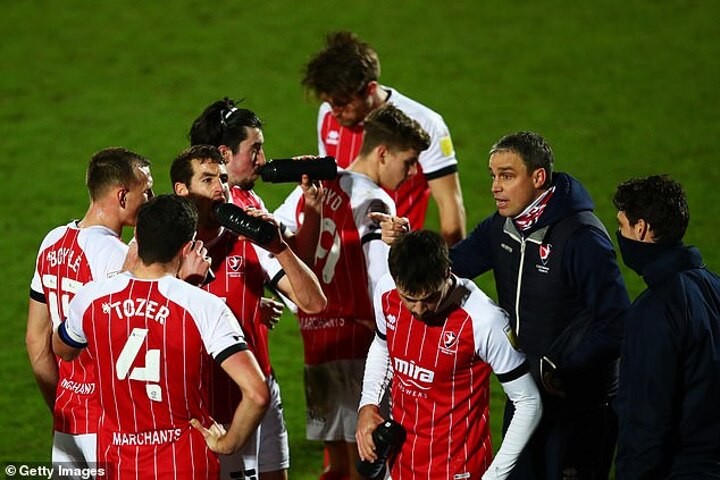 Cheltenham Town manager Michael Duff has praised Manchester City fans who 'have done the hard yards' in the lower leagues for forking out for virtual tickets ahead of an FA Cup tie they won’t be able to attend.

The Robins landed a plum draw when City came out of the hat for the fourth round, but sadly no supporters will be allowed into the atmospheric Jonny-Rocks Stadium on Saturday, due to the coronavirus pandemic.

However, the League Two club and its fans have launched an online fundraiser to generate a bit more money from the game, which have amassed more than £30,000, with City fans piling in to help.

'It's great they have got involved,' said Duff, who watched Saturday's illustrious opponents play Aston Villa in the Premier League on Wednesday evening, as he prepared for the game.

'Where they have come from, they are a bit more grounded than some. They have done the hard yards and it's great they are putting their hands in their pockets for us.'

Manchester City dropped down to the third tier (now League One) in 1998, before battling their way back and eventually returning to the Premier League, where they have won three Championships in the past seven seasons.

Among the fans helping out is celebrated photographer Kevin Cummings. The Mancunian is known for his photographs of bands and musicians including, Mick Jagger, David Bowie, Patti Smith and Joy Division to name a few.

Cummings has supplied a famous image of Noel and Liam Gallagher for the from cover of the Robins’ programme, which is on sale for £5, with profits split between the club and a food bank charity, Fair Share.

Meanwhile, Duff , whose side sit sixth in League Two, is preparing his players for a bigger challenge than they have ever faced when City line up against them on Saturday evening.

‘We are excited, but trepidatious,’ said the former centre back who played 45 times for Cheltenham and made 377 appearances for Burnley. ‘They can make very good teams look very silly.

‘They almost play a different sport to what we do week in week out. We are trying to teach and coach our players and they will see the game played by the best.’

Duff has a good idea what is in store for his team having worked his way up through the leagues in his playing days and taken on City in the Premier League with Burnley.

‘I remember playing against Sergio Aguero and I never saw him for 90 minutes.

‘They will come off with their lungs coming out of their mouths, probably, because they will make us work. But you never know.’

Duff said he would settle for a winner ‘off someone’s backside or straight from a goal kick’, which is how Cheltenham conceded an equaliser in a 1-1 draw at home to Newport County on Tuesday night.

‘We will have to change how we play. We will not be taking them on in a football match,’ said Duff, whose side usually like to pass the ball on their high-quality pitch ‘We will be making it as difficult as possible.’

Duff has seen both ends of the spectrum against City. He was in the Burnley side, managed by Brian Laws in April 2010, which was 5-0 down at half-time at Turf Moor in a game that ended 6-1 and in the team that beat the champions in March 2015, with a second half goal from George Boyd.

Digital tickets for Cheltenham Town v Manchester City cost £10 and include an electronic copy of the souvenir ‘Kevin Cummings’ programme, team sheets and a ticket. For more information visit the Cheltenham Town website.