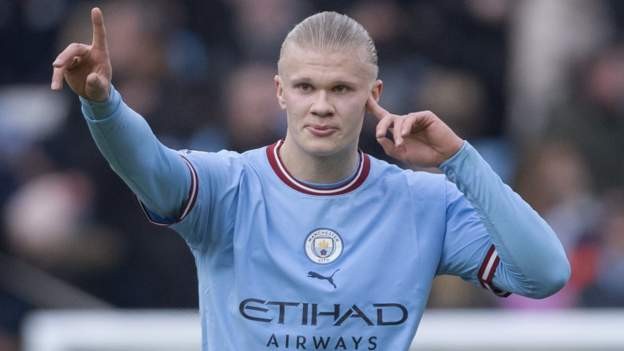 Manchester City boss Pep Guardiola says his side have had to make some changes to their playing style to accommodate the prolific Erling Haaland.

The Norway striker has scored 22 goals in 19 appearances after a hat-trick in the 3-0 win over Wolves.

Some critics have argued that City are not as good overall since Haaland's arrival from Borussia Dortmund.

"We know his quality. We cannot play a false nine with him and we have to adapt some movements," said Guardiola.

"He has to get the balls delivered as much as possible. We have fantastic players around him but the first goal is because he is there and the delivery from Kevin [de Bruyne] is fantastic."

Haaland's goals against Wolves came in a 12-minute spell either side of half-time, and only Alan Shearer has scored more Premier League hat-tricks in a single campaign.

In barely half a season Haaland has reached a third of City legend Sergio Aguero's record 12 Premier League hat-tricks, which took the Argentine a decade to reach. He needs seven goals to match Mohamed Salah's best for a 38-game season.

Haaland's efforts have come at the end of a period when his overall contribution has been questioned by some.

"This is a grey vision of this kind of thing," added the City manager.

"He lives 24 hours for his profession, job, his passion, his love. He does not stress much when it is going good or bad. He is stable. He feels the defeats.

"When he scores I don't know how many hat-tricks and goals, he is the solution in our team. But when he does not score a goal he is a problem in our team."

After dropping four points in three matches, City have responded with successive victories in a four-day period that has fuelled optimism about a title challenge, although Guardiola accepted it was 'only one game' when asked about the response following his rant at the end of the win against Tottenham last week.

England midfielder Phil Foden was a surprise absentee from the City squad.

Guardiola revealed Foden had suffered a foot injury during a challenge with Aaron Wan-Bissaka in the Manchester derby at Old Trafford on 14 January.

Although he was on the bench for the Tottenham game, Guardiola said the injury had not improved.

"He is struggling," he said. "It's painful, then after two or three days' rest it gets better. Then he starts and it goes.

"He cannot train well and is feeling a bit uncomfortable so we decided all together for him to have a few days off to see if he gets better."

All the latest Manchester City news, analysis and fan views in one placeYou can now get Man City news notifications in the BBC Sport app - find out more