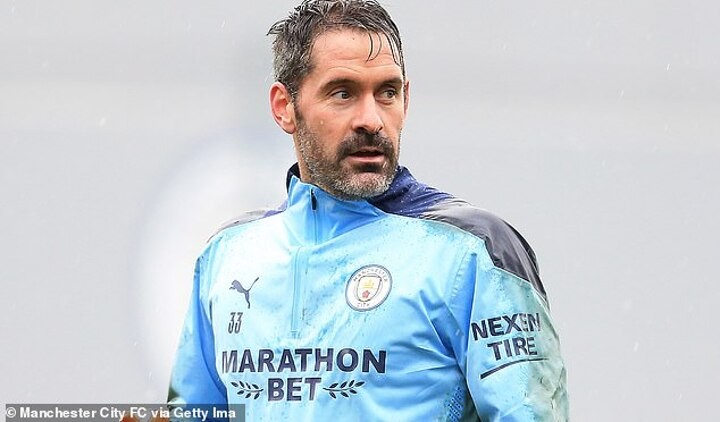 Deby County have angered Manchester City by blocking Pep Guardiola's attempt to sign Scott Carson on a permanent deal, because of the Championship club's insistence on collecting a loan fee this month to help pay overdue wages to their players.

The former England goalkeeper, 35, has been on loan at the Etihad Stadium for the last two seasons, with City paying Derby instalments of around £500,000 twice a year to cover the loan fee and Carson's wages.

City want to make Carson's signing permanent during this transfer window and are ready to offer him an 18-month contract.

But they are struggling to open negotiations with his parent club. Derby are unwilling to cancel their loan agreement with City for Carson as they need the £500,000 due this month to help pay the wages of other players at Pride Park after failing to pay Wayne Rooney's squad their full salaries last month.

The first instalment of this season's fee was paid by City last August.

Carson is understood to feel aggrieved at Derby blocking his proposed move to City as it could cost him the chance of a further 12 months at a top Premier League club and potentially bring a premature end to his career.

The veteran has not played a single minute for City's first team in 18 months at the club but has developed a good relationship with fellow goalkeepers Ederson and Zack Steffen, who are eager to keep working with him.

Derby's reliance on City's loan fee to pay their wage bill provides a stark illustration of the club's financial plight, with a proposed takeover by Sheik Khaled still to be completed.

Chief executive Stephen Pearce told Derby's players last week that the club were unable to pay the rest of their December wages until the takeover was signed off.

But that did not stop them announcing the appointment of Rooney as manager on a permanent basis two days later.

Rooney is also yet to receive his December wages, and neither have coaches Shay Given and Liam Rosenior, with all three remaining on their previous contracts despite being promoted.

Derby's precarious position is exacerbated by a loan from American private equity firm MSD Capital, who will take control at Pride Park if the club default on the repayments.

Rooney's struggling side are 23rd in the Championship table.