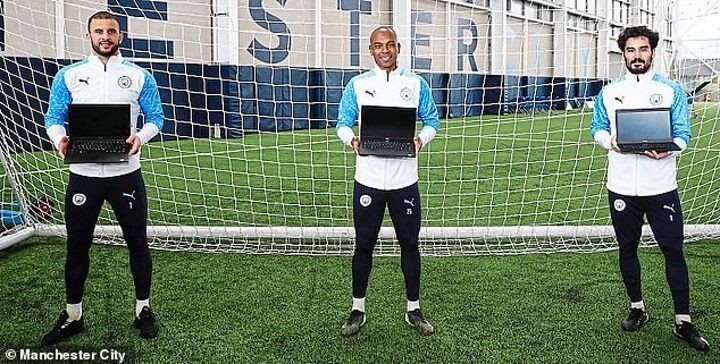 Manchester City have donated hundreds of laptops to schools in a big-hearted move inspired by Mail Force's Computers for Kids campaign.

The runaway Premier League leaders have targeted local children who live in some of the most deprived areas of the country. The club are understood to have spent a six-figure sum on ensuring they can get online.

'At City, we are proud to have a long and strong connection with our Manchester community and particularly with young people across our city,' he said.

'However, the pandemic has meant that we have had to find different ways to reach out to those in our neighbourhood and the Computers for Kids campaign is a very good way to do just that.'

The Brazil midfielder, a key figure in the march of Pep Guardiola's side to the top of the table, added: 'As a father of two, I can see at first hand the importance of technology in keeping our young people connected. But I am also aware that on our doorstep, there are so many who simply don't have access to this kind of equipment.'

Hundreds of specially-created packages are to be sent out next week from the Etihad Stadium to youngsters at 13 primary and secondary schools across east Manchester and beyond.

The bundles include Dell laptops, with EE data packs so kids can jump straight online regardless of whether they have Wi-Fi at home.

In another big-hearted move, City's IT team are giving up their time to assist with set-up in a project worth a total of £100,000.

The donation will assist hundreds more children on the wrong side of the 'digital divide'.

On Thursday, Mail Force oversaw a shipment of more than 5,000 devices to schools in more than 100 towns and villages in a campaign backed by each of the six living Prime Ministers.

Janice Allen, head teacher at Falinge Park High School in Rochdale, which is one of the recipients, outlined the importance of City's donation.

'Access to laptops is a major challenge for our pupils, not only when they are required to study from home but also when they return to the classroom,' she explained.

'This donation will make a great difference to our students' access to education.'

Greg Swimer, chief technology officer for City Football Group, said: 'Although our local kids are facing a number of barriers to learning in the current climate, we didn't want technology to be one of them.'