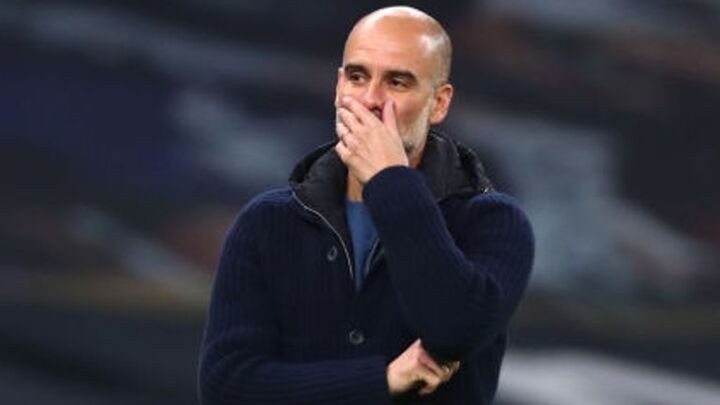 Wolves striker Jimenez was stretchered off following a clash of heads with Arsenal defender David Luiz and has since had an operation on a fractured skull.

The incident, which occurred early in the match and resulted in a lengthy delay of around 10 minutes as paramedics and medical staff saw to both players, has reopened a conversation about how football deals with potential on-field discussions.

Brain injury association charity Headway released a statement on Monday expressing its "anger and disappointment at football's continued failings to protect its players from concussion" and reiterated its view that temporary concussion substitutes are "urgently" needed.

Speaking ahead of City's Champions League game against FC Porto, Guardiola said: "Hopefully Raul Jimenez and David Luiz find they are well and I have heard that Raul Jimenez has had an operation so that hopefully has gone well.

"Because head injuries are so dangerous but hopefully they (Luiz and Jimenez) are doing well."

Manchester City confirmed their place in the Champions League knockout stage with a win over Olympiacos last week and Guardiola confirmed he will make team changes for Tuesday night's game in Portugal.

"Sergio Aguero didn't train (on Monday), it is nothing serious but he did not train," Guardiola said. "We have 19 players to choose from for the game and we will look at rotating.

"Porto is a very difficult opponent and we need to select the best players possible."

Headway: How many warnings does football need?

Brain injury association charity Headway released a statement calling for urgent action on the issue of player head injuries, following the incident in Sunday's game which also left David Luiz with a bandaged head after receiving seven stitches in a three-inch wound.

The Brazilian returned to the pitch but was withdrawn at half-time with Rob Holding his replacement.

Headway questioned whether Luiz would have been cleared to continue if concussion substitutes were in place.

Luke Griggs, deputy chief executive at Headway, said: "Too often in football, we see players returning to the pitch having undergone a concussion assessment - only to be withdrawn a few minutes later when it is clear that they are not fit to continue.

"That is the very reason why we urgently need temporary concussion substitutes in football. You simply cannot take a risk with head injuries. They are not like muscular injuries where you can put a player back on 'to see if they can it if off'. One further blow to the head when concussed could have serious consequences.

"The question that has to be asked is had the concussion substitutes rule been in place, would Luiz have been allowed to return to the field of play? Would that extra time in the treatment room have led to a different decision being made?

"The concussion protocol clearly states that 'anyone with a suspected concussion must be immediately removed from play', while the sport continues to promote an 'if in doubt, sit it out' approach to head injuries.

"Time and time again we are seeing this rhetoric not being borne out by actions on the pitch. Something is not right. This cannot be allowed to continue. How many warnings does football need?"