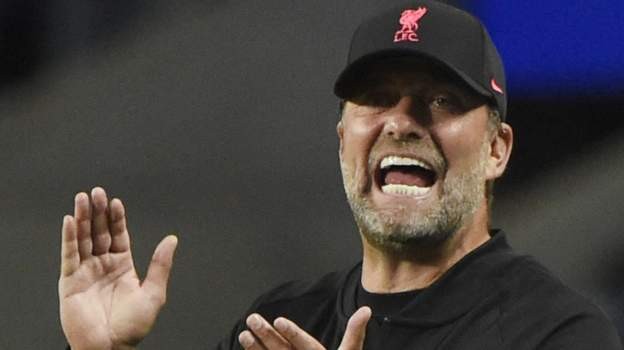 While the Reds thrashed Porto 5-1 in the Champions League on Tuesday, last term's runners-up City lost 2-0 at Paris St-Germain.

"City will want to strike back for sure," said Klopp.

"But we are at home finally after a few games [playing away] without our crowd, so let's give it a go."

Premier League leaders Liverpool go into Sunday's fixture unbeaten in all competitions this season and looked in sparkling form at the Estadio do Dragao, inflicting another heavy defeat on the Portuguese side.

However, Klopp, while stressing the importance of the result, says that there are still areas for improvement - and momentum alone will not suffice against Pep Guardiola's reigning top flight champions.

"First and foremost, the most important thing is the result. It is a massive one away at Porto. Winning, and the way we won, makes it better," Klopp added.

"It was good in lots of moments. We could see Porto watched our last game at Brentford. They started direct. I wanted to get it sorted on the pitch and that's what we did step-by-step.

"We scored maybe not the most amazing goals but important ones in the first half. In the second half we controlled the game. It [momentum] always helps, but against City it does not help alone - we need more things than only momentum.

"We need to play better than we did tonight, that is clear anyway. It will be a completely different game."