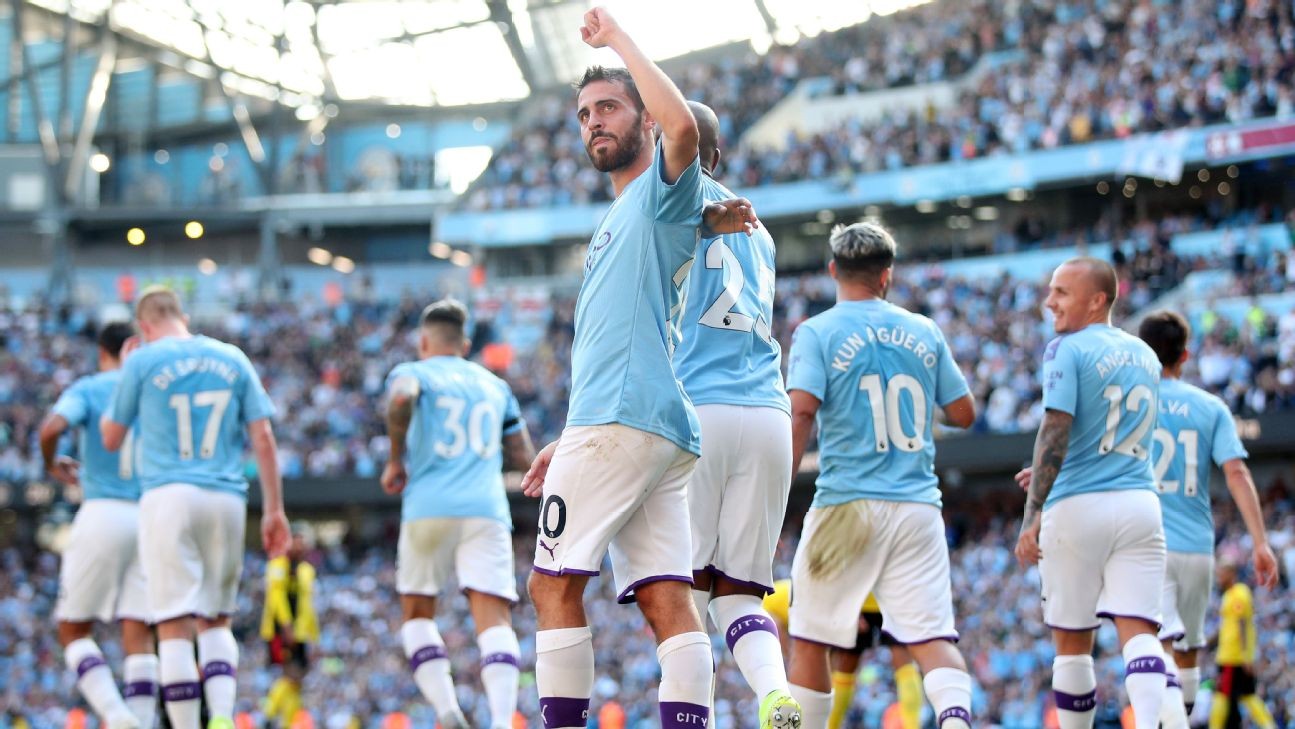 Alejandro Moreno says Manchester City could have scored far more in their 8-0 win vs. Watford, and he wanted to see them do it.

MANCHESTER, England -- It became a goal chase in the end and, but for a late miss by Kevin De Bruyne, Manchester City would have written another piece of history under Pep Guardiola by equalling Manchester United's Premier League record victory margin of 9-0.

United's record dates back to their 9-0 defeat of Ipswich Town at Old Trafford in March 1995, when Andy Cole scored five times that day for Sir Alex Ferguson's team. And when City went 7-0 ahead against Watford with 30 minutes still to play, the smart money was on Guardiola's all-stars erasing their neighbours from the record books rather than merely matching their achievement.

But as the final whistle blew on an 8-0 win at the Etihad on Saturday -- City's biggest-ever top-flight victory -- United's record survived for another day. Yet it would be foolish to believe that it will not be threatened again this season by Guardiola's team.

This was an emphatic dismantling of a Watford side still haunted by the memories of last season's 6-0 FA Cup final mauling at the hands of City, yet it was by no means an exceptional performance by the reigning champions. That is the scary thing about this City team: What would be exceptional for everyone else is now becoming the norm at the Etihad.

Since Ferguson retired as United manager at the end of the 2012-13 season, the Old Trafford outfit have scored five in a Premier League on just one occasion: in Ole Gunnar Solskjaer's first game in caretaker charge, against Cardiff City, last December. Under Guardiola alone, since the Catalan's arrival as coach in the summer of 2016, this was the 15th time they have scored five or more in a Premier League game.

Liverpool have managed five or more goals in a game 10 times under Jurgen Klopp, but when it comes to scoring six or more, City have done it 11 times in the post-Ferguson era compared to Liverpool's three. United? They have still to score six in a game since Ferguson retired.

And just to underscore the regularity of City hitting opponents for big scores, this win against Watford means that, in 2019, they have scored seven or more in a game in the Premier League, Champions League, FA Cup and Carabao Cup.

And the painful truth for Watford is that, in the end, they got off lightly with an 8-0 defeat. City's winning margin could, and should, have been well into double figures. De Bruyne's late miss was the one that cost them a 9-0 win, but the reality is that Sergio Aguero and Riyad Mahrez both spurned several clear chances between them.

By opening the scoring after just 53 seconds through David Silva, City ensured that Watford's cup final flashbacks were triggered quicker than they could possibly have feared.

Who knows how the game would have shaped up had City goalkeeper Ederson not kept out Gerard Deulofeu's goalbound effort on four minutes? It was a crucial save because, by the 15-minute mark, City had rattled in three more, through Aguero, a Tom Cleverley own goal and the first goal of Bernardo Silva's hat trick.

When United put nine past Ipswich, it took 15 minutes to open the scoring. City were already four up by that stage.

Watford didn't help themselves at times, naively chasing the game rather than putting up the shutters. They clearly hadn't learned the lessons of the FA Cup final. So City -- with Raheem Sterling rested on the substitutes' bench -- poured forward, picking holes in Watford's midfield and defence and it was 5-0 on 18 minutes after Nicolas Otamendi slid in to convert Aguero's cross at the far post.

Following an 8-0 win over Watford, Manchester City have come to expect the exceptional.

Despite the scoreline at that point, Guardiola claimed after the game that his team rode their luck.

"It was weird, not normal, five shots and five goals," he said. "At the same time, they had two chances, so we were lucky."

City were not lucky. They were simply unstoppable, and it looked as though they would go on to become the first team to hit double figures in a Premier League fixture.

The sixth arrived four minutes into the second half when Bernardo scored his second, and the Portuguese midfielder sealed his hat trick on the hour, making it 7-0 with a scuffed shot that beat Watford goalkeeper Ben Foster from close range. So with more than 30 minutes left to play, United's 9-0 record appeared to be well within City's grasp.

Watford continued to struggle to contain their opponents, but City began to misfire in front of goal.

Still, when De Bruyne made it 8-0 on 83 minutes, the whole stadium was waiting for the ninth. Even the Watford fans stayed on, seemingly wanting to witness a piece of history, despite their team being on the wrong side of it.

The ninth goal did not come, but there is a sense of inevitability about City. It didn't happen on Saturday, but it will probably happen sooner rather than later.

As for Watford, "sorry" wasn't the hardest word for coach Quique Sanchez Flores.

"I can only say sorry to our fans," he said. "They came to the stadium waiting for a performance, but it was very difficult on the pitch today.