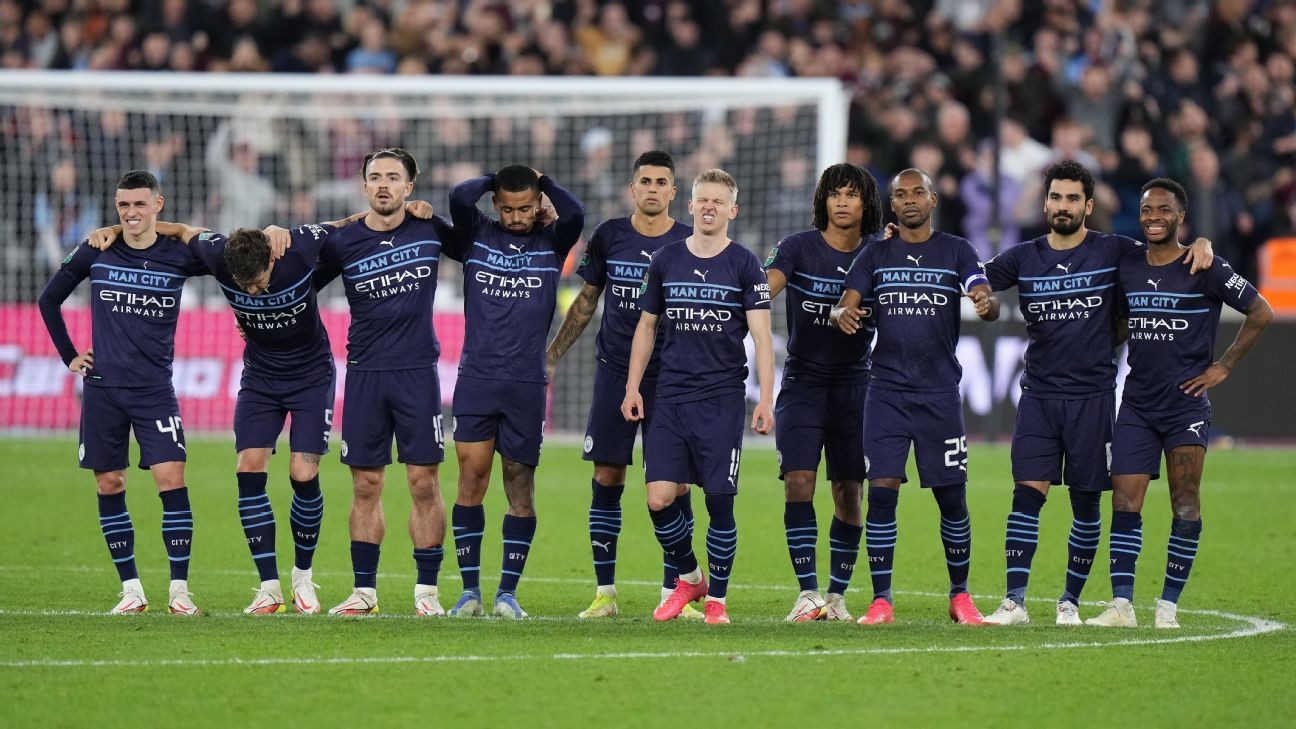 LONDON -- Make a note of the date. Manchester City have finally been knocked out of the Carabao Cup. Five years and one day since Pep Guardiola's team last suffered elimination from the competition, West Ham United's 5-3 penalty-shootout victory, after a 0-0 draw at the London Stadium, ended one of the most remarkable records in top-level football.

Not since Jose Mourinho's Manchester United -- yes, Jose Mourinho -- have City lost a Carabao Cup tie. Since that 1-0 defeat at Old Trafford in October 2016, City have won four successive Carabao Cups and equalled the record for consecutive wins set by Liverpool between 1981 and 1984.

Liverpool's run was brought to an end in a third-round defeat by Tottenham Hotspur in October 1984, so City can ultimately say they went one better than the Anfield side by taking the defence of their crown into the fourth round of their attempt to achieve five-in-a-row.

"An incredible run has finished," Guardiola said. "We finished in a good way. We played in a really good way, creating chances against a team who defended deep. On penalties, they were better.

"But congratulations to West Ham, they are a fantastic team with a fantastic manager. But next year we will be back."

Such has been the length of their incredible dominance of this competition, youngster Cole Palmer, who started the game in City's forward line, was still at school the last time Guardiola's team were knocked out of this cup before Christmas. All runs and periods of dominance come to an end -- you only need to ask supporters of Barcelona and Manchester United right now for proof of that.

However, this defeat at West Ham does not signal the end of City's winning days under Guardiola. If anything, it highlights just how imperious they have been since the former Barcelona and Bayern Munich coach arrived at the Etihad Stadium in the summer of 2016.

One significant statistic from that defeat at Old Trafford five years ago is that only one player on duty for City that night -- Raheem Sterling -- remains at the club today. By contrast, six of United's players from that win are still in their squad, which highlights the ruthless pursuit of success at City and the more patient, and unsuccessful, approach across town at United.

Under Guardiola, City have constantly strived to move forward, so players have come and gone, but the winning mentality has remained as intense. That is why City were still hunting down a winner in the dying seconds against David Moyes's team in London.

During the three minutes of stoppage time at the end of 90 minutes, Phil Foden almost scored with a left-foot shot from 20 yards while Sterling forced Hammers goalkeeper Alphonse Areola into a crucial save with a header with virtually the last touch of the game. West Ham had also gone close, with Tomas Soucek missing two good second-half chances, but City were the dominant team after Guardiola had gone strong with his starting eleven.

Moyes surprisingly made eight changes from the team that beat Spurs at the weekend, with neither Declan Rice nor Michail Antonio involved in the matchday squad, and it seemed to be an almighty gamble by the former Everton manager considering the strength of Guardiola's side. But West Ham, backed by a capacity crowd, were able to ride out periods of heavy pressure to take the game to penalties.

Having overseen a 100% record of five wins from five shootouts as City manager, four of which have come during the five-year streak in this competition, Guardiola would have been confident in his team's chances. But Foden's failure to score City's first penalty, with the England midfielder shooting wide of the post, gave West Ham an advantage they did not waste as Mark Noble, Jarrod Bowen, Craig Dawson, Aaron Cresswell and, with the decisive kick, Said Benrahma all beat City keeper Zack Steffen from the spot.

Benrahma's penalty sealed City's fate and finally loosened their grip on the Carabao Cup. But the fact that they took it all the way to penalties showed just how determined Guardiola and his team are.

This was West Ham's night, though. City now just have the Premier League, Champions League and FA Cup to worry about.