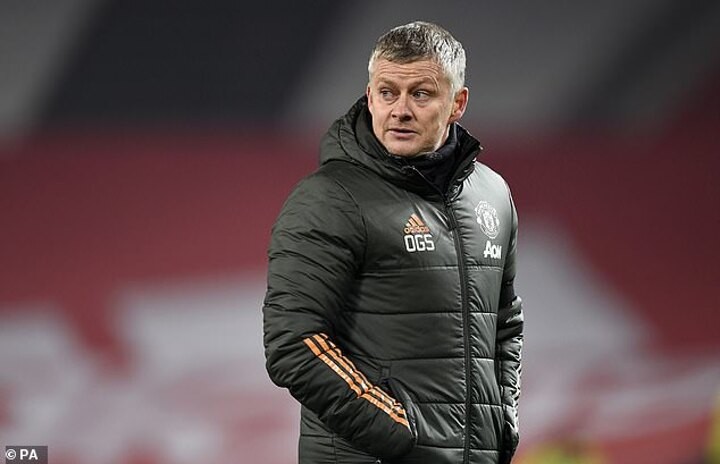 Having waited so long for Manchester United to return to the top of the Premier League, few expected it to happen this season.

Now they are there, what does it mean? If they don’t manage to stay there, maybe not very much.

Perhaps with this in mind, United’s own manager Ole Gunnar Solskjaer cut to the heart of the matter very well, in advance of Sunday's visit to Liverpool.

‘This a test and reality check of where we’re at,’ said Solskjaer. ‘We’ve recently won many tight games, scored a few goals in injury time, showed that good mentality. But we’ve not really set the world alight too many times and to win at Anfield you really need to be at your best level.’

There has been a degree of giddiness around since Tuesday night’s win over Burnley took United top. For the Premier League, it makes a change from seeing Liverpool or Manchester City in first position. For United supporters embarrassed by recent regression, it hints at brighter days.

But Solskjaer’s analysis was appropriate. United have improved and for that he takes credit. But by how much?

Their last three league victories — against Burnley, Aston Villa and Wolves — have been by a single goal. Against City in the Carabao Cup less than a fortnight ago, they were well beaten.

So perhaps Sunday will tell us if Solskjaer has genuinely moved United back into elite company or whether modest performances against other big clubs — league draws with Chelsea and City at home and defeats by Tottenham and Arsenal — actually remain a more accurate indicator of status. Undoubtedly, this is a good time to play Liverpool. United’s away form is exceptional while Jurgen Klopp’s champions are down on numbers, form and confidence.

There has been no joy about Liverpool’s recent football while United run hot on confidence. Make no mistake, this is an opportunity for United to make as big a mark on any single competition since Sir Alex Ferguson stood down in 2013.

‘Everyone wants to be the champion and everyone wants to beat them,’ said Solskjaer, veteran of six title wins as a player at Old Trafford. ‘Liverpool have earned the right to be looked up to. Our position at the moment is a product of all the hard work we’ve done every single day.

‘We probably deserve to be where we’re at. But six weeks ago I don’t think many would have thought of another word for it than an ‘upset’ if we beat Liverpool at Anfield. It would be a shock’.

United’s improvement is such that they have eleven more points than this time last season. Liverpool, on the other hand, have sixteen points fewer.

Key to the improved fortunes of Solskjaer’s team has been the enduring quality brought to them by playmaker Bruno Fernandes and the fact they have suffered so few injuries. It will be interesting to see if there will be any change to either between now and the season’s end.

Klopp acknowledged on Friday that Liverpool had been aware of Fernandes when he was at Sporting Lisbon. ‘You could really see he was a difference-maker, and that’s what he shows now,’ said Klopp.

‘He’s settled, very influential for United. People talk mostly about goal involvements, which is very important, but it’s also his link-up. He’s involved in a lot of other situations.

‘He seems to be a leader as well, so yes, good singing. Unfortunately!’

Liverpool are unlikely to make any special arrangements for Fernandes on Sunday. Of greater concern will be what they do with the ball when they have it.

United are not proficient enough to dominate possession against the really good sides so their best hope will be to play the kind of counter-attacking football capable of laying waste to teams.

Liverpool simply have to be better than they recently have been. They will need more from players such as Mo Salah, Trent Alexander-Arnold and Thiago Alcantara. They will also need to defend better. Liverpool continue to feel the absence of Virgil van Dijk more and more and there is a danger here that players like Marcus Rashford and Mason Greenwood may blow right through them.

‘We have to be dominant in the game,’ was how Klopp put it on Friday and he was absolutely right.

A win for United would see them six points clear of Liverpool, but not of the rest. City, for example, will be only a point behind if they win their game in hand. There are more than two teams in this league.

Nevertheless, victory would represent the most significant single achievement of Solskjaer’s two years in charge so far.

‘We are the challengers, we are the hunters,’ said Solskjaer. ‘Winning at Anfield remains one of the great challenges.’