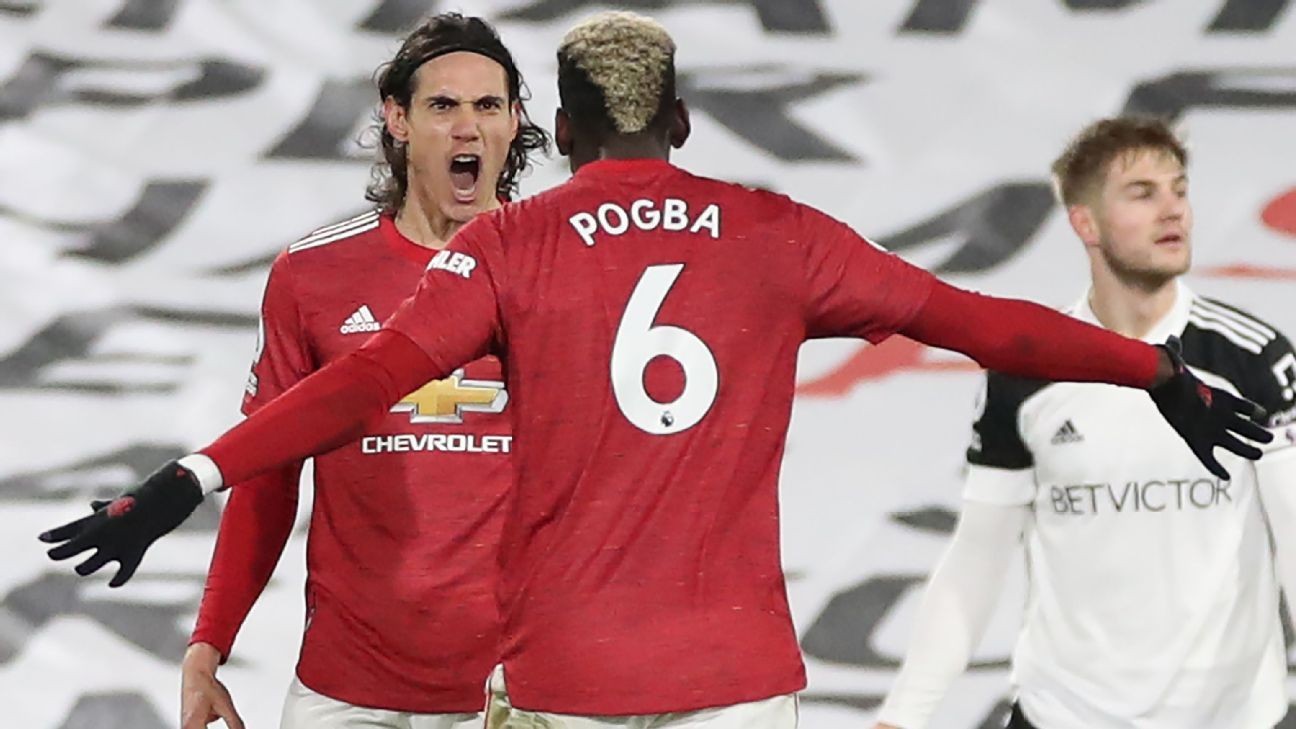 LONDON -- Sir Alex Ferguson often used to suggest that Manchester United like "doing things the hard way," but this incarnation are taking things more literally than surely even Ole Gunnar Solskjaer would like.

United returned to the top of the Premier League on Wednesday with a 2-1 win at Fulham in which they were required to come from behind yet again and beholden to a moment of magic from Paul Pogba for the second midweek in succession. It takes the number of points United have won from losing positions this season to a staggering 21, more than half their total of 40.

While the pattern of falling behind this season points to a more profound, perhaps COVID-related explanation, Solksjaer offered a unique reason why they struggled into stride at Craven Cottage.

"To be fair and to be honest, I don't blame the players," he said after the match. "Sometimes it takes a little while to get started. In these circumstances, the environment we live in, the time in history we live in, it is not easy. We stayed in a hotel all day. We were looking for a pitch to do a training session this morning to freshen our heads and freshen our legs. We couldn't find anywhere because of the COVID of course and the bubbles.

"I think we have to look at the reaction. That's brilliant. I would not blame the players for once in a while starting a bit slowly. I think these times are so strange and difficult for everyone."

The good news is that they keep finding a way to win. Sunday's 0-0 draw at champions Liverpool, tempered as they were by a more cautious approach, remains the exception.

Pogba missed a glorious chance to win the game at Anfield, but he capped a superb individual display here to turn this encounter in the visitors' favour, showing excellent control to bring a high looping clearance under control, work the ball on his left foot and unleash a superb curling 20-yard effort into the far corner.

"I hit the ball well," Pogba told BT Sport after the match. "I didn't expect it with the left foot like this but if you don't try, then you don't score. It was a beautiful goal and beautiful win. It wasn't my favourite goal ever but it was still beautiful.

"I was really mad after the Liverpool game for not scoring the chance. I maybe should've done better but today it went in. Most important was the win today. We did it the hard way and did it the beautiful way."

United deserved their win for controlling possession and carrying the greater threat, but how they ended was a world away from how they began as Ademola Lookman broke the offside trap to collect Andre-Frank Zambo Anguissa's pass and fire a low shot past David De Gea. United looked as though they had stopped playing in anticipation of an offside flag that never came, but the truth is they hadn't even started.

Paul Pogba proved the difference for the second time in a week as his goal earned Manchester United a win at Fulham. Getty

It was the seventh time they had fallen behind on the road this season and, having won their previous six, there was no sense of panic. Their route back into the match owed plenty to Fulham goalkeeper Alphonse Areola, however, who spilled a Bruno Fernandes cross to allow Edinson Cavani to score his fifth United goal.

Fernandes had hit the post with a trademark half-turn and shot from the edge of the box moments earlier but that was the first sign of life from United. Thereafter, they took control.

Solskjaer made three changes to the team that faced Liverpool with Eric Bailly, Mason Greenwood and Cavani coming in, but the most significant change was dropping Pogba into a deeper central midfield role alongside Fred. It may not come across on television but a sign of how engaged Pogba is these days was clear to those inside Craven Cottage: Pogba could be heard regularly talking his teammates through passages of play and constantly offering himself as an outlet to take the ball off the back four.

Despite playing in front of United's defence, Pogba made 56 passes in the opposing half -- more than any player on either team -- and made the difference for the second time in a week after his match-winner at Burnley. Pogba's form at present is easing the creative burden a little on Fernandes but peripheral displays from Anthony Martial and Mason Greenwood underlined how palpably vital the Portuguese is to United maintaining their impressive run.

United haven't always recovered from slow starts like this, losing the two games they fell behind in at Old Trafford, and they survived a couple of late scares here, with De Gea saving well from Ruben Loftus-Cheek 15 minutes from time. The Spin No. 1 could only watch as substitute Aleksandar Mitrovic's stoppage-time header hit Bailly and drifted inches wide of his right-hand post.

As it was, United remain the only unbeaten Premier League team on the road this team and have now equalled their club record of 17 Premier League away games without defeat, a tally originally set by Ferguson's all-conquering 1999 Treble-winning side. Nobody could fault United's resolve, but in what is surely a title race of fine margins -- United became the third team to top the table on Wednesday alone after Leicester City and Manchester City -- they surely cannot keep putting themselves under this sort of pressure and sustain a challenge into the spring and beyond.