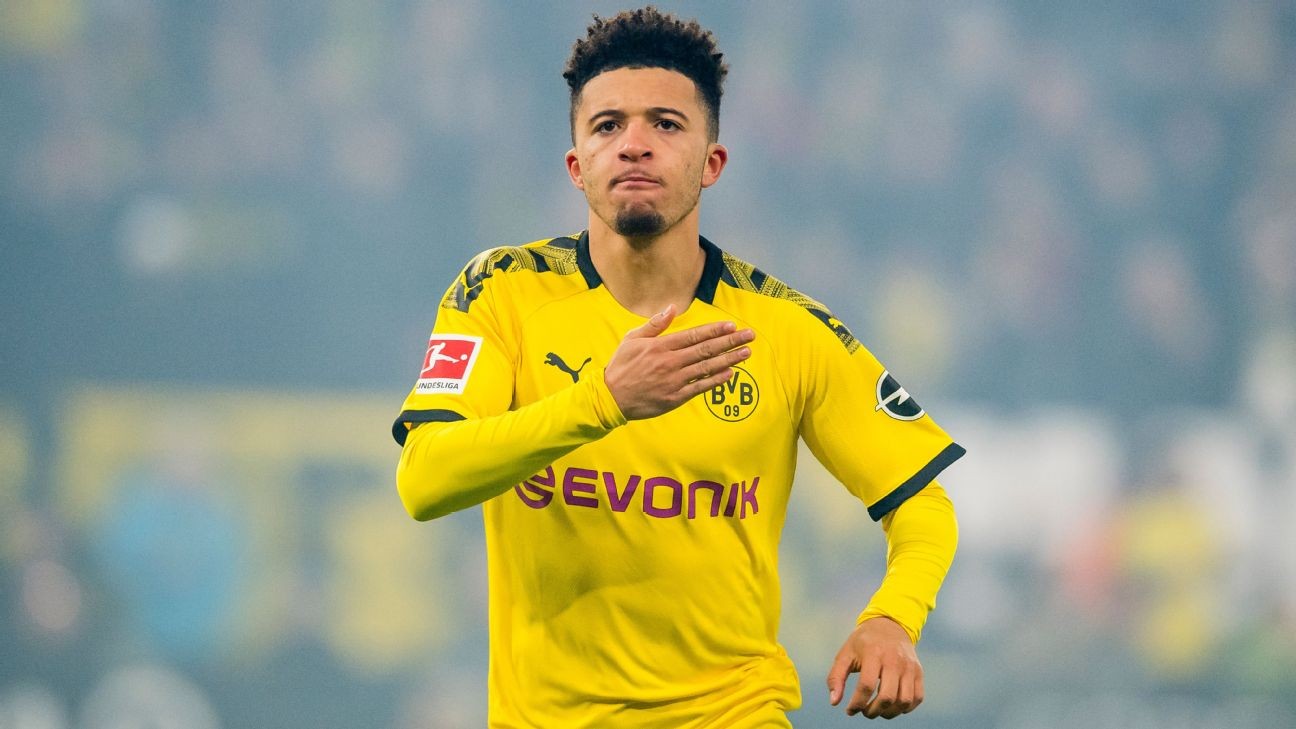 In this edition, Manchester United face a battle to land their top target, Pep Guardiola was slapped on his head during training, and Monaco face a big sale. PLUS: Barcelona stars have been winning ... on the horses.

United vs. Bayern for Sancho

Manchester United face competition to land Borussia Dortmund's Jadon Sancho this summer, with sources telling ESPN that Bayern Munich made enquiries about him before the coronavirus shutdown.

Sancho has a contract until 2022 at Dortmund, but there is an agreement in place between club and player that will allow him to leave this summer if someone meets his asking price, which is believed to be around €120 million. While the looming transfer market is largely an unknown given the state of the game on and off the pitch amid the coronavirus crisis, sources have told ESPN that Dortmund believe they can still hold out for a major fee instead of accepting a cut-price deal.

Manchester United manager, Ole Gunnar Solskjaer, sees Sancho as one of the key pillars in his United rebuild and sources have told ESPN that United are the favourites to land him, but they have a battle on their hands to convince the 20-year-old to leave Germany.

Bayern are also in the market for Manchester City's Leroy Sane, who remains a priority target, but sources have told ESPN they are keeping their options open and will press ahead with a bid for Sancho if any move for Sane stalls.

Any bid from Bayern is likely going to have to include a premium given that they would be after yet another key player from their main league rivals. Sources have told ESPN that Dortmund do not want to keep pushing the narrative that they are a feeder club for their domestic rivals. Mario Gotze, Robert Lewandowski and Mats Hummels have all left Borussia for Bayern in high profile deals in the past.

Bayern are eager to create a team that can push for Champions League glory again, having last won it in 2013 after beating Dortmund 2-1 at Wembley. -- Stephan Uersfeld

Borussia Dortmund's Jadon Sancho is a man in demand.

Pep Guardiola introduced a new game at Manchester City training following his arrival at the club four years ago, which is still in action today.

Each player has to pass the ball as close as possible to a defined line on the training pitch, with the closest being crowned the winner. However, if your ball goes over the line, you're eliminated.

One day last season, Guardiola decided to play his game with some of the players. In his first attempt, he sent his ball over the line, immediately finishing last. That day, the penalty was a slap behind the head.

Benjamin Mendy and Bernardo Silva were among the players involved. Before Guardiola received his forfeit, he jokingly said: "Watch out how hard you slap me because I have not yet decided who is playing this weekend!"

Maybe worried about not being picked, Silva was very kind and only brushed the back of his manager's head. Mendy, on the other hand, was more generous with his slap while bursting with laughter like everybody else.

Both Bernardo and Mendy started that weekend, by the way. And City won. -- Julien Laurens

Barcelona stars win on the horses

Barcelona defender Clement Lenglet has joined Antoine Griezmann in the stables. His horse, a 3-year-old colt named Bois D'Argent, was a winner at the Chantilly Racecourse north of Paris on Monday as he began to see a return on his investment into horse racing.

It was the first time that relative newcomer Lenglet has seen one of his horses win a race, but it's a feeling Griezmann has grown accustomed to. A source close to the Barca and France forward told ESPN he's already seen a return on the money he's put into the sport over the past two years.

Griezmann, in partnership with horse racing owner Ecurie Seyssel, founded the company Ecurie Griezmann in 2019 and has owned a number of winning horses: Tornibush, Fleirel Vedaquais, Fripouille, Lily of Spain and Glenn Miller have all had success on the track for the Barca man.

Lenglet and Griezmann were among the Barca players who returned to training on Monday, with La Liga hoping to resume in June. -- Sam Marsden

It is a huge summer transfer window coming up for Monaco. The French club are struggling financially after two very disappointing seasons in a row, with a ninth-place finish this year following last season's 17th place, which took away Champions League TV rights revenues. But most dramatically, the club must handle the financial implications of having an incredible number of players under contract.

Monaco have 64 players on their books, including 24 on loan. The club wants to sell or let go at least 30 of them. Some, like Danijel Subasic, Jemerson, Diego Benaglio and Moussa Sylla, are out of contract this summer and will leave. Others, including Islam Slimani, Adrien Silva and Tiemoue Bakayoko, were on loan in the Principality this season and won't be signed permanently. Underperforming players on huge wages, like Cesc Fabregas, also face uncertain futures.

The club is making clear when talking to agents that everyone is on the market and everyone has a price. Of course, ideally, they would like to keep Wissam Ben Yedder, their best player this season, and/or Aleksandr Golovin. But those two are Monaco's biggest assets if they need to raise cash.

Monaco aren't just paying for their bad results, but also their risky business model. They bought a lot of young players in the past few years at a high cost (Willem Geubbels and Pietro Pellegri, for example) to develop them and then sell them on for more money. But it has not worked recently and as a result, the club is facing an unprecedented situation. -- Julien Laurens

Manchester United's owners, the Glazer family, will risk further criticism from the club's supporters next month when they receive an £11m dividend payment, despite the announcement this week that United's debt has climbed £127.4m to £429.1m in the space of 12 months.

As revealed in the club's accounts last year, the Glazers stood to receive two semi-annual dividends of $0.09 a share -- approximately £11m -- in 2020, with the first being taken out in January. The Americans will receive the second £11m payment on June 3.

The COVID-19 crisis, which led to football in England being suspended on March 13, has hit United financially, with the club confirming on Thursday they expect to have to pay a £20m rebate to the Premier League broadcast rights holders as a result of the fixture schedule being halted during the shutdown.

But the Glazers will continue to receive their dividend because, according to United sources, the commitment to make the June payment was made to shareholders on Feb. 25.

Any cancellation of the dividend would involve reneging on a legally binding commitment and could potentially have undermined investor trust in United.

There is also a view within Old Trafford that the club's ability to make the payment reflects United's financial resilience during such challenging times. -- Mark Ogden

London is one of three host cities still to confirm its ability to stage games at next year's rescheduled Euro 2020, sources have told ESPN.

Twelve European cities were set to stage games at Euro 2020 until it was postponed by UEFA in March amid the coronavirus pandemic. The decision to delay the tournament by 12 months was unanimously agreed by UEFA's 55 member nations, but scheduling clashes and gaining governmental authority have to be resolved in three of the host venues. It was enough to prompt UEFA to postpone next week's planned Executive Committee meeting until June 17.

Sources have told ESPN that UEFA are relaxed about the delay in signing off the three cities, but the issue of London is understood to be most pressing as Wembley is the centrepiece venue, with six games assigned to it, including two semifinals and the final. When contacted by ESPN, however, the English Football Association insisted that Wembley will host games as planned, with the hold-up being attributed to nothing more than paperwork issues with the Greater London Authority. -- Mark Ogden

La Liga wants to resume on June 12 because a longer hiatus will trigger compensation claims from TV rights holders, sources have told ESPN.

Sources have told ESPN that concerned broadcasters will seek compensation or damages if the break stretches beyond the 90-day period, which is a key factor in La Liga's desire to meet the June 12 deadline.

The league's president, Javier Tebas, has consistently said that he wants to resume on that date, exactly three months after games were suspended.

"The longer it takes to get back on air, the more pressure there is from broadcast partners," a source close to La Liga said. That pressure risks conflict with players, some of whom have publicly expressed doubts over returning so soon, with Barcelona's Gerard Pique saying "a few more days" are needed to avoid injuries.

La Liga has circulated a draft protocol on resuming competitive games to first and second division clubs, and the return to group training this week has so far proved successful.

Health authorities have not announced a final decision but the feeling around La Liga is that a mid-June return is now likely. -- Alex Kirkland

UEFA's master plan to finish the Champions League and Europa League throughout August has hit a snag after the Italian FA extended the end of the season to Aug. 20.

While UEFA's next executive committee meeting has been pushed back to June 17, sources have told ESPN that Monday's deadline for leagues to set out their plans remains in place, but no decision will be made on the future of the Champions League and Europa League until that meeting happens.

Sources have told ESPN that the original Aug. 2 date for leagues to finish was never a deadline, and that UEFA simply wanted to set a date with as much information as possible to plan for European competitions. If Serie A does run later, UEFA may need a rethink -- perhaps using one-off ties. With AS Roma, Atalanta, Internazionale, Juventus and Napoli all still in Europe, it's hard to see how the two can intertwine with UEFA planning to use both midweek and weekend match slots in August to complete the competitions in full.

One hope UEFA has is that the Aug. 20 deadline is there to provide Serie A with extra working space. Some teams have 13 rounds of games to play with the Italian FA ruling out any return before June 14, and while that does just leave enough time to complete the league season by Aug. 2, there is no room for manoeuvre. -- Dale Johnson