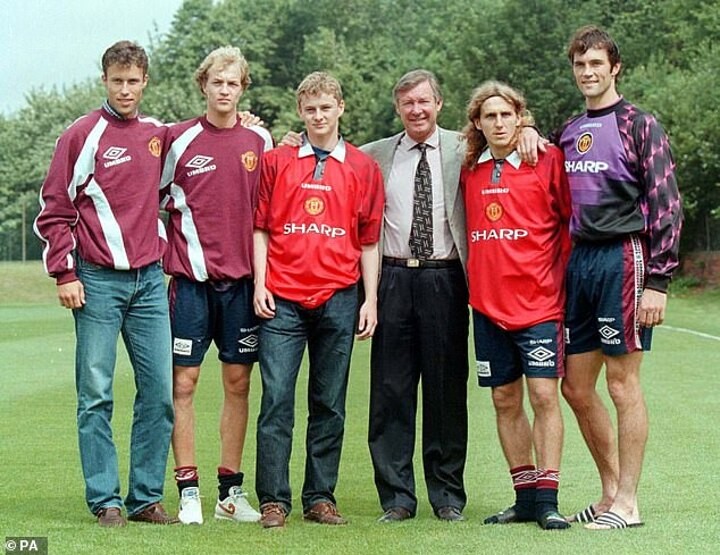 A summer's day in Manchester and Alex Ferguson squints into the sunshine and the camera lens as he poses with United's quintet of new signings.

His No 1 transfer target, Alan Shearer, had gone home to Newcastle for a world-record £15million, but Ferguson is still quietly satisfied with his bargains after a European shopping spree.

There's the long-haired Czech winger Karel Poborsky, who had scored that outrageous lob against Portugal in the quarter-final of Euro 96 a month earlier, signed for £3.5m.

There's Jordi Cruyff, son of Dutch legend Johan, picked up from Barcelona for just £1.4m, plus the Norwegian defender Ronny Johnsen, £1.2m from Besiktas, and the Dutch keeper Raimond van der Gouw, who will be back-up to Peter Schmeichel.

Then, in the middle of the picture, with Ferguson's arm draped around his shoulders, is a baby-faced boy in an over-sized shirt who looks about 13.

As Gary Neville would quip many years later, Ole Gunnar Solskjaer gave the first impression of someone who'd somehow won a competition in Norway to come and train with United.

The £1.5m striker from Molde was one of the lower key summer arrivals. It was intended he would start off in the reserves and work towards the first team - but history had other ideas.

It's 25 years this week since Solskjaer signed and the golden thread that binds him and Manchester United together shows no sign of fraying.

This club legend turned manager has just extended his contract through until 2024, taking the story into another quarter-century.

Despite his youthful looks, it would be wrong to say Solskjaer, 23 years old when he joined United, was a novice. He'd played over 150 games in Norwegian football, was a full international and had been attracting interest from leading European clubs.

Indeed, things could have been very different. His manager at Molde, Aage Hareide, had already tipped off Everton and Manchester City to Solskjaer's potential, while there was also interest from Liverpool and other heavyweights.

'Were Liverpool and Bayern Munich in for me? Yes,' Solskjaer recalled many years later. 'Cagliari, PSV Eindhoven and a couple of other teams.

'But I wouldn't change the history. There was only one choice. It was fantastic when the call came.'

Less so for Hareide, the former Manchester City defender, who thought the fax from Fergie that landed on his desk during Euro 96 was a hoax. It almost ended up in the bin.

'I thought someone was being mischievous and the fax was not all that it seemed,' he said in 1996. 'But when I inspected it closely it seemed genuine.

'We still contacted United to double check and then accepted their offer. When the public found out the place went mad because it's a record fee in Norway.'

Sat next to Ryan was Wolves manager Mark McGhee, who was actually watching Solskjaer. Ryan phoned Ferguson right away: 'I've found someone but we need to be quick.' The fax machine was soon whirring.

Called into Hareide's office to discuss the move to United, Solskjaer required little convincing. Time was of the essence, with both the Molde bosses and United chairman Martin Edwards about to go off on holiday.

With the private jet Molde typically made use of undergoing repairs, they sourced another plane to get Solskjaer over to Manchester at the earliest opportunity.

Upon his arrival, Solskjaer was whisked into a one-on-one meeting with Ferguson.

'I was nervous because you're afraid that you're going to say something daft and he's going to have a wrong first impression,' Solskjaer recalled on the UTD Podcast.

'I knew he'd not seen me play a game, so it was an important meeting for me.

'It was just me. We had fish and chips at Old Trafford, in the restaurant back there, and it was maybe half an hour or 45 minutes.

'He said: "Use the first six months in the reserves, then after Christmas maybe we can integrate you into the first-team squad."'

It was at this point that Solskjaer's fresh-faced appearance again caused confusion.

'A tour guide thought I was going on a tour,' he told FourFourTwo in 2016. 'He was talking away, then at the end he asked me: "So what are you doing here?"

'I said I was going in to sign a contract! He was speechless. But he gave me his pen and I signed the contract with that pen!'

Announcing the signing, Edwards said: 'Solskjaer is one for the future… he could prove incredible value if he comes on as well as we hope he will.'

The deal was done but that wasn't the end of the red-faced moments for Solskjaer.

On his first day of training, after Nicky Butt had been dispatched outside to greet Solskjaer at his car and show him around, it wasn't 100 per cent sure which team the new recruit should be playing in.

'I remember Ole walking into the changing room at the Cliff for the first time, in 1996, and he walks in with what I can only describe as a jumper from the 1970s in Yorkshire,' Neville said on Sky Sports' Off Script podcast last year.

'Woollen, bobbly. I genuinely thought he was a competition winner from Norway. He looked about nine and was so thin.'

Solskjaer said: 'I think they had a laugh at my expense, the boys, because I've got to be honest, I didn't look like I was a ready-made Man United player! I had youthful looks.'

The newcomer soon got his own back by repeatedly nutmegging Neville in training and his elevation into the first team wasn't far away.

Intended to be back-up for Eric Cantona and Andy Cole, things accelerated for Solskjaer when Cole suffered a broken leg and the striker needed just six minutes to score on his debut.

With United trailing Blackburn Rovers 2-1 at Old Trafford, Solskjaer was introduced for defender David May in the 64th minute and scored in the 70th, finishing on the rebound after Tim Flowers saved his first attempt.

And the goals just kept on coming. Far from toiling away in the reserves, Solskjaer was seizing every opportunity he was given in Ferguson's first team.

He ended his debut campaign at Old Trafford with 18 Premier League goals in 33 appearances, of which 25 were starts, and was the team's leading goalscorer.

Solskjaer was quickly nicknamed the 'baby-faced assassin' for his deadly finishing but the 'supersub' tag was acquired a little later.

The rest is history, of course. Solskjaer's heroics in the 1999 Champions League final, securing the Treble for United, ensured eternal hero status.

He ended up with 126 goals in 366 games for the club, winning six Premier League titles, before returning as their manager in December 2018.

With United now spending big in the summer market to try and rediscover that culture of winning silverware, the hope is Solskjaer can oversee a dynasty of success to rival Ferguson's.

Not too bad at all for a 'competition winner from Norway'.