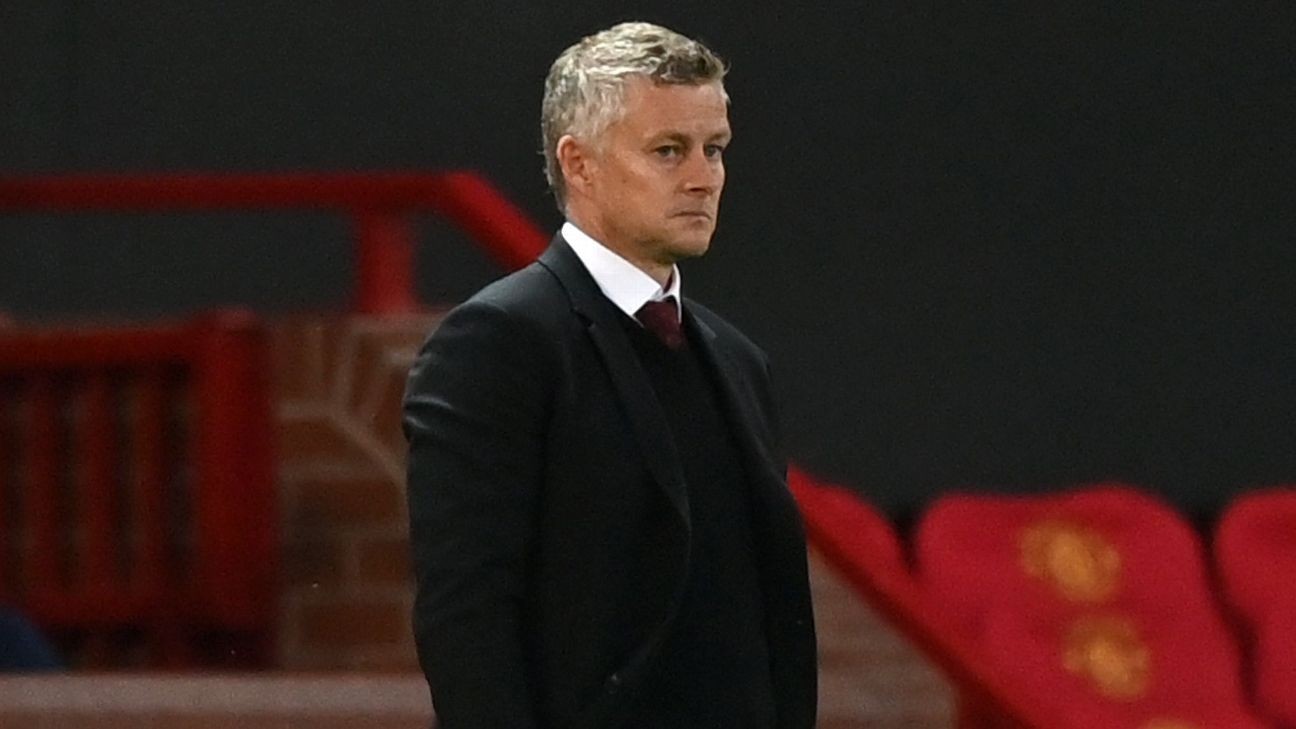 MANCHESTER, England -- If there was any optimism left at Old Trafford, it disappeared over the course of 90 frightful minutes against Crystal Palace. Manchester United lost 3-1 to a team who finished 14th last season, but it could have been worse. It was still United's worst opening day defeat for 25 years.

A debut goal for Donny van de Beek, which briefly gave Ole Gunnar Solskjaer's team hope of salvaging something, was the highlight but there were few other positives to take from a wretched evening. Palace turned 24% of the possession into 14 shots and five on target, while at the other end Vicente Guaita had very little to do.

It didn't help that while United were struggling to get out of first gear, Tottenham Hotspur were unveiling Gareth Bale and Borussia Dortmund were taking apart Borussia Monchengladbach thanks to Jadon Sancho. Solskjaer used his programme notes to tell supporters this season is about "continuing the progress" achieved last term, but there is already a growing frustration among fans, who have watched Liverpool sign Thiago, Bale return to Tottenham and Chelsea splash out more than £200 million.

With two weeks to go before the transfer deadline, United still need a right-sided forward and, judging by Victor Lindelof's performance against Palace, another centre-back. They also look in desperate need of some inspiration.

"You can see we are short and they deserved the points," Solskjaer said. "They were sharper than us in challenges and tackles. We started slowly and that had a knock-on effect for the rest of the game when they scored the first goal.

"I am very, very disappointed but sometimes you can't be too surprised when we are not at our best yet because this is the first game. We have played until the middle of August last season and they have had a very, very short and strange preseason. I was hoping for better today but it wasn't to be. We need to improve and quickly."

It took just seven minutes for Palace to puncture United's hopes of getting the new season off to a winning start.

David De Gea had already arrowed a pass straight to James McCarthy and got away with it but United weren't so lucky when Jeffrey Schlupp was sent racing away down the left. Lindelof could get nowhere near the left winger, who crossed for Andros Townsend to score at the far post.

Like Lindelof, Luke Shaw should have done better -- perhaps an indicator as to why the club are interested in 27-year-old Brazilian left-back Alex Telles. Talks have started but nothing has yet been agreed with Porto.

Solskjaer's half-time team talk would have been made even harder if De Gea hadn't done well to get his arm up to block Jordan Ayew's shot after he had turned inside Scott McTominay.

While Manchester United need reinforcements in the market, Ole Gunnar Solskjaer must get more from the players at his disposal. Getty

The manager's response at the break was to make a change on the right, bringing on Mason Greenwood for Daniel James. Unfortunately for Solskjaer, his favourite right winger is still playing in Germany.

The one summer signing United have managed to get over the line, Donny van de Beek, came on in the 67th minute, replacing Paul Pogba. But by the time the £40m Dutchman had any chance to make an impact, it had got even worse for United.

First, Lindelof was adjudged to have handled Ayew's toe poke at goal after VAR Jon Moss advised referee Martin Atkinson to consult the pitch-side monitor. United looked to have escaped when De Gea saved Ayew's spot kick but after Moss decided the Spain No. 1 had left his line early, Wilfried Zaha took responsibility for the retake and rifled the ball into the top corner.

Van de Beek got his goal on 80 minutes when Timothy Fosu-Mensah's cross rebounded off Joel Ward, but any hopes of forcing an equaliser ended five minutes later when Zaha capitalised on another Lindelof mistake to make it 3-1. It's little wonder that Solskjaer was caught by the television cameras in July telling Ake he needs another centre-back.

He needs more than that before the transfer window closes on Oct. 5 if he hopes to avoid another season-long scrap to get into the top four. It was supposed to be the season when United began to close the gap with Liverpool and Manchester City.

New arrivals will help give the club a lift but Solskjaer's first job is to get more out of the players he does have before the trip to Brighton next weekend.

"If you look at the players we have on the pitch and on the bench and not here we have to look within first and we know we can perform better," said Solskjaer. "We are always looking to improve if there is something available at the right place but we can all look ourselves in the mirror.

"We should look within. We can perform better than this. It was an off day, everyone knows they can improve and we will improve."