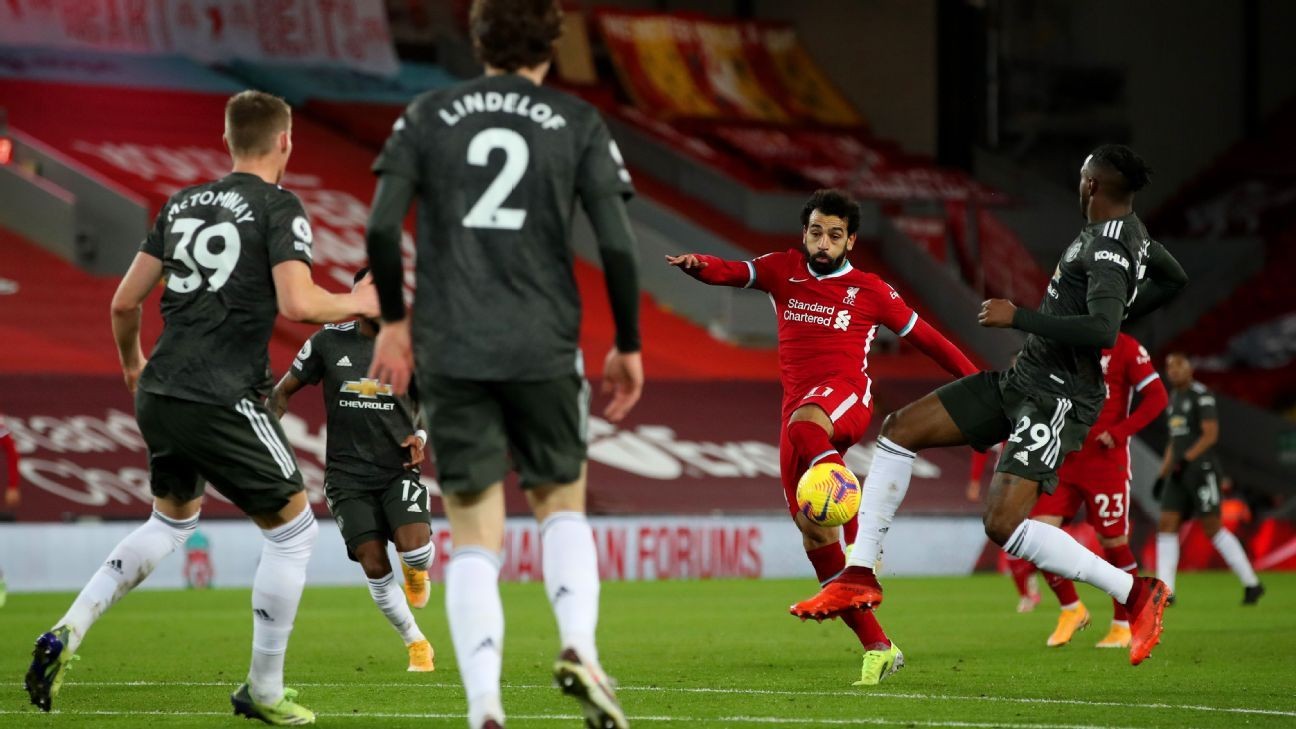 LIVERPOOL, England -- Manchester United really are Premier League title contenders again, and Sunday's 0-0 draw against Liverpool at Anfield proved it once and for all.

It was hard to watch at times, with two old rivals showing too much respect to the other to cut loose and really go for the win. At times United also rode their luck, particularly in a one-sided first-half that was dominated by Liverpool. But the measure of United's performance (and the result) was that when the final whistle went, there were no fist-clenching celebrations or high-fives to mark a point at Anfield. Instead, there was a sense of disappointment that they didn't convert at least one of their second-half chances to win the game and end Liverpool's four-and-a-half year unbeaten home run in the league, which now stands at 68 games.

"We are coming away with a point and the lads are disappointed," United manager Ole Gunnar Solskjaer said. "It was an opportunity missed with the chances we had, but we were playing a very good side. I'm disappointed, but a point is OK if you win the next game.

"We have improved and progressed, but we know we can do better."

United turned up with a plan and the self-belief earned over a 15-game unbeaten streak away from home in the league - a run that stretches back to last January's defeat here - and headed back onto the team bus with a clean sheet and top spot still in their possession.

The temptation in modern-day football, perhaps as a side-effect of the demands on social media for everything to be bigger, better or faster than everything that has gone before, is to only gauge progress by how exciting and eye-catching a team may be. United were rarely eye-catching or exciting on Sunday, but there were solid and organised and, by the end of it, the team running out ideas and belief were Liverpool, who failed to score for the third successive league game.

By full-time, United looked most likely to emerge as winners and, but for two crucial late saves by Alisson Becker to deny Bruno Fernandes and Paul Pogba, Liverpool's long unbeaten home run would have come to an end and United would now be six points clear of the faltering champions.

While United are on the upswing again, Liverpool are falling back towards the pack, which was inevitable in many ways after their record-breaking title success last season.

Salah, in red, and Liverpool were frustrated by Man United on Sunday and will rue not getting all three points to dent their rivals' growing confidence atop the table. Paul Greenwood - CameraSport via Getty Images

When United walked off the Anfield pitch following a 2-0 defeat 12 months ago, they were 30 points behind Liverpool and seemingly a million miles from even contemplating a fight for the title. A year on, United are leading the way.

This fixture is always a symbolic measuring stick for the two clubs. When Mohamed Salah scored Liverpool's second in that 2-0 win last year, it marked the moment when everyone at the club began to believe that the title was theirs -- Anfield erupted as soon as Salah's shot hit the net, and they never looked back. On Sunday, there was no such defining moment, but United will have left with their own sense of having crossed the Rubicon by playing Liverpool at Anfield and emerging unscathed, hammering out a message to Jurgen Klopp's team that they can once again look them in the eye as equals.

In last season's fixture here, United were in the midst of a slump that had left Solskjaer fearing for his job and they played at Anfield in panic mode. But there was a swagger about United this time, even if they were forced to withstand heavy Liverpool pressure for long periods of the first half. There was no panic despite being overwhelmed by a wave of shots and Liverpool possession -- instead, just an air of trust in the counter-attacking game-plan that left Klopp's side frustrated long before the final whistle.

It's the way United play right now and it has made them competitive again, but to take the next step, they will soon have to find a way to take greater control in midfield and also be more clinical when they have goalscoring chances.

Pogba was once again impressive for United - Harry Maguire was also outstanding at the back - and the pace and movement up front was a constant worry for Liverpool, despite Marcus Rashford's continuing inability to hold his runs and avoid the offside trap. That is one of a number of tweaks that Solskjkaer and his coaches need to address, but in comparison to a year ago, they are minor details that can be fixed fairly easily.

Klopp also has tweaks and corrections to take care of with his team, but the solutions are less easy to find because of injuries and the reality that, after almost three years of incremental improvements, progress has perhaps hit a ceiling. Burnley are next up, with Sean Dyche's team due at Anfield on Thursday, before two tough away games at Tottenham and West Ham. Liverpool are a team that could easily win all three games and banish the growing gloom, but on current form, they could also drop points in each of them.

For Klopp, though, the story would have been different had the result gone Liverpool's way against United.

"If we won 1-0, I'd think it was completely fine," he said. "You can't deny Manchester United chances for 90 minutes. You never could. They're in a good moment.

"With all the things said before the game -- they're flying and we're struggling -- my boys played a good game tonight. But we didn't score. That's the most important thing in football."

United didn't score either, but their 0-0 was a sign of progress rather than malaise, and the confidence they get from it will only help sustain their title ambitions.