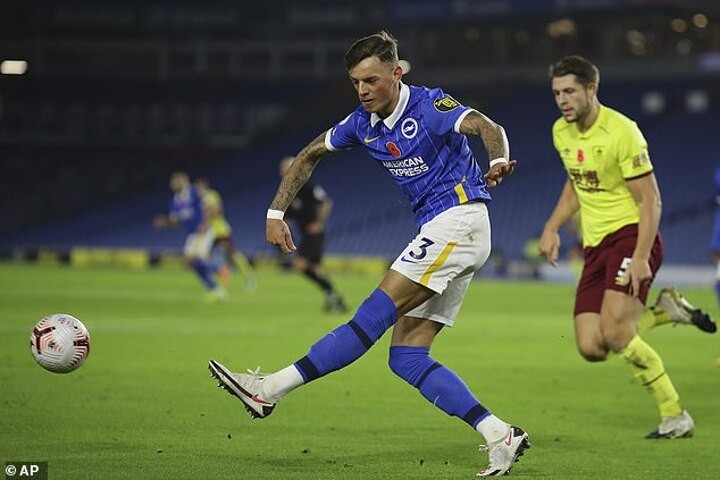 Manchester United are among a host of Premier League clubs monitoring the progress of highly-rated Brighton centre back Ben White.

The 23-year-old has started all 10 Premier League games for the Seagulls this season, forming a solid defensive partnership in a back-three with Lewis Dunk and Adam Webster on the south coast.

United, who have a host of defenders on their books, are interested in White though as are rivals Chelsea and Tottenham according to Sky Sports, despite both clubs also having a number of centre backs in their first-team squads.

The report details that White is the Premier League's fourth-best performing centre back, behind Kurt Zouma and Thiago Silva of Chelsea and Arsenal's Gabriel, according to digital scouting service Wyscout.

White spent last season on loan at Leeds United and played in every single Championship game as he helped Marco Bielsa's side gain promotion to the top-flight.

Leeds tried to sign the centre back permanently in the summer as a result of his reliability last season, but a bid in the region of £25m was rejected and he signed a new four-year deal at the Amex Stadium.

Prior to his season at Elland Road, White spent time on loan at Newport County in League Two, and Peterborough United in League One, working his way up the EFL ladder before solidifying a place in the Brighton starting XI.

Ole Gunnar Solskjaer's United were reportedly looking at centre backs in the summer, but are still well stocked in the position with players such as Harry Maguire, Victor Lindelof, Eric Bailly, Axel Tuanzebe, Phil Jones and Marcos Rojo.

Similarly, Chelsea have strength in depth after acquiring Silva on a free transfer from PSG but nevertheless are keeping an eye on White's progress.

Tottenham bought Joe Rodon from Swansea in the final week of the transfer window, and he made his full debut at the weekend in the goalless draw against Chelsea.

Yet with Toby Alderweireld struggling with an injury, Jose Mourinho is continuing to monitor defensive options with less than a month until the January transfer window opens.