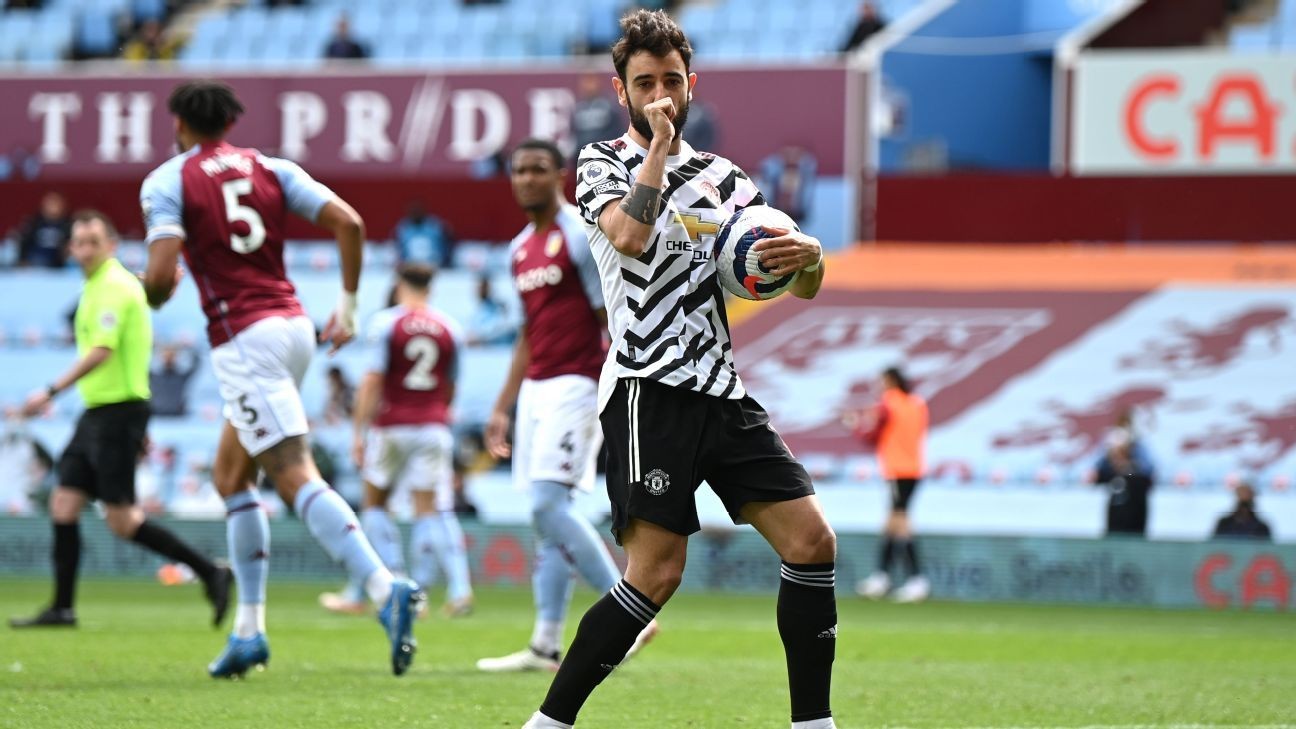 Bertrand Traore put Villa ahead on 24 minutes with a fine opener before Bruno Fernandes equalised just after the break from the penalty spot. Mason Greenwood slammed home soon after to put United ahead before substitute Edinson Cavani made the game safe on 88 minutes. Ollie Watkins then saw red for the home side after picking up a second booking for diving in the penalty area.

"We have been in this situation a lot of times, we have the quality, are a fit team and we always believe. When we got the first goal I felt we were going to win," United defender Luke Shaw told Sky Sports after the match.

"We are just focusing on ourselves, even more so we look at the City result and we are disappointed with the points we have let go this season. We have two games in four days, we need to be ready."

The match at Villa Park marked the start of a difficult spell for Ole Gunnar Solskjaer's side, who face Leicester in the league on Tuesday before the re-arranged match with Liverpool two days later after last Sunday's game was called off due to fan protests over the club's ownership.

Solskjaer, whose side reached the Europa League final on Thursday with an 8-5 aggregate win over Roma, criticised the fixture schedulers in the lead up to Sunday's match against Villa but his side started well, with Shaw, Paul Pogba and Fred having shots at goal.

Manchester United came from behind to ensure Manchester City did not win the title on Sunday. Shaun Botterill/Getty Images

It was Villa who took the lead, though, when Victor Lindelof was too weak to clear his lines and Traore stole the ball and unleashed a superb effort past Dean Henderson.

Fernandes' 27th goal of the season, 17 of them in the league, arrived in the 52nd minute from the penalty spot after Pogba was fouled in the area. The goal, Fernandes' third penalty in three appearances against Villa, continued his fine record of scoring 21 spot kicks from 22 attempts.

The goal sparked United into life and four minutes later, they were ahead. Greenwood rolled Tyrone Mings and unleashed a fierce low drive that beat Emiliano Martinez. Greenwood's strike, in his 101st match for the club, took him past Wayne Rooney as United's leading Premier League scorer as a teenager with 16.

Villa responded and Traore headed towards goal amid pressure from Harry Maguire, but Henderson did well to turn the ball behind. Greenwood and United then escaped when the ball appeared to hit his arm in the penalty area, but VAR ruled in the visitors' favour.

Marcus Rashford then floated in a cross and Cavani headed into make sure of the win, before Villa's afternoon got worse when Watkins saw red.

Guardiola's side are 10 points clear of United and could win the title if Solskjaer's side slip up against Leicester on Tuesday.