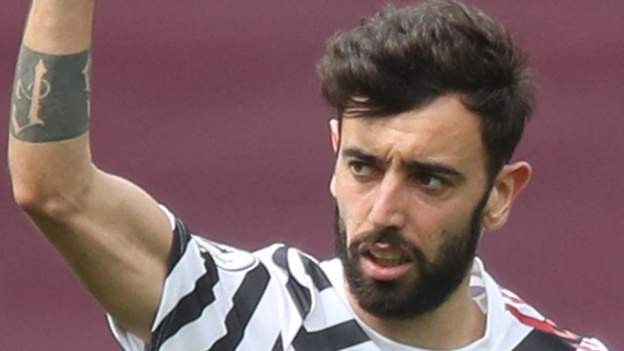 Bruno Fernandes has scored 27 goals for Manchester United in all competitions this season, the most by a Premier League midfielder in a season since Frank Lampard for Chelsea in 2009-10

Manchester United virtually guaranteed a Premier League top-four finish and ensured rivals Manchester City must wait to be crowned champions as they came from behind to beat Aston Villa at Villa Park.

Having sealed their place in the Europa League final despite a 3-2 second-leg defeat by Roma on Thursday, second-half goals from Bruno Fernandes, Mason Greenwood and substitute Edinson Cavani ensured Ole Gunnar Solskjaer's side require a single point from their remaining four games to secure a Champions League place.

A win for Villa would have sealed the title for leaders City - beaten 2-1 by Chelsea on Saturday - and Bertrand Traore's emphatic finish into the top corner midway through the first half threatened to do just that.

Emiliano Martinez was equal to attempts from Greenwood and Marcus Rashford as United struggled to respond initially, while Dean Henderson kept out Ollie Watkins' strike to deny Villa a second before half-time.

United levelled shortly after the restart when Fernandes calmly slotted in a penalty after Douglas Luiz needlessly fouled Paul Pogba, and Greenwood completed a four-minute turnaround when his low strike found the bottom corner.

A VAR check for handball against Greenwood was dismissed after Luiz headed the ball onto the arm of the United forward and the visitors successfully resisted late Villa pressure despite the loss of captain Harry Maguire to injury, before Cavani confirmed victory in the closing stages.

In a frantic finale, Villa forward Watkins also received a red card for a second booking for simulation when under pressure from goalkeeper Henderson.

United are 10 points behind champions-elect City but will have the chance to move within four points as they face Leicester and Liverpool before the leaders next play.

With an exhausting short-term schedule to navigate, Solskjaer made four changes from United's midweek trip to Rome for his side's second fixture in a run of four in eight days - a situation created after last weekend's league meeting with Liverpool was postponed due to fan protests.

Henderson, Marcus Rashford, Scott McTominay and Victor Lindelof started at Villa Park, and while Lindelof should have offered greater resistance for Traore's opener, there was little Henderson could do to keep out his fine strike.

It was the 10th time this season United had conceded the opening goal in an away Premier League game - indeed Solskjaer's side have gone 1-0 down on more occasions (14) than they have gone ahead (13) in the competition this season - but impressively they remain unbeaten when doing so away from home after this latest fightback.

But they were rewarded for a much-improved second-half display, with Fernandes' spot-kick setting the tone for a side totally unfazed by falling behind.

Greenwood made his latest claim to be included in Gareth Southgate's European Championship plans with his fifth goal in five Premier League games, though Maguire's early departure following a collision with Anwar El Ghazi will be a concern for both the England boss and Solskjaer.

But Cavani's accurate header from Rashford's cross ultimately capped a positive week for United, in which they reached a first final of the Solskjaer era and co-chairman Joel Glazer announced plans for his first meaningful discussions with fans since his family bought the club in 2005.

Victory over an Everton side seeking to keep their European hopes alive last week was further evidence of how far Dean Smith's side have progressed this season, even if results since the turn of the year have dipped.

Last term, a 3-0 home defeat by Manchester United with four games to go left Villa second-bottom and four points from safety, before they rallied to survive by a single point.

Traore's lack of defensive support for right-back Matty Cash appeared an early concern as Luke Shaw found joy out wide, but he demonstrated his quality in the opposite half as he spun past Lindelof before unleashing a powerful drive into the far corner.

But once Luiz's trip on Pogba allowed United a foothold, Villa faced an uphill task as the visitors made it 22 Premier League visits to Villa Park without defeat.

Villa remain 11th and have a top-half finish to aim for in their remaining four matches of a much-improved second season back in the top-flight.

'We showed character, resilience and belief' - what the managers said

Manchester United boss Ole Gunnar Solskjaer to BBC Sport: "A great result and it takes a little bit of pressure away from having to get results because the next two [versus Leicester and Liverpool] are against very good teams."

On coming from behind again to win: "It shows character, resilience, belief, fitness. It is difficult at times, especially when you travel back and don't get home until 5am Friday and then travel here. It is a long season and I am delighted for everyone."

Aston Villa boss Dean Smith to BBC Sport: "I didn't think we started the game particularly well. We upped it and then I thought we were good first half, we high pressed well and got a good goal. We were quite comfortable at 1-0 at half-time. I think the game turns on the penalty decision.

"There was a touch but was it enough to go down? I watched Man City last night and Sterling had four touches in his back and doesn't get a penalty and today it is a penalty. This is with Stockley Park watching in slow motion so you tell me what is happening because I don't think the football world actually understands it anymore."

Ollie Watkins (Aston Villa) has gone down, but the referee deems it simulation.

Goal! Aston Villa 1, Manchester United 3. Edinson Cavani (Manchester United) header from the centre of the box to the bottom left corner. Assisted by Marcus Rashford with a cross.

Bertrand Traoré (Aston Villa) wins a free kick in the defensive half.

Attempt saved. Bertrand Traoré (Aston Villa) header from the right side of the box is saved in the centre of the goal. Assisted by John McGinn.

John McGinn (Aston Villa) is shown the yellow card for a bad foul.