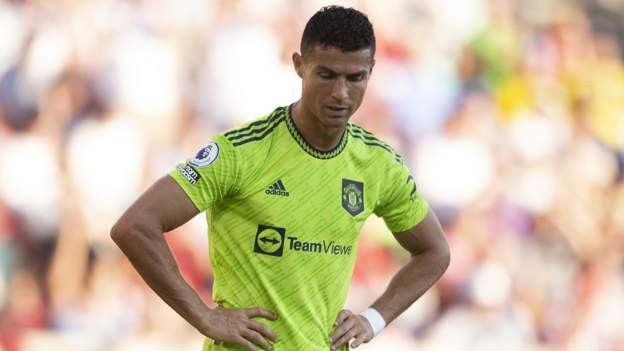 Manchester United could let Cristiano Ronaldo leave Old Trafford during the current transfer window amid concerns about how the striker's mood is affecting morale in the camp.

Manager Erik ten Hag's public stance has been that Ronaldo, 37, is not for sale and is part of his plans.

However, senior figures have been alarmed at how quickly the overwhelmingly positive feelings around the camp generated during a successful pre-season tour to Thailand and Australia have disappeared.

The Portuguese has a year left on the contract he signed when he returned to the club from Juventus less than 12 months ago. but wants United to let him leave this summer.

While successive Premier League defeats to Brighton and Brentford have clearly shaken United badly, part of the overall picture has been put down to Ronaldo.

The Portuguese is said to be a negative presence at the club, hardly communicates with his team-mates in the canteen and has made no secret of his desire to move away.

Sources have told BBC Sport they fear there will be no change to United's current issues until Ronaldo has gone and there is a belief amongst some that even if the forward left and there was no replacement, the general uplift would trigger a significant improvement in overall performances.

It is this issue Ten Hag, chief executive Richard Arnold and football director John Murtough are wrestling with before the transfer window closing on 1 September.

Winless United are bottom of the Premier League and play Liverpool on Monday 22 August.

Speaking on Sky Sports on Monday, former United defender Gary Neville said: "There is a massive decision to make on Ronaldo. He is obviously not happy, the problem is if they lose him there is nothing left in the goalscoring part of the pitch. I genuinely think if he leaves and they don't bring people in they could finish bottom half of the table."

Five-time Ballon d'Or winner Ronaldo was United's top scorer last season - and third in the Premier League - but the club finished sixth and missed out on Champions League qualification.

Chelsea ended their interest in the player last month, while he has also been linked with Bayern Munich and Atletico Madrid.

Atletico fans have urged their club not to get involved in discussions around signing Ronaldo.