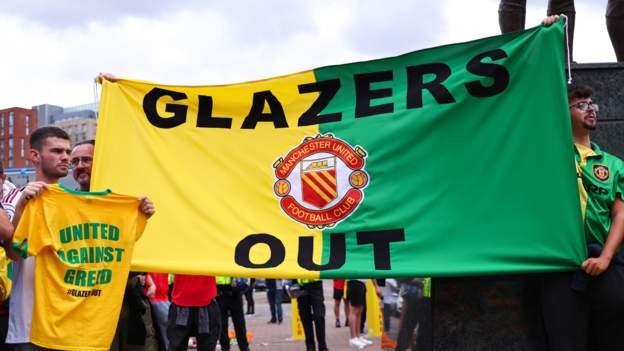 Manchester United fans will have a "spring in their step" at the news the Glazer family is considering selling, says the club's supporters' trust.

The American owners announced on Tuesday they were looking to "explore strategic alternatives".

"It very much looks like they have hung up the 'for sale' sign around the decaying gates of Old Trafford.

"Every Manchester United fan has woken up with a bit more of a spring in their step this morning."

The club's announcement said the board would "consider all strategic alternatives, including new investment into the club, a sale, or other transactions involving the company".

It added the process "will include an assessment of several initiatives to strengthen the club".

Rumfitt said Must would be seeking an immediate clarification of the Glazer family's intentions.

Speaking to BBC Radio 4's Today programme, he added: "If that [selling the club] is not their intention, they need to clear that up pretty quickly and they haven't done so."

Must later released a statement saying the club needed "new investment more than ever".

It said United fans had become "dismayed with the ownership of the club" amid a "decline on the playing side and a decline in our stadium".

"Any prospective new owner or investor has to be committed to the culture, ethos and best traditions of the club," it said.

"They have to be willing to invest to restore United to former glories, and that investment must be real new money spent on the playing side and the stadium."

Must also said any new ownership structure "must embed supporters, including a degree of fan share ownership, in their operating model".

It added: "Manchester United's fans are its greatest asset and hold the key to unlocking the true value of any football club. That relationship has to be one of equals - sharing in ownership and unified with the same goals."

In 2012, the Glazers sold 10% of their holding via a stock listing and have sold further shares in the subsequent years.

British billionaire Sir Jim Ratcliffe, 70, said in August he would be interested in buying United following a Bloomberg reportexternal-link that the Glazer family were willing to sell a minority stake but then later stated the owners had told him they did not want to sell.

Who is Sir Jim Ratcliffe?

Economist Lord O'Neill led an attempt to buy the club by a group known as the Red Knights in 2010.

He did not rule out another bid when speaking to BBC Radio 4's Today programme.

"Whoever owns Manchester United needs to understand what it is they're taking on," he added.

Rumfitt said Must members would "judge any prospective owner on their merits".

He added: "Many fans would probably have a preference for a British owner but we are realistic. We look at the world around us and who is buying football clubs and in the large majority of cases they are not British.

"It is about dialogue with the fans, shared ownership with the fans and investment in the club. Wherever they come from, that matters less to us than their willingness to commit to those three priorities."

The 13-time Premier League winners have not won the title since 2013 and have not won a trophy since claiming the Europa League and EFL Cup in 2017.

There have been multiple protests against the Glazers' ownership in recent years, including one in May 2021 that caused United's home league match against Liverpool to be postponed.

Thousands of supporters marched to Old Trafford in protest in August before the same fixture this season.

United were part of the failed European Super League project that rapidly collapsed in April 2021. United co-chairman Joel Glazer later apologised for the unrest it caused.

He has since attended fans' forums in the wake of supporter unrest and pledged to make shares available to the club's followers.

Portugal captain Cristiano Ronaldo, who left Manchester United with immediate effect on Tuesday, criticised the club ownership in an interview last week - including saying the Glazer family "don't care about the club" on the sporting side.