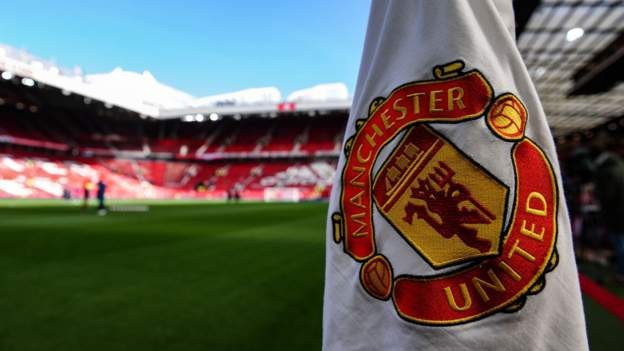 The Glazer family has owned Manchester United since 2005

More than 50 Manchester United supporters groups have listed their demands of potential buyers of the club - including a commitment to not joining the European Super League and continued development of the women's team.

The Glazer family, who bought United in 2005, revealed in November they were exploring "strategic alternatives" for the club - one of which was selling it.

In an open letter, fan groups said they want any new owner to "nurture and invest" in the club, and recognise it as "more than just a commercial asset".

The demands of any potential bidders include:

A commitment to clearing the club's existing debt and funding future capital expenditure through new share issuesInvestment in the men's, women's and youth teams as well as investment into the club's infrastructure to modernise Old Trafford and the training groundShared ownership with the fans as partners, plus fan representation on the main company boardThe words 'Football Club' being restored to the club's badge on the shirtContinued development, support and promotion of the women's teamCommitment to never again seeking to enter a competition like the European Super League without the definitive consent of fansMaintaining the affordability of match tickets for fans

The open letter has been co-signed by official United supporters groups such as the Manchester United Supporters Trust (MUST) and the MUFC Women's Supporters Club, as well as branches around the UK and abroad.

It said it would be "helpful" for potential bidders to "understand what supporters want from any new owner, in order to secure the support of the fans".

BBC Sport understands if the Glazers sell - which is not certain - a deal is likely to be done by the spring.

The Glazers purchased United in a controversial £790m leveraged buyout in May 2005.

The club has since spent more than £1bn on interest and loan payments, plus share dividends - the majority of which have gone to the American family.

Widespread supporter protests accompanied the sale and have returned in recent seasons, particularly since the failed attempt to launch the European Super League.