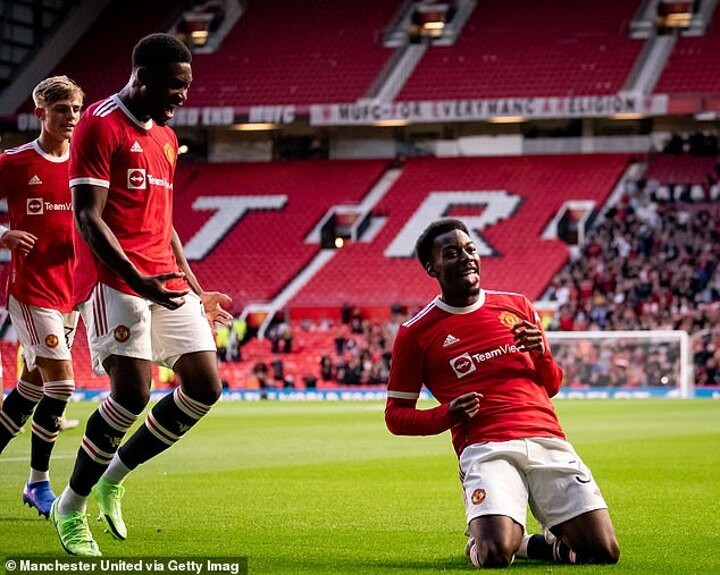 Aaron Wan-Bissaka's cross was a fraction behind him but the body adjustment was sharp and the volleyed finish perfectly executed.

A split-second later, 30,000 Manchester United fans inside Old Trafford were showing their appreciation for Anthony Elanga.

'When it went in I could hear the roar from the fans - it's my first time playing at Old Trafford with the fans - and it felt special,' Elanga said afterwards.

When it comes to convincing Ole Gunnar Solskjaer not to send him out on loan this season but keep him at United as an ace up the sleeve, Elanga is doing a fine job.

After goals against Queens Park Rangers and now Brentford in pre-season friendlies, adding to the one scored at Wolves on the final day of the Premier League last season, the 19-year-old is hammering on the first-team door.

The talent of the Sweden Under-21 international, who can play on either wing or as a centre forward, isn't in doubt. The question is whether a path to Solskjaer's first team is currently open.

If Marcus Rashford misses the first two months of the season to have shoulder surgery, Elanga could well get his chance. This exciting winger would offer stiff competition for Dan James on the left side of United's attack.

He was certainly more eye-catching than James, who replaced him on 62 minutes, in Wednesday night's 2-2 draw with Brentford, a game littered with stunning goals.

Elanga, who joined United from Swedish club Malmo in 2014, played alongside Mason Greenwood in the under-14 side. Now he has aspirations to soon line up alongside him in the first-team attack.

Solskjaer certainly seemed impressed as he mulled Elanga's next step.

'The boy is electric, has energy and enthusiasm, he's really enjoying himself,' the United boss said.

'He's done himself the world of good. We know he's a good player, we know he's a good lad. He works so hard, he's always smiley, bright, asking what more he needs to do, he's so hungry to improve and get better.

'He can play wide left, wide right, up front… so anywhere along the front line. He's going to be an asset.'

Keen to emphasise Elanga's eagerness to please, Solskjaer added: 'If you ask him at half-time to run over to the cricket ground and get us a drink, he'd do it. That's the type of lad he is.'

Elanga, who won the prestigious Jimmy Murphy Young Player of the Year award in 2020, following in the footsteps of Rashford and Greenwood, clearly senses it could be his moment.

Earlier this month, he posted a slick Instagram video showing himself in training. It was captioned: 'Don't complain about the season you didn't have with the work you didn't do!'

It focused on Elanga firing in shots from the edge of the penalty box - he has been criticised for not taking some of the simpler chances that fall his way - and lifting weights in the gym to cope with the physicality of senior football.

Another big compliment came from Old Trafford legend Gary Neville, who described Elanga as 'a nightmare to play against' and 'Thierry Henry-esque' when he scored one and set up another for United's under-21 side in a 6-0 rout of Salford City in the EFL Trophy last season.

That comparison will have pleased Elanga, who idolised Henry growing up.

'I tried to match my game with his. He was quick, he could play anywhere across the front three - striker, left wing, right wing - and that's how I want to replicate my game,' he told The Athletic last October.

It helps Elanga that football runs in his blood. His father was Joseph Elanga, a defender who played for Malmo and Brondby among others and made 17 appearances for Cameroon, making their 1998 World Cup squad. Samuel Eto'o, unsurprisingly, was another role model.

He played in Malmo's youth teams as a schoolboy before moving to England with his mum Daniella, who took the then 11-year-old to a training session at Hyde United on a cold January night.

Elanga was left looking lost, however, because Hyde didn't turn up but he was invited to train on the neighbouring pitch with Hattersley FC.

17 goals in 12 matches later and Elanga was drawing interest first from Man City and then from United.

Elanga still keeps in touch with Hattersley and earlier this year paid an £80 astroturf hire fee to make sure one of their games wasn't postponed.

Assimilating into the Old Trafford dressing room hasn't been an issue. Elanga speaks fluent English, Swedish and French with intentions to learn Spanish and Portuguese.

After impressing in United's youth sides, Elanga was promoted into the first-team fold at the start of last season, making his debut in a pre-season friendly against Aston Villa.

From there, he was called into the United squad for various Europa League games before finally making his competitive debut against Leicester City on May 11.

His chance came because United had to play Liverpool two nights later, forcing Solskjaer to rotate.

A thumping header at Molineux on the final afternoon of the season was the perfect way to sign off and Elanga has picked up his form ahead of the new campaign.

'He's got an X-factor,' Solskjaer has said. 'He's got the acceleration, pace, speed, that's a given for wingers and he's got qualities I like.'

It now remains to be seen whether he likes those qualities enough to keep Elanga in his squad for the coming season.

United's Premier League opener against Leeds is just over a fortnight away and Elanga is making a persuasive argument.