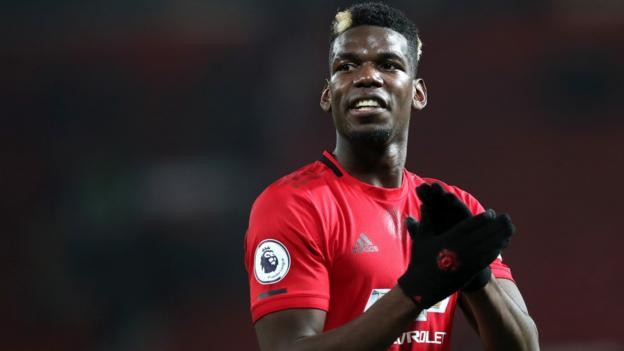 Pogba's season has been wrecked by two ankle injuries that have restricted him to eight games for United.

The 26-year-old has played only twice since September and is still only at the treadmill phase of his comeback.

"Paul knows he has to work hard to get back to his best," said Solskjaer. "He has been out now for so long now, it's a challenge to get back into shape."

Pogba's controversial agent Mino Raiola says he has spoken to Juventus about the midfielder returning to Turin in the summer, four years after his departure for United in a then-record £89m deal.

Asked whether he could state "categorically" that Pogba will play for United again, Solskjaer avoided giving a straight answer.

"Well of course, I'd like to say that as soon as he gets fit, he'll be good enough to play for the team. I'm sure Paul's desperate to play for us again," said the Norwegian.

Unlike Scott McTominay and Axel Tuanzebe, who, like Pogba, are recovering from injury and not fit enough to be involved in Monday night's Premier League encounter with Chelsea at Stamford Bridge, the France international was not part of the United group that spent the winter break at a training camp in Marbella.

Solskjaer confirmed Pogba was given permission to "do his recovery somewhere else".

"I don't have to justify every decision," he said. "Paul is still on his recovery programme. He's taken off his cast and started running on the treadmill now, so he's getting closer. It's been a long haul. Hopefully we'll see him back soon."

New arrival Odion Ighalo is likely to make his United debut as a substitute at Stamford Bridge.

The 30-year-old will be fulfilling a lifelong ambition, having grown up in Nigeria as a United supporter.

Ighalo has joined United on loan from Chinese Super League club Shanghai Shenhua until the end of the season but Solskjaer is not ruling out a permanent transfer.

"When you are in the door, it gives you a chance," he said. "If you impress as a player and a person and help the group improve, of course there's a chance we'll look at extending things and signing.

"His incentive is to play as well as he can, then it's up to us to make sure he wants to stay, if we want him."