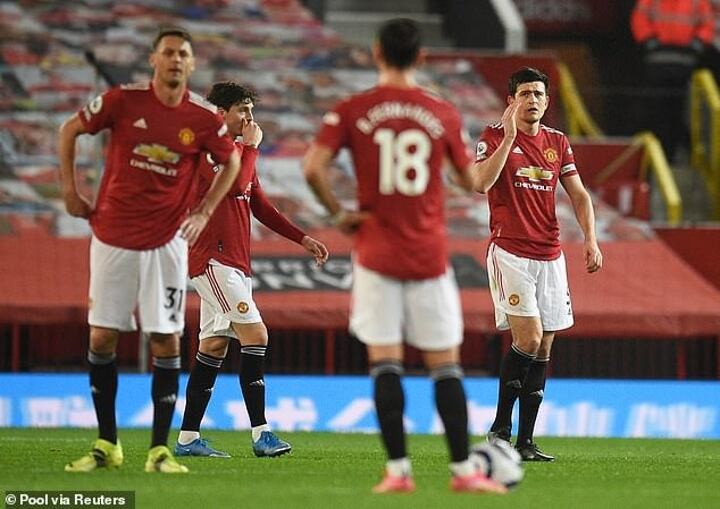 Ole Gunnar Solskjaer said we shouldn't talk about the title race until March, so here we are. And what is there to say? It's all over. Done. Manchester City will be crowned Premier League champions whatever happens in Sunday's derby.

From being top of the table towards the end of January, Manchester United find themselves 14 points behind City eight games later. What promised to be a thrilling race to the finish is now little more than a procession.

In the months — possibly years — to come, United may well look back on this season and wish they had given it more of a go.

Will City be any weaker next time? Liverpool surely won't be. And what about Chelsea, Tottenham and Arsenal?

A one-off, weird 2020-21 season might prove to be United's best opportunity to win the title for some time.

Solskjaer said last month that his team shouldn't have even been considered contenders. Whether you accept that or not, the fact is they were in contention.

Since then, they have been playing like a team who didn't think of themselves as contenders. One looking down rather than up.

Progress and improvement have been the watchwords under Solskjaer. Beating last season's third place was the primary target and it didn't feel like that changed even when his team were top.

On Friday, the Norwegian cut a philosophical figure — reluctant to be bombastic before a battle he knows has already been lost to City.

'They're ahead of us by a fair distance at the moment so this is a chance to test ourselves against a very good team,' said Solskjaer. 'Our focus is on this one game and not where we're going to end up.

'I've always said let's get to March or April before we talk about the title race. We've given ourselves a very good chance to improve on last season. They're the only team ahead of us. We want to try to claw back points and get closer to them.

'They are going through a fantastic spell — 21 wins in all competitions and we've had 21 away games in the league unbeaten. So one record is going to be broken, let's see which.'

Questions have been asked about United's results against the Big Six — five soporific goalless draws and a 1-0 defeat by Arsenal since they were hammered 6-1 by Tottenham in October.

Match of the Day pundit Alan Shearer claimed after last weekend's stalemate at Chelsea that United were 'scarred' by the Spurs defeat and that explains why they have not been more ambitious against their main rivals.

They could not take advantage of Liverpool at Anfield in January following an equally flat draw against City at Old Trafford a month earlier.

Solskjaer says United are evolving from a counter-attacking team into one learning to face the top clubs on more even terms. 'Of course, we've looked at it,' he said. 'In a strange sort of way, we've been more positive. We have been going high press in every game, on the front foot and trying to pin teams back.

'Last year maybe we relied more on the counter-attacks, dropped deep and hung on which, as a coach, is the worst feeling. We've tried to go more positive but haven't been clinical enough. It's another challenge for us and another chance to put that right.'

It's just a shame for United they didn't seize the opportunity earlier.

Meanwhile, United will have to pay Sporting Lisbon another £4.2million if bookies' favourite Bruno Fernandes is named Player of the Year.