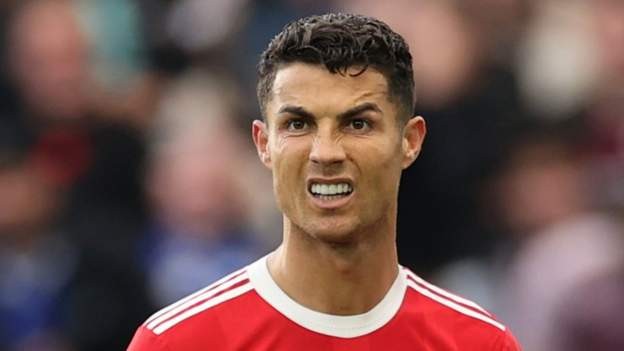 Manchester United forward Cristiano Ronaldo believes the Old Trafford side need time to adapt after an inconsistent start to the season.

United are sixth in the Premier League and five points off leaders Chelsea after collecting just one point from their last three top-flight games.

They host rivals Liverpool on Sunday, with their rivals second on 18 points.

"We are in a moment in my opinion that Manchester [United] do a few changes," said 36-year-old Ronaldo.

"They buy me, they buy [Raphael] Varane and [Jadon] Sancho."

Portugal international Ronaldo rejoined the club in the summer after a move from Juventus, while United signed defender Varane from Real Madrid and winger Sancho from Borussia Dortmund.

"The adaptation will take time, even the system of the game that we play, but I think step by step we have to put it in our mind that everything is possible," added Ronaldo, who was speaking to Sky Sports.external-link

"Everyone should know their role. I know my role in the team, in the club - my role is to score goals, to help the team with my experience and knowhow to understand the game.

"If everyone is thinking like that, sacrifice for the team, I think we will be a better team."

Ronaldo scored the winner for United after they came back from 2-0 down to beat Atalanta in a Champions League group game in midweek.

He has six goals in eight appearances for Ole Gunnar Solskjaer's team and, despite being questionedexternal-link over his work-rate, Ronaldo says he will "close mouths and win things".

"Criticism is always part of the business," he added.external-link "I'm not worried about that. And I see it as a good thing to be honest.

"If they worry about me or they speak about me, it's because they know my potential and value in football still."