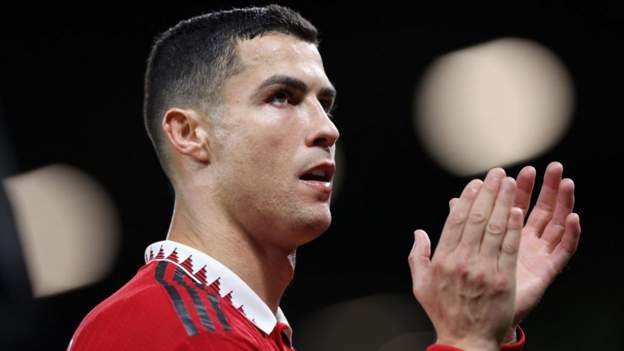 Manchester United say they are taking "appropriate steps" after Cristiano Ronaldo's interview in which he said he was "betrayed by the club".

The Portuguese forward said he had "no respect" for manager Erik ten Hag and is being forced out of Old Trafford.

The club will not comment further until "this process reaches its conclusion".

After a wide-ranging interview with Piers Morgan for Talk TV, the future of Ronaldo at Man Utd is in doubt.

The 37-year-old Ronaldo will captain Portugal at the World Cup in Qatar, with their opening Group H game against Ghana on Thursday.

Ronaldo was dropped for the Premier League game at Chelsea last month by Ten Hag after refusing to come on as a substitute against Tottenham three days earlier.

The Red Devils, who beat Fulham 2-1 on Sunday, are fifth in the Premier League in Ten Hag's first season as manager.

It has been quite the week at Manchester United and for Cristiano Ronaldo.

Since details of his much-publicised interview with Morgan emerged, it has felt like one drama after another as additional parts of their chat became public as the week went on.

Here's a quick guide to what has been said and by who:

Ronaldo said he feels "betrayed" by United, that the club had shown no "evolution" and that he was being forced out.A﻿s more of his interview is released he says United's owners "don't care about the club".The club acknowledges his interview and says it will "consider its response after the full facts have been established".United defender Raphael Varane says the situation "affects" all of the players.Ronaldo explains he was "close" to joining Manchester City but his "heart" took him back to United.Morgan says Ronaldo is "very happy with the way things have played out" when reflecting on their interview.United legend Peter Schmeichel says he still believes in "fairytales" and hopes Ronaldo can have a future at the club.Former Manchester United defender Gary Neville says the club must terminate Ronaldo's contract.Ronaldo reveals he rejected a £305m deal to join a Saudi Arabian club in the summer.He said he turned it down as he was "happy" at Old Trafford and "motivated to do a great season".