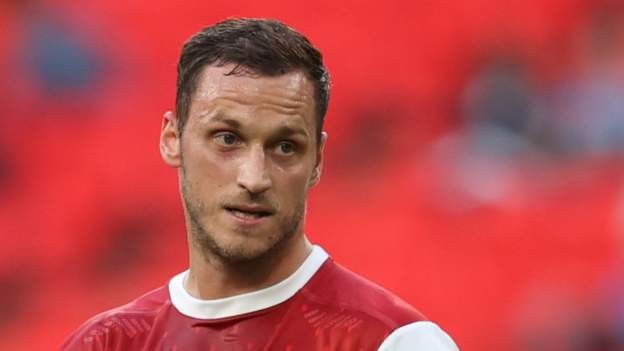 United are interested in signing ex-West Ham and Stoke forward Arnautovic, who is now 33 and playing for Bologna.

Since new manager Erik ten Hag's tenure began with a 2-1 home loss to Brighton on Sunday, United have also been linked with Juventus midfielder Adrien Rabiot.

"That's madness, thinking about signing [Arnautovic]," said Sutton. "I thought it was a spoof, it's ridiculous."

Arnautovic scored 43 goals in 184 Premier League games before making a lucrative move from West Ham to Chinese side Shanghai Port in 2019.

Speaking on BBC Radio 5 Live's Monday Night Club, Sutton added: "It's a real wrong move in terms of the eyes of the supporters. There's a million other players out there United should have been linked with. I do no get that.

"It's an absolute PR disaster. If Arnautovic comes in, that's going to put Ten Hag under so much pressure."

After pursuing Barcelona's Dutch midfielder Frenkie de Jong all summer, United have now been linked with Arnautovic, while reports sayexternal-link they have agreed a fee for 27-year-old France midfielder Rabiot.

"[Arnautovic] is a signing you get after you've got your number one signing," said Micah Richards.

"He is a good player, it just shouldn't be announced now. He should be sliding in through the back door and you think, 'oh, he adds strength in depth'.

"It's just desperation, there doesn't seem to be a plan. But players don't want to go to Manchester United now.

"Say they tried to get [Moises] Caicedo, or another young player, because of the size of the club, fans would say, 'who's this? why are we not going for the top players?'"

Brighton signed Ecuador midfielder Caicedo and Spain left-back Marc Cucurella last year, with the 20-year-old Caicedo having now established himself in their starting line-up and the Seagulls making a considerable profit by selling Cucurella to Chelsea. after a £15m arrival from Getafe.

"If you look at Cucurella, Chelsea are paying a 'risk premium'," said journalist Rory Smith. "Brighton take the risk that he might not adapt or settle, then Chelsea say 'he's proven, we'll now pay his true worth'.

"United can't do that, they can't buy a £15m relatively low-profile left-back from Getafe. What they should be able to do is attract players who are not in the Champions League and saying, 'we can get you there, by adding five or six of you together'."

Sutton added: "If Ten Hag said, 'I need patience, we're going to bring young players in, we're going to develop them, you're going to have to bear with me for two seasons', I think the fans would buy that rather than what we've seen in the last 24 hours.

"The last 24 hours have been really damaging for Manchester United. That's when it looks like they're making it up as they go along."

'We have to analyse and do better' - Dalot

Defender Diogo Dalot started Ten Hag's first Premier League game in charge of United and felt there were "some positives" to take from Sunday's loss, which was Brighton's first victory at Old Trafford.

Asked if positive results would take a long to come, the Portugal full-back said: "Obviously, that is what we are here for. This result is not going to take our heads off the path we need.

"It is a setback but now we have to analyse and definitely do better.

"There were still some positives. The second half, we had some good plays and we were a little bit more organised. We are going to have some time this week to organise and definitely do better for Brentford [next Saturday]."

Some sections of the home crowd booed on Sunday and Dalot added: "It is not an issue, they are with us 90 minutes, I am sure.

"But obviously we need to perform and we need to push them with us as well. We need to give them joy of watching us."