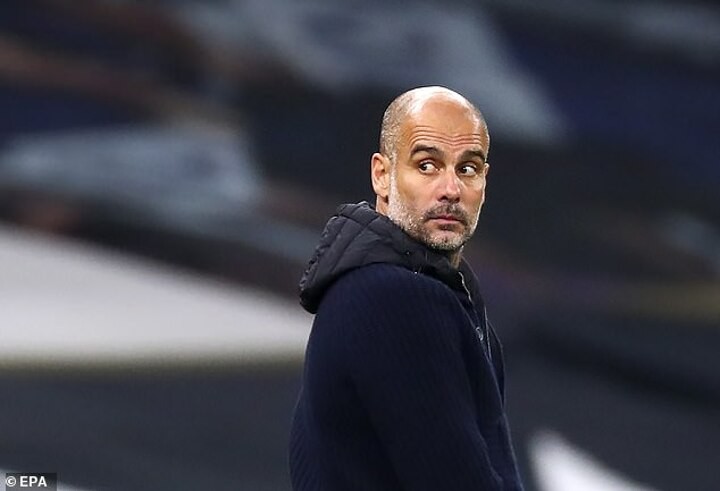 Pep Guardiola bemoaned that English teams are always at a disadvantage in Europe – but declared he feels confident that Manchester City can break their Champions League hoodoo.

The hectic domestic schedule has prompted criticism from Guardiola, Jurgen Klopp and Ole Gunnar Solskjaer this season but City's boss claimed that the fixture list is forever a drawback.

City can reach the last 16 with victory over Olympiacos on Wednesday night and know they need to progress further than the quarter-finals this campaign.

'Every season, not (just) for this special year with Covid (that) we have to adapt,' Guardiola said.

'Even when the season is normal, no winter breaks, more games. That is attractive - so the challenge is that. Nobody before did a (domestic) treble, but we did. In your mind you say "you can do it".'

City and Guardiola went soul-searching following the galling 3-1 defeat by Lyon in August and previously suffered at the hands of Tottenham and Liverpool at the same stage.

The Catalan broke his normal convention by predicting that this team will improve on previous performances.

'I have a feeling we will do really well this season,' he added. 'I don't know why but I've felt it from the beginning, since we lost to Lyon. We know what we have to do.

'The season is so young and I'm very optimistic we are going to do good this season.'

City are in need of more goals, however, after scoring just 10 in eight Premier League matches thus far. They have not struggled for them in the Champions League – with nine in three games – but Guardiola admitted he does need to find answers in attack.

'I have to find solutions to find the right way to attack and score goals,' he said. 'The way we play is quite good, I'm quite happy.

'The players are so brave, the manager has to find a way, use the qualifies and adapt. The same players can make different movements.

'I have to adjust something, it's in my hands. When I see the team, how they try and they suffer, when they do it that's when I'm at my happiest.

'I have to find a way of doing what we did in the previous seasons. We have enough players to score and we are going to do it.'