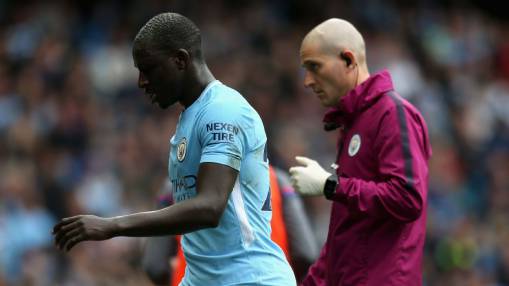 Mendy could miss most of the rest of the season after Man City confirmed that he had ruptured knee ligaments.

Ayew formed a strong bond with the youngster who was at the Marseille academy when the Ghana star was playing with the French giants.

Mendy suffered the injury in the first half of the 5-0 home win over Crystal Palace on Saturday.

City's medical team had initially hoped he had only sustained an impact injury and would be sent to see specialist Dr Ramon Cugat in Barcelona.

Tests have now confirmed he has ruptured anterior cruciate ligaments in his right knee.

The France international will undergo surgery on Friday and, although City have not said how long he will be out, players can take up to nine months to recover from such an injury.

But Mendy offered hope that he could be back much sooner when he wrote on Twitter: "Bad news guys. I will be joining Injury FC on loan for a couple months with ruptured ACL, but will be back soon and stronger hopefully."

Coach Pep Guardiola had said after Tuesday's Champions League win over Shakhtar Donetsk that he feared Mendy's injury was more serious than thought.

The setback leaves City without an out-and-out left-back, and Guardiola has indicated that he could bring in a new signing in the January transfer window.

"We thought next summer about looking for another left-back -- another replacement -- but we will see what we do," he said.

"We have alternatives in our squad -- Danilo, Fabian Delph, Fernandinho, can play there -- so we will see as we go along."