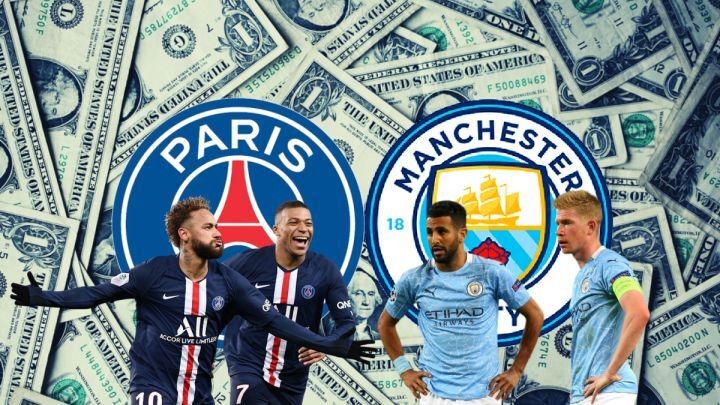 Two of Europe's mega-rich clubs face off for a place in the 2021 Champions League Final and we look at the recent transfer business that has aided their ambitions.

Recognised globally as two giants of the modern day football business model, some traditionalists - not to mention rival chairmen and fans - have questioned the fairness of Paris Saint-Germain and Manchester City’s huge state owners. Nassel Al-Khalaifi and Sheikh Mansour have ploughed billions into their chosen clubs, both on and off the pitch, and have seen the rewards, to varying degrees, come from it.

Man CIty vs PSG: the transfer spree for success

PSG and City go head-to-head over two legs of the 2021 Champions League semi-finals with both clubs still to taste the ultimate continental glory of being crowned Champions of Europe. Will this year see that change? If so, it will be to a large extent down to the investment made on some of the world’s greatest footballing talent.

As the Ligue 1 club continued their moves up the stairs of Europe’s elite, Ángel di María, who had disappointed at Manchester United was bought for $69.30m. There was also room to grab Monaco’s Layvin Kurzawa for $27.50m.

Whatever the opposite of a quiet transfer window is, this was it for the Parisian side, and was the moment they announced their real ambitions to the world. Neymar’s aggressive buyout from Barcelona broke the transfer record at the easy to remember value of €222m ($244.20m). Joining him was the young French star, on loan initially, who many believe is, or soon will be, classed as the greatest attacking player on the planet.

Kylian Mbappé’s fee was paid to AS Monaco making them $159.50m to the good and two other not inconsiderate values were made to bring in Leandro Paredes from Zenit St. Petersburg ($44.00m) and Thilo Kehrer from Schalke 04 ($40.70m).

More strength was added to the team this season as their domestic dominance was seen as a given and European success was the only prize on their minds. Abdou Diallo joined from Borussia Dortmund ($35.20m), Idrissa Gueye from Everton ($33.00m) and Pablo Sarabia from Sevilla ($19.80m). Another move from LaLiga saw Keylor Navas depart Real Madrid for $16.50m, carrying the weight of his several Champions League triumphs to a new European capital. Mauro Icardi also come in on loan.

Mauro Icardi’s move from Inter Milan was made permanent for $55.00m in a quiet business period for the bean counters.

There is no doubt that one of the stand-out players in the Premier League in the past few seasons has been Kevin de Bruyne. As he was coming to the fore, English rivals Chelsea weren’t convinced enough by his talent so sold him to Wolfsburg, only for City to bring him back a year or so later, for $83.6 million. What a bargain that has turned out to be.

Also in this transfer period, the Manchester Blues acquired Raheem Sterling from Liverpool for $70m, Nicolas Otamendi ($49m) and Fabian Delph ($13m) along with some lesser names.

By City’s standards of late, this was a quite year for transfers - possibly down to the previous season’s investment - but there was still room in the squad, and cash in the bank, to add Leicester City’s Riyad Mahrez for $74.58m. His skills continue to wow crowds and bamboozle professional defenders on a weekly basis.

With Pep Guardiola’s machine only needing the finest of fine tuning by this point, 2019/20 saw just two big money moves. João Cancelo came across from Juventus to sort out a defensive doubt ($71.50m) and Rodri was taken away from an unhappy Atlético Madrid for $68.97m. It was as though the City jigsaw puzzle was not only complete, but they were now just making sure they had numerous spare pieces in case they lost some.

Another transfer window, and another period of fine tuning. With question marks in the heart of the defence, Rúben Dias was signed from Benfica for $74.80m while AFC Bournemouth were handed $49.83m to free them of Dutchman Nathan Aké - the luxury of being able to buy back-up to the back-up it would seem. Valencia’s talented Ferran Torres was also brought in for $25.30m, among other business.