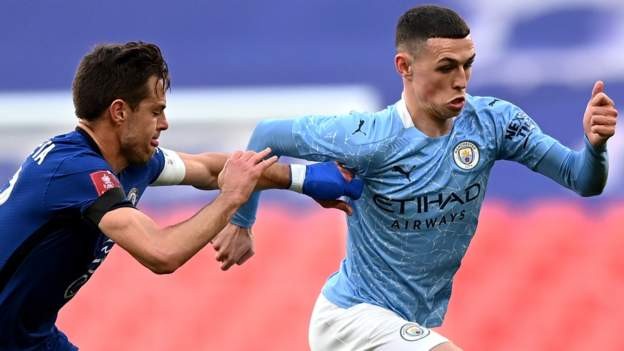 Manchester City will be crowned Premier League champions if they beat Chelsea at Etihad Stadium on Saturday.

The teams will also meet in the Champions League final later this month, though Pep Guardiola says his sole focus is securing the title.

"There is not one thought about the final of the Champions League because we don't have the Premier League in our hands," said the City boss.

Fans should not travel to Turkey for Champions League final, says UK government

City's victory against Paris Saint-Germain on Tuesday sent them through to their first Champions League final and gives Guardiola the chance to lift the trophy for the third time as a manager after his double success with Barcelona in 2009 and 2011.

However, the Spaniard says winning the domestic league is always his priority over European success, with City on the brink of a third Premier League title in four seasons under his stewardship.

"Always I've said the Premier League is the most important title," he added.

"Of course the Champions League is so special, it's nice, but this one means consistency and many things."

Manchester City's hopes of an unprecedented quadruple were ended by Chelsea last month with a 1-0 defeat in the FA Cup semi-final at Wembley.

Blues boss Thomas Tuchel says that game and Saturday's meeting will have no bearing on the Champions League final.

"I think the final in Istanbul will be pretty unique no matter the score tomorrow, no matter if we win, they win or if we draw," he said.

Fellow defender Eric Garcia is expected to remain out with a fever but City have no other reported fitness issues.

Chelsea are again without Mateo Kovacic because of a hamstring problem.

Antonio Rudiger, who missed the league win against Fulham because of a facial injury, played against Real Madrid in midweek wearing a protective mask.

Guy Mowbray: Blue is definitely this season's colour, with all the cool trophies to be seen wearing ribbons of whatever shade.

Manchester City already have the League Cup, and a win here will secure them the Premier League trophy for the third time in four seasons before these two meet again in Istanbul at the end of the month in club football's most glamorous seasonal soiree.

While City's place in the spotlight was forecast by all (once over a relatively scruffy start), Chelsea have been the rising stars of the year. Previously just a part of the pack, they've responded magnificently to the methods of Thomas Tuchel - who's not given them a complete makeover, but rather a light airbrushing in the areas most needed.

Eighteen clean sheets in 24 games - only conceding more than one once (freakishly against West Brom) - shows that functionality over flamboyance is a la mode down the King's Road in 2021.

It brought deserved success against City in the FA Cup semi-final three weeks ago - a game in which Guardiola's players looked uncommonly out of sorts. I wouldn't expect that to be the case again here.

After being almost perfect against PSG, City will be fired up for getting the job done, opening the champagne and laying a marker down for 29 May.

That's when the season will end, before the next one comes round so very quickly with the Community Shield. It could be Manchester City v Chelsea. What a very fashionable fixture.

It's difficult to second guess Guardiola's team selection but I'd expect Tuchel to pick a strong side. Chelsea are still fighting for fourth place - to make sure they are in the Champions League next year, as well as trying to win it this season.

Tuchel's side fully deserved their win over City at Wembley in the FA Cup semi-final last month but a stronger City line-up should come out on top at Etihad Stadium.

City have won 20 of their past 22 Premier League matches. The 60 points they have earned during this run is only one fewer than Chelsea have managed all season.They are only one point shy of last season's final tally of 80. Manchester City have lost two of their past three home league games and could suffer consecutive top-flight defeats at the Etihad Stadium for the first time since February 2016.A team managed by Pep Guardiola has never lost successive top-flight home fixtures. This is his 221st top-flight home match as a manager.City can concede multiple goals in four consecutive top-flight games at home for the first time since October to December 1978.A third Premier League trophy would put Guardiola level alongside Arsene Wenger and Jose Mourinho as the non-British managers to win the most English top-flight titles.Sergio Aguero is one short of equalling the Premier League record for most goals for a single club: 183 by Wayne Rooney for Manchester United.Aguero is the leading Premier League goalscorer against Chelsea, with 10 goals. Kevin de Bruyne has scored in three successive league matches against Chelsea.

Thomas Tuchel is the first manager to oversee 11 clean sheets in his first 15 Premier League matches in charge.Chelsea are vying to win three league games in a row without conceding for the first time since November 2017.The Blues are unbeaten in their 11 away matches in all competitions under Tuchel, conceding just four goals (W8, D3). They can go 12 consecutive away fixtures without defeat for the first time since a run of 15 from April to November 2014 under Jose Mourinho.Chelsea are winless in all four league games in 2020-21 against the three teams currently above them in the table, managing just two points and one goal. All eight of Kai Havertz's goals for Chelsea in all competitions have been scored in London, including seven at Stamford Bridge.