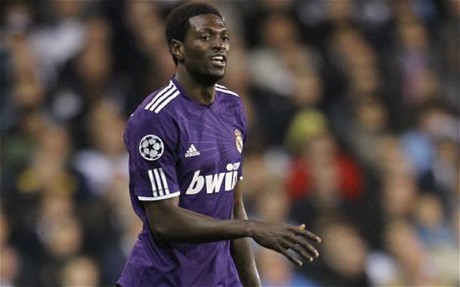 Emmanuel Adebayor says he is not interested in joining Zenit St. Petersburg despite a bumper offer to sign him from English club Manchester City.

The Russian side slapped in an offer to sign the ex-Togo international from the English side last week.

Friends close to the striker have told MTNFootball.com that Zenit are ready to offer him a better deal than the bumper salary he receives at Man City.

But the lanky striker, who currently resides in Ghana, says he is not interested in playing in the Russian top-flight.

â€œI have nothing against Russia, but I donâ€™t see myself playing in the Russian league," Adebayor said at his charity event in the northern part of Ghana.

â€œI once even dated a Russian lady so the question of me having some hatred for the country is out.â€

Real Madrid were interested in signing Adebayor to a permanent deal after he spent six months on loan at the club last season.

But the terms offered by the Spanish giants have not been accepted by Manchester City which has prompted other teams to express interest.

His huge annual salary believed to be Â£7m has proved to be a stumbling block to many teams who are interested in signing him.

There have been reports of a frosty relationship with City coach Mancini after he was left on the bench of the English side for most part of last season.

Adebayor insists he will happily return to Manchester City if no suitable offer to prise him away for the Premier League comes.

â€œIf I have to go back to City, I will do it with pleasure,â€ Adebayor said when he commissioned two projects he personally financed to provide clean water for two deprived communities in Ghana.

â€œA lot of people thought my form had dipped that was why I had limited playing time in London, but I proved them wrong when I joined Madrid.â€

Adebayor commissioned the projects in the towns of Hamile and Koro in the northern part of Ghana.

The women and children in the two towns had to walk for six milesÂ every dayÂ to a river to get water to their daily chores which has affected child education in the area.

The water project will ease the water problems for the two towns while preventing disease they contracted while drinking the water from the river.

Adebayor was officially named as a son of the two towns and was given a sheep to thank him for his kind gesture.