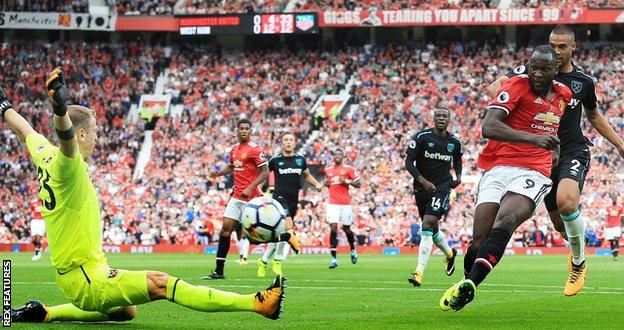 Lukaku has scored on his Premier League debuts for West Brom, Everton and now United, as well as netting on his senior debut for Belgian side Anderlecht
Share

With only six games into the new season, the Manchester clubs are already dominating the English Premier League.

Manchester United and Manchester City are in a good form of demolishing their premier league opponents.

Both teams are first and second on the log with the same points but Manchester City has a superior goal difference.

Manchester United and Manchester City are on 16 points with 5 wins and 1 draw, only separated by a goal difference of 15 and 19 respectively. Both teams are yet to lose in the premier league.

It is not yet clear if this season we are expecting a two-horse race. Online gamblers may have a better insight, Australian casino players prefer online casinos like casino aus.

Chelsea is maintaining a small gap between the two Manchester heavyweights with 13 points from 6 games.

Both teams were really active during the transfer window and Manchester City was the biggest spender in the premier league.

The Citizens strengthened their squad adding more creativity in attack, solid defence and a firm midfield.

Manchester City has scored 16 goals in their last three premier league game. Watford was thumped 6-0 in front of their home fans while the following weekend City had a convincing win beating struggling Crystal palace by 5-0.

Three weeks before the Citizens embarrassed Liverpool by thrashing them 5-0 at the Etihad Stadium.

The previous set of games City played handed them a superior goal difference as their rival United managed to score only a single goal against Southampton.

Furthermore, Manchester heavyweights are not only performing in the premier league but in all competitions.

Both teams are firing on all cylinders and are up to the task in all games which is evidenced by the number of goals scored against the opponents they met.