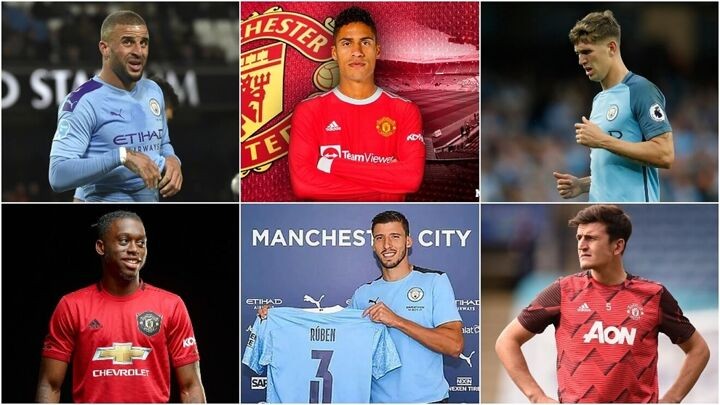 Manchester United's signing of Raphael Varane for 50 million euros reinforces the trend that has been set at the top level of European football in recent years, with teams prioritising the construction of a rock-solid defence.

Nowhere has this trend been more evident than in Manchester, as both Manchester United and Manchester City have spent 765m euros on defenders since 2016.

The value of this trend was evident in the blue half of Manchester last season, as Manchester City looked to recover from a disappointing 2019/20 season by signing Ruben Dias for 68m euros from Benfica, alongside Nathan Ake for 45.3m euros from Bournemouth.

Dias would go on to play a pivotal role in the Sky Blues' Premier League title triumph and run to the Champions League final, and the 24-year-old capped off an outstanding season by being named the Premier League Player of the Season.

As for Manchester United, Alex Telles was brought in for 15m euros from Porto.

The summer of 2019 saw the Red Devils look to restructure their defence, as they splashed out on two key signings. Harry Maguire became the most expensive defender in Premier League history as he was signed for 85m euros from Leicester City, while Aaron Wan-Bissaka moved to Old Trafford for 55 million euros from Crystal Palace.

That summer, Manchester City spent 65 million on Joao Cancelo from Juventus, as well as Angelino and Pedro Porro for 12m euros each, but the latter two failed to establish themselves in the first team.

This was the quietest summer in terms of defensive signings for both clubs, with Diogo Dalot's arrival at Manchester United from Porto for 22m euros the only reinforcement by either team to the back line.

For Manchester City, they spent 205.2m euros on defenders alone this summer, with Aymeric Laporte arriving from Athletic Club for 65m euros, Danilo arriving for 30m euros from Real Madrid, Kyle Walker moving to the club for 52.7m euros from Tottenham and Benjamin Mendy joining for 57.5m euros from Monaco.

As for Manchester United, 35m euros were spent to sign Victor Lindelof from Benfica, whose place in the starting XI now looks to be under threat following Varane's arrival.

Shortly after Pep Guardiola arrived at Manchester City in the summer of 2016, he started work on restructuring his defence, as John Stones arrived for 55.6m euros from Everton and as Oleksandr Zinchenko also arrived on a 2m euro deal from FC Ufa.

Jose Mourinho also got to work on building his defence after taking charge at Manchester United that summer, as Eric Bailly joined on a 38m euro deal from Villarreal.