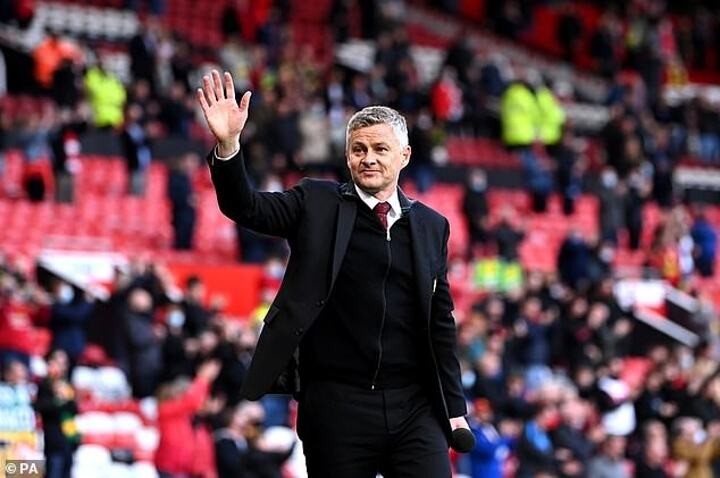 Ole Gunnar Solskjaer has hinted Manchester United could bring in a new striker in the summer transfer window but refused to be drawn in about the future of wantaway Tottenham star Harry Kane.

Edinson Cavani had signed a one-year contract extension earlier this month, keeping him at the club until June 2022, and having tied the experienced Uruguayan down to a new deal, it appeared as if a striker had been pushed down the list of transfer targets this summer.

But Solskjaer has since refused to rule out signing a new No 9, only a day after Kane informed Spurs he wanted to leave the club in search of silverware.

Asked in his press conference following the 1-1 draw against Fulham - in which Cavani scored a sublime 40-yard lob - if he could rule out signing a striker, Solskjaer replied: 'No, of course I can't.

'Yeah Edi (Cavani) signed but how many good strikers have we had at this club? And I can't say we're not signing a striker, of course not because we're building towards a better squad.

'We're top three two years on the bounce but we're still nowhere near where we want to be.

'Hopefully we'll end up with a stronger squad at the start of next season and be more consistent and challenge the ones in front of us.'

The news Kane wants to leave Tottenham in his desperate bid for silverware has sparked fresh speculation over where he could end up this summer.

United are long-term admirers of the England and Tottenham talisman, but Solskjaer stayed away from answering questions surrounding his future.

When asked about Kane's future in his press conference on Tuesday, the United manager added: 'I can't comment on other teams' players and what's been speculated and said, so I want to show the respect Tottenham deserve as well to not talk about other teams' players.'

Kane's future is set to dominate this summer's transfer window, alongside that of Borussia Dortmund striker Erling Haaland.

And it was reported by Sportsmail on Tuesday evening that Kane will not back down from his intention to quit Tottenham this summer despite the club's insistence he isn't for sale.

United and Chelsea are keen on signing Kane but it is understood that Manchester City are emerging as the leading contenders for the England captain.

Kane is keen to have his move sorted by the time England begin their Euro 2020 campaign in a little over three weeks - but the likelihood of that happening appears remote.

However, Kane is fully prepared to play the long game and is unwilling to let the club talk him into changing his mind for a second successive summer.