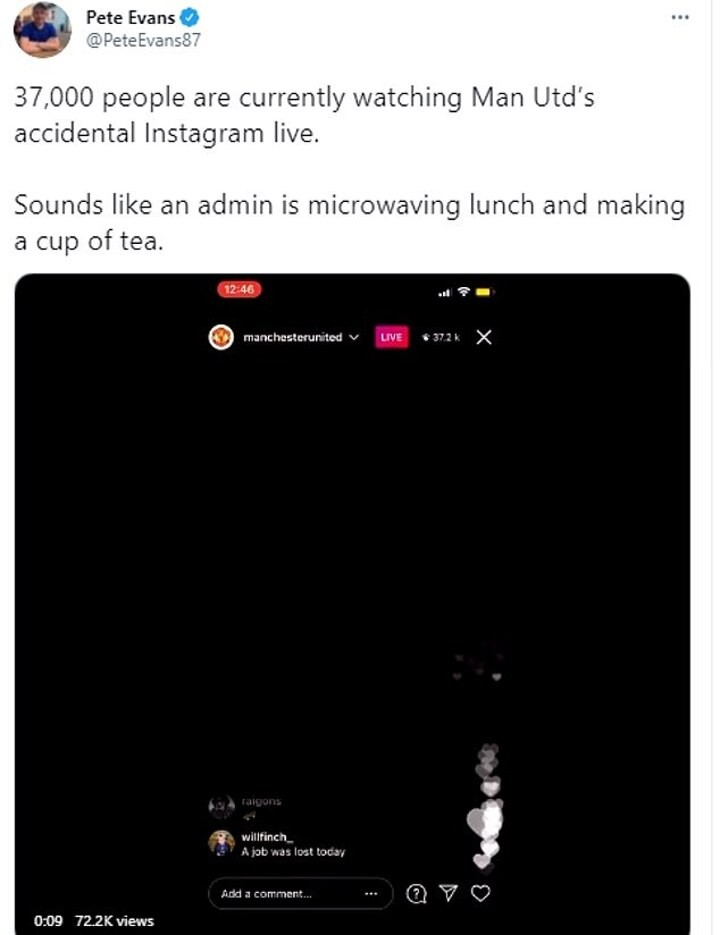 The current pandemic has left most of the country au fait with the perils that come with live video, be it through school classes, university lectures or work meetings.

The fear of unmuted microphones or cameras accidentally left on are the stuff of nightmares for many, with countless horror stories and scenes shared on social media.

So when an employee with access to Manchester United's Instagram account inadvertently shared his lunchtime routine with more than 37,000 followers, hearts went out to the unsuspecting victim.

Footage of the scene was recorded and shared on Twitter on Wednesday afternoon, after the United account went live for several minutes.

At one point 37,200 supporters were left watching a blank screen, while noises could be heard in the background.

The knocking together of plates and the sound of a microwave gave those following the indication that they were seeing into a kitchen, but there were no images to back that up, with the camera showing only a dark surface.

Those that saw it could only share in their anguish for the employee.

'Sounds like an admin is microwaving lunch and making a cup of tea.'

He followed up by adding: 'I echo every comment that says "my worst nightmare", or "I feel sick just thinking about it". As a social media manager it doesn't get much worse!'

Others poked fun at United's recent matches, suggesting the non-event was on a par with the Chelsea display.

'In comparison to the games it’s quite exciting,' said user Michael Jenner, while James McCluskey added: 'More exciting than the Chelsea game.'