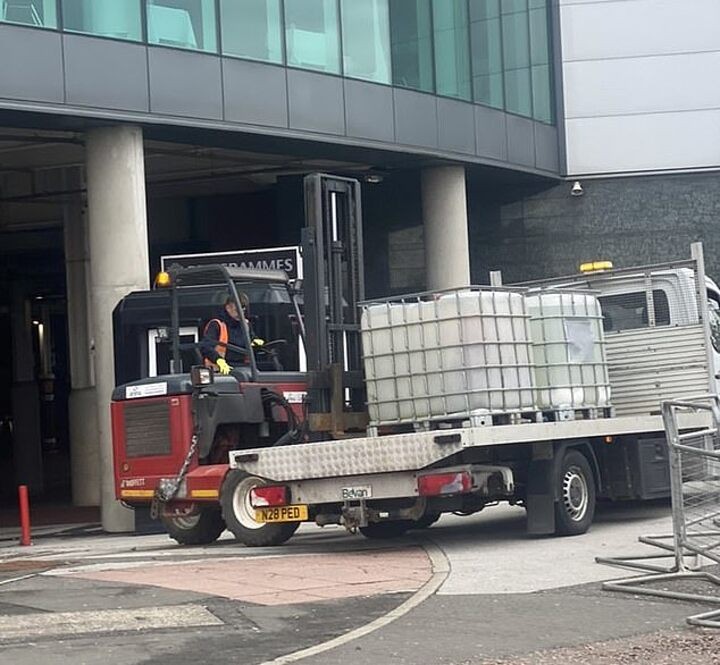 Manchester United appear to have been spotted building new barriers around Old Trafford as they bid to repeat the incendiary scenes that saw their Premier League home match against Liverpool called off last Sunday.

Photos emerging on social media have shown trucks outside the stadium and security personnel standing next to new-looking barriers, with the club desperate to avoid any repeat of the shocking incursion that saw fans enter the pitch and stands at their home.

Campaigners have warned that more demonstrations could be planned, and United are taking no chances after a number of ugly incidents last week including attacks on police officers and unrest outside the Lowry Hotel where the players were staying.

United's clash with their fierce local rivals had to be postponed following a lengthy delay while officials attempted to make the stadium and city safe for the match to go ahead.

Furious fans expressed their rage against owners the Glazers after becoming incensed by the announcement of the European Super League last month, which included United as one of the founding members.

Hundreds of supporters forced their way inside the historic stadium and made their way onto the turf and across the stands in a show of rebellion against the way they feel the club is being run.

Greater Manchester Police, who had the final say on the postponement of the game, later confirmed that two officers had been injured in the surrounding protests, with one being 'attacked with a bottle and sustaining a significant slash wound to his face, requiring emergency hospital treatment.'

The mob of intruders at the stadium are thought to have gained access to Old Trafford through the Munich Tunnel, pushing down barriers despite security guards' attempts to stop them.

That could have compelled security chiefs at the club to reinforce structures around the ground, with the hope that any similar insurgences will not be successful in the future.

Some of the crowd kicked footballs that had been set up for the game while wearing green and gold scarves, which have become emblematic of the anti-Glazer movement as the colours of Newton Heath, the predecessor club to United.

There were clashes as the angry visitors tried to break police lines outside the stadium, with officers drawing batons to keep the crowds back and bottles and other projectiles thrown.

A police presence of the kind seen on Sunday, backed by horses, is certain to be present again for the scheduled visits of Leicester on Tuesday and Liverpool for the rearranged fixture on Thursday.

United were one of six Premier League clubs enlisted in the doomed Super League project last month, withdrawing 48 hours later following a furious backlash from the public, including club legends such as Gary Neville.

Joel Glazer subsequently apologised, but the many placards visibly criticising him during the day of turmoil were a clear display that those words fell on deaf ears.

United are also due to face Fulham in their final Premier League game of the season on May 18.