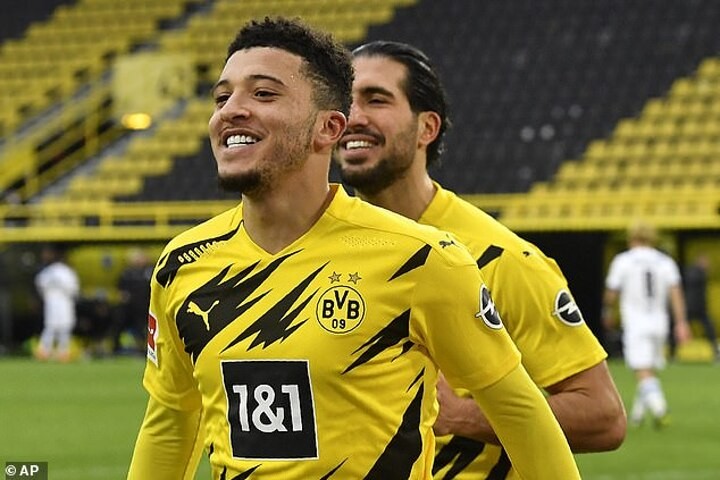 Manchester United could revisit a move for Borussia Dortmund and England star Jadon Sancho this summer.

Last year, United saw their pursuit of the winger end in disappointment as they failed to agree terms and the 21-year-old remained with the Bundesliga side.

Erling Haaland is still the Dortmund player of greatest interest to United but, having closed negotiations with Sancho's agent Emeka Obasi last year, they may be reopened for the winger.

Dortmund chief executive Hans-Joachim Watzke last week admitted the club would be prepared to sell Sancho for an 'exceptional offer'.

'I'm not getting involved in probabilities, it's no good. Jadon Sancho has been with us much longer than Erling Haaland. We'll have to speak to Jadon, too,' he said.

'If there is an exceptional offer we will discuss it with the player and the agent, as always.'

United have recruited Amad Diallo and Facundo Pellistri for a combined £46million and both youngsters play on the right, the same side as Sancho.

And though a transfer seems less likely than last season, the fall in Sancho's value could be tempting.

The pandemic-hit finances mean a lower transfer fee and Dortmund's poor Bundesliga campaign, seven points off the Champions League places, have combined to make an exit for a reasonable sum more realistic.

MEN report that United were surprised by Sancho's salary demands and scant progress was made at the negotiating table.

The former Manchester City academy starlet is contracted to Dortmund until 2023 and managed to bag 12 goals with 16 assists this term despite battling injuries.

United are prioritising a striker and centre-back but it will be fascinating to see if they can be tempted to have another swing at signing Sancho this summer.