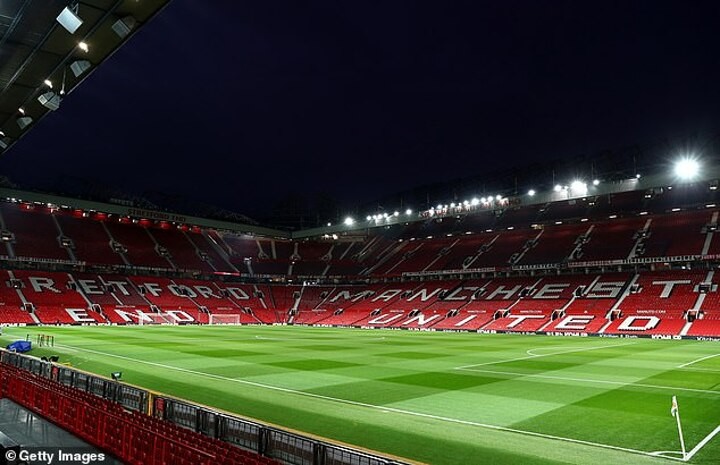 It's nicknamed 'the Theatre of Dreams' but as Gary Neville has repeatedly pointed out over the last couple of weeks, the cold reality is that Old Trafford is anything but.

That's not because of Ole Gunnar Solskjaer's failure to deliver a Premier League title to Manchester United fans. Neville has no element of doubt about it - it is the fault of the Glazers, who he says have left the venue 'rusty and rotting'.

At surface level, Old Trafford appears to be a fantastic stadium and its capacity of 76,000 is the highest in the Premier League. But the work to fit that many people in was completed back in 2006 and given the go-ahead before the Glazers bought the club in 2005.

Now, bigger does not mean better and other venues lead the way. Tottenham's stadium is perhaps the finest in all of sport, Manchester City have since expanded the Etihad while United fans may even cast a begrudging eye down the M62 at Anfield and acknowledge that Fenway Sports Group, for their downsides, have overseen a great job of renovating Liverpool's Main Stand.

According to the football blog Swiss Ramble, United have spent £118m on their stadium in the last 11 years whereas Liverpool have spent £278m, City £374m and Tottenham £1.4bn.

And at City, the corporate package exceeds anything United have to offer. The Tunnel Club is the jewel in the crown, allowing supporters to watch teams line up before walking out onto the pitch via windows in the tunnel. That experience costs upwards of £299 per game but even City's fan zone is widely considered to better than what is on offer at United.

City benefit from having a lot of land around the club whereas at United, space is a little bit more cramped. Specifically, it is their south stand that is the issue.

There is a railway track that runs behind that part of the stadium which, along with the housing, restricts how much United can do to expand it going forward.

Sportsmail reported in February last year that while United would ideally like to expand Old Trafford's capacity up to 90,000, work to get it up to scratch would not just cost £200million, but would also leave United looking for a temporary home.

'It's a very complex engineering challenge to deliver,' Manchester United managing director Richard Arnold said, according to the BBC in 2018. 'It would be a multi-season challenge and it isn't certain that there's a way of doing it which doesn't render us homeless.'

The common consensus from every United fan that sits in that part of the stadium - which was renamed the Sir Bobby Charlton Stand in 2016 - is that it feels out of date. The roof has been known to leak when it rains and this has long been a complaint of matchgoing supporters.

In April 2019, a storm hit north west England and in the hours before the Manchester derby at Old Trafford, part of the roof gave way and water was pouring onto empty seats below.

A similar thing happened in 2012 when Old Trafford hosted Olympic football - a torrential downpour during Spain v Morocco saw leaks appear in numerous parts of the roof. Stewards were able to move fans around the stadium that day because it was not at full capacity.

Another example where Old Trafford has caused embarrassment has come in their rodent issues.

Sportsmail reported back in January 2015 how United were battling with a mice infestation in the stadium and that as well as getting onto the pitch, the critters had also made their way into staff offices.

But they failed to act on it and later that year, in September, United were criticised  by council inspectors for 'failing to implement adequate procedures to control pests', particularly in areas of the stadium where food was being served.

Mice have repeatedly been a problem at Old Trafford and it is likely that it is in part an issue of its location, near to a canal.

In 2010, a mouse was seen scurrying across the pitch as United played against West Ham and four years earlier, in 2006, Burton Albion complained to the referee during their 5-0 FA Cup defeat that there were mice all over the pitch.

This weekend's protest against the Glazers coincided with Neville's impassioned plea for the United owners sell up and he again underlined how unhappy he is with the standard of the stadium.

'You look at the club now, this stadium I know it looks great here (on TV) but if you go behind the scenes it's rusty and rotting,' Neville said. 'The training ground is probably not even top five in this country, they haven't got to a Champions League semi-final in 10 years and we haven't won a league here for eight years.

'The land around the ground is undeveloped, dormant and derelict, while every other club seems to be developing the facilities and the fan experiences.

'The Glazer family are struggling to meet the financial requirements, and the fans are saying enough is enough.'

And United fans share his dismay about Old Trafford. As debate raged on social media on Sunday about the Glazers, with some rival fans pointing to how much money the club has spent on transfers in their time, United supporters were quick to reference the condition of Old Trafford in reply.

'No investment in years at Old Trafford, leaks in the roof just show how much the Glazers care about our club,' one fan wrote. 'The legacy of our club is at risk if these people continue to take from this club. The time for them to go is now, no one wants an apology. #GlazersOut'

Another said: 'They don't care about the club and use it as a cash cow. Old Trafford is falling apart, leaks everywhere and the roofs (sic) a mess. Yet they've not done anything to fix the structure of the stadium.'

If the Glazers really are as thick-skinned as people think and have no plans to sell United, then renovations to the stadium are urgently needed. There is scope for the matchday experience of every United fan to be improved when they can finally return to games.