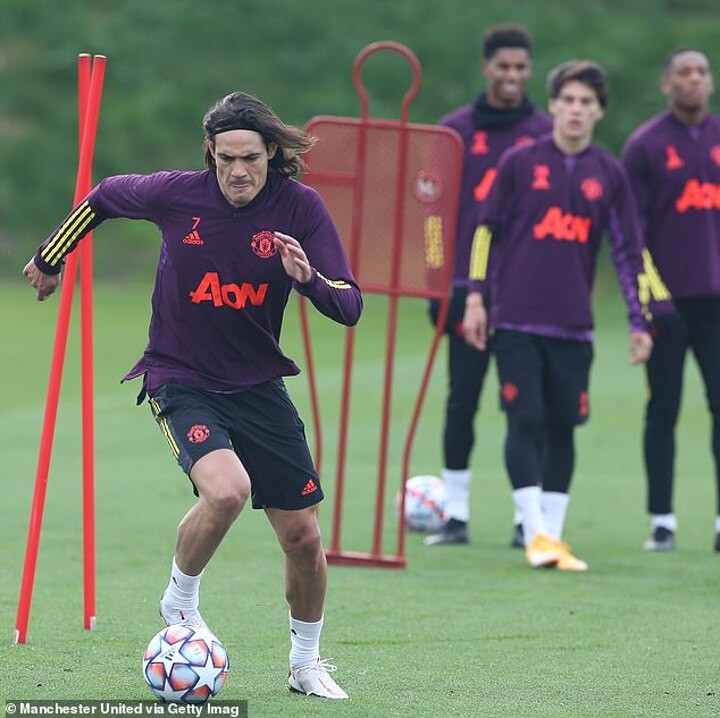 Edinson Cavani will not make his debut for Manchester United against former club Paris Saint-Germain on Tuesday after the striker was left at home for the Champions League opener in Paris.

The 33-year-old did not travel to the French capital with the first-team squad on Monday and is expected to continue training back at the club's Carrington base this week.

There are reports claiming that the Uruguayan could still make his own way to Paris for the match but it appears unlikely considering he was not at Manchester airport.

Club captain Harry Maguire also did not travel with the group despite starring and scoring in the Red Devils' 4-1 win over Newcastle at the weekend.

There were hopes Cavani could make his United debut at the ground where he became PSG’s all-time leading scorer and fans’ favourite during a seven-year career in France.

However, Cavani may not have to wait until the weekend to make his first appearance for the club, when they welcome Chelsea to Old Trafford.

PSG boss Thomas Tuchel believes Cavani is still one of the best strikers in world football but played down any significance of a potential return for the Uruguayan.

Cavani left the club as a free agent in the summer – missing PSG’s run to the Champions League final – and joined United on deadline day.

He has been in quarantine for the last two weeks and only trained with his new team-mates twice.

‘He lives for goals and scoring,’ said Tuchel. ‘When he has the confidence, he is one of the best No 9s in world football. If you play for so long in a club like ours and have such a connection with the fans, you have character and he deserves the appreciation.

On the player’s departure after refusing to sign a contract extension to he could play in the latter stages of the Champions League in Portugal, Tuchel played down suggestions that Cavani will have a point to prove.

‘I was hoping obviously to play in Portugal with everybody in my squad. It wasn’t just my team other teams had their issues,’ he added.

‘It wasn’t just Edi. Covid made the whole situation really complicated and this was for many teams not just us.

‘It doesn’t change this game at all. He wrote part of our club history and is definitely a great player.

But it’s not a story about PSG v Edi or vice versa.

‘It’s hard to defend against him and he can make the difference so we’ll have to be careful.’