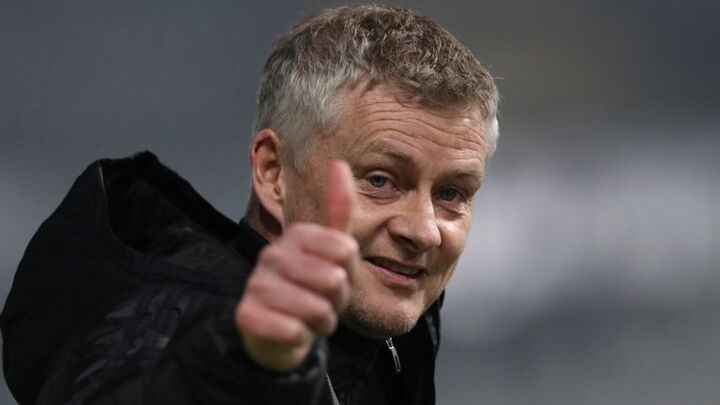 When Ole Gunnar Solskjaer returned to Manchester United as manager in 2018, he saw it as a homecoming, returning to a familiar environment he'd flourished in.

Those who decided to bring him back believed he could also be the man to restore some of the values and principles that had faded since the retirement of Sir Alex Ferguson.

However, while Solskjaer has always been comfortable at Old Trafford, there is an argument that feeling comfortable in his role as United manager is something that has taken him longer to get his head around.

What Solskjaer managed to achieve on and off the pitch at Tottenham on Sunday is perhaps the biggest sign yet that the Norweigan has got to grips with one of the most scrutinised roles in world football, and is enjoying the challenges and rewards it brings.

On the pitch, whether it was a response fuelled by anger or injustice, United put in an eye-catchingly powerful performance, starting with six outfield players who had played through the Jose Mourinho era and a couple who the former boss had marginalised.

Scott McTominay - a player selected for special praise and an even more precious accolade by Mourinho - spoke of a calm response at half-time and a demand to patiently search out solutions and goals. That plan was executed brilliantly, making it 28 Premier League points rescued from losing positions.

'Progress' is a word that crops up a lot in discussions about the direction United are going in but on the evidence of the performances of players like Paul Pogba and Luke Shaw, it seems individuals are flourishing and what the team offers as a whole is also more compelling.

Solskjaer showing his own steel

Off the pitch, Solskjaer has always offered a bright and positive demeanour. What he's done expertly in more trying times is hide the fire that lurks beneath that cheerful countenance. Talk to any of his team-mates or people who were at the club when he was a player and they'll tell you about a determined, driven, and intelligent young man.

There is a steel that runs through Solskjaer, something that was apparent to many who came across him, and whether it was righting the wrong of October's punishing 6-1 defeat to Spurs at Old Trafford, the United manager showed his teeth in his response to that disallowed first goal at the Tottenham Hotspur Stadium.

Everyone looks for moments to pin a special importance to, but it seemed to me that this was one of those instances in which Solskjaer was feeling empowered enough to go on the front foot on enemy territory. This time last year he may not have been so willing to talk about the impact or trajectory of McTominay's right hand, but in the wake of a decisive win, he opted to go on the offensive in a manner rarely glimpsed in his time back at United.

While the nature of the win will have emboldened the manager, so too will have the recent restructuring behind the scenes, with promotions for people Solskjaer knows and trusts. Yes, there was shock at the sudden departure of another Old Trafford hero in Nicky Butt, but the introduction of Darren Fletcher and elevation of John Murtough are moves that only strengthen Ole's hand and give him added certainty about the way ahead.

In an interview last week, Solskjaer attempted to put his "trophies can mask problems" comment into some context, explaining to me that he sees winning silverware as the third stage of a process that starts with consistency and momentum. The power brokers at Old Trafford have been as delighted with Solskjaer's work behind the scenes as they have with the first-team's improvements in form and, while every negotiation is unique, I don't expect too many bumps in the talks to extend his contract when the season is finally completed.

With just one defeat in the last 25 Premier League games, United fans have still been focussing on the chasing pack rather than Manchester City in the box seat. But after a shock home defeat for the "noisy neighbours" against Leeds and a second United victory in nine visits to Spurs, the debate has suddenly turned to 'what if?' The Reds still have a game in hand on the Sky Blues. Win that, and it's an eight-point gap with six games to go.

I've already said this season that United supporters have enjoyed being back in the title conversation, and while none of them are getting especially excited right now, Solskjaer looks destined for a second-placed finish that would arguably trump the one Mourinho has been so proud of since May 2018.

Writing may be on the wall for De Gea

Solskjaer is weary of the national debate about the goalkeeping situation he's presiding over, and whether he's preparing to stick or twist when it comes to David de Gea and Dean Henderson. At Spurs, he was determined to put out his best team and while there's a debate over whether that includes Mason Greenwood or not, what it doesn't appear to include is De Gea.

The Spaniard may well get the gloves again for Thursday's visit of Granada in the Europa League, but with form and age both in Henderson's favour, so too are economics. Having said that, because of his wages, it'll be a challenge to find De Gea a new club this summer. The players will already be aware of Solskjaer's thought processes and while he might not be telling journalists who is his No.1 in goal, both men will already know how the land lies going forward.

What about Cavani's future?

Edinson Cavani's situation is another intriguing one. His goal against Tottenham showcased his predatory instincts and, as a striker, he's well versed in the movement and application that Solskjaer wants to see more of from his other front men. Cavani's age isn't a problem and United seem to be getting better at playing to his strengths too.

But if the salary he's being paid and the prospect of Champions League football aren't enough to extend his time at Old Trafford, then perhaps it's a simple factor of family that's been thrown into sharp focus by the pandemic, and that is turning his head back towards South America.

Solskjaer would love to keep the Uruguayan but the arrangement has to be right for both parties and this is one United manager that wouldn't get in the way of a player's family ties. However, another season of Cavani would also, potentially, remove the need to bring in extra firepower this summer and save money that could then be spent strengthening other areas.

Whatever happens with Cavani, United will have to box clever in the transfer window again. It doesn't mean there won't be spending because there will be, but it may well be along the lines of the last summer window with care applied to the departure process as much as the arrivals to make the best use of funds available.

Pogba looks as contented as ever

One missing ingredient right now is the murmuring that usually goes hand in hand with Pogba at this time of the year. The French midfielder looks as contented as he's ever been in a United shirt, allied with fitness and hunger that's given him the tools to exploit the talent that most agree has always been there.

At Spurs, Pogba provided another reminder that if Bruno Fernandes isn't firing or is stopped from playing, he has the gifts to counteract those challenges. The third goal was an example of how Pogba has the ability to suddenly go through the gears, when he wants to, and perhaps most encouragingly it was at the end of a hard game.

The reality is, though, that the forthcoming transfer window will be about fine-tuning the squad and adding quality to it, meaning that perhaps for the first time since Pogba returned, there are more reasons to stay than to leave.

Has Greenwood solved the right-winger problem?

I began this piece by talking about the ideals and traditions held dear by Manchester United and now entrusted to the man who presented the club with one of its most dramatic and defining moments back in 1999. The United DNA might be a strangely clinical way to describe what it means to be part of the football club, but it's something understood by two players who both face an interesting summer.

The first of them is Greenwood and he has again shown his rare abilities and an eye for goal that would make his manager happy to drive him to the airport, should the 19-year old get called into Gareth Southgate's England squad for the European Championship. Greenwood isn't a natural right-winger, but he adds enough of a goal threat and quality to allow for the development of another youngster, Amad Traore.

At a time when money has to be stretched, Greenwood's progress may well mean that a wide player isn't now at the top of the transfer wish-list like it was last summer, when Jadon Sancho was so actively pursued.

Lingard may still have a United future

And another academy graduate may suddenly have a previously unlikely say in that discussion too. Jesse Lingard's loan switch to West Ham was conceived as a win-win for the player and United, but it's also benefitted David Moyes' side probably more than anyone expected.

Solskjaer talks fondly of giving the young Lingard his youth debut at Burnley many years ago, but the next conversation between the pair about how the future lies may differ considerably to their chat back in January. Lingard remains a popular member of the United dressing room, and his fate will depend on the role or number of games he'll be offered, especially if he too makes it to the European Championship squad.

So, there are plenty of variables for United fans and their manager to mull over over the coming months, and some really positive indications, too, that Solskjaer is making the right kind of progress.

But even he'd agree that winning the Europa League would represent a true signal of intent for both him and his players.