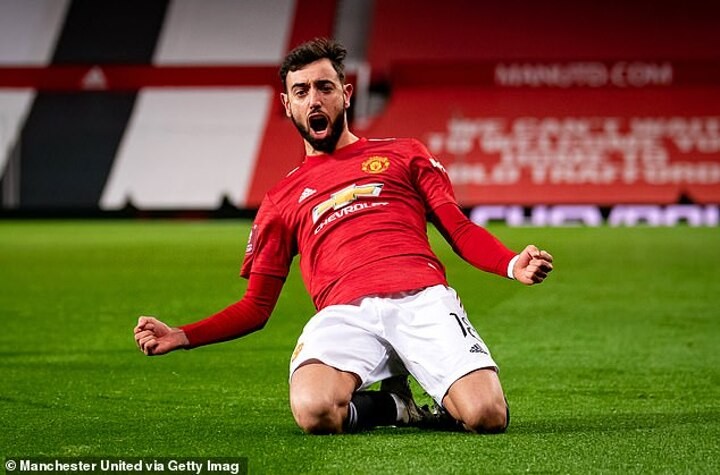 Bruno Fernandes has made opposition defences pay since moving to the Premier League and now he will cost Manchester United an extra £4.2million if he is crowned this year's Professional Footballers' Association Player of the Year.

The Portuguese playmaker is the bookies' favourite for the award after a fine season at Old Trafford.

And according to the Times, United will have to pay Sporting Lisbon an additional £4.2m as part of their deal when they initially signed the 26-year-old in January 2020.

Fernandes joined the Red Devils for an initial £46.6m from the Portuguese club, which could rise to £67.8m if all his performance clauses are met.

And of those targets include a £4.2m pay-out if he either wins the PFA Player of the Year award or or is in the top three for the Ballon d'Or while at the club.

Fernandes is enjoying a brilliant campaign at Old Trafford where he has scored 15 goals alongside 10 assists. Only Liverpool's Mohamed Salah has scored more (17), while Kevin De Bruyne (Manchester City) and Harry Kane (Tottenham) better him for assists (10).

Sporting have already received an extra £8.4m in bonus clauses from United - such is the positive impact Fernandes has had on Ole Gunnar Solskjaer's side.

The Old Trafford outfit paid the Portuguese giants £4.2m last year after qualifying for the Champions League and an additional £4.2m when he had started 25 games for the club.

So far, Fernandes' transfer has equated to £55m as he continues to galvanise the club. In 62 games the attacking midfielder has an incredible 34 goals.