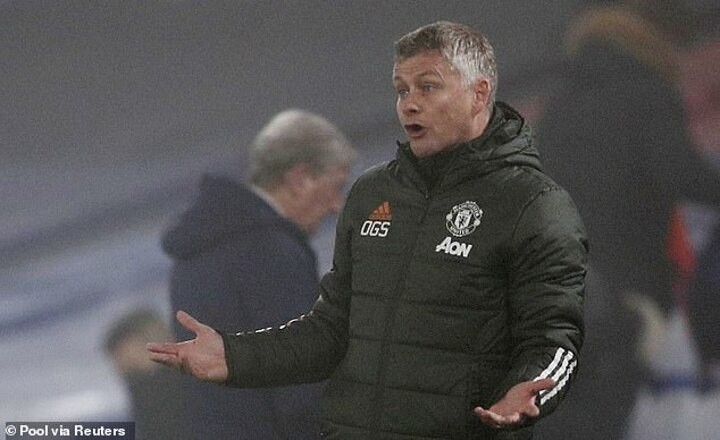 Manchester United's lack of attacking impetus is under the spotlight again after three straight goalless draws - against Real Sociedad, Chelsea and Crystal Palace.

The Premier League stalemate against the Blues was the sixth time United have failed to score in seven of their meetings against their traditional 'Big Six' rivals this season.

They have only scored one goal against those opponents and that was a Bruno Fernandes penalty in their humiliating 6-1 defeat by Tottenham on October 4.

Reflecting on their struggles, United legend Rio Ferdinand has urged Manchester United to 'move heaven and earth' to sign Kylian Mbappe or Erling Haaland in the summer to capitalise on the improvement under Ole Gunnar Solskjaer this season.

The Old Trafford great believes a statement signing through one of the world's best strikers would propel United back into challenging for the Premier League title.

Speaking on his FIVE YouTube channel, Ferdinand said about United's attack: '[Edinson] Cavani, yes, he's a good stopgap but (we need) a centre-forward. If people like Erling Haaland or Kylian Mbappe are available, you can't allow them to go somewhere else and you need to move heaven and earth to get them here.

'United are used to having superstars and those boys would change the narrative at this football club, that's how good they are.

'There's room for improvement and opportunity to improve this squad, there's players out there available, it seems. We need to be in the mix.'

At present, United have Anthony Martial, Marcus Rashford, Mason Greenwood and Edinson Cavani. They are yet to begin talks with Cavani over renewing his contract, while Martial has been misfiring this season - having scored just seven times in 33 appearances across all competitions for the club this term.

So what are Solskjaer's options this summer? Sportsmail takes a look...

Let's start with Haaland. One of two names that Ferdinand has implored his former club to sign, he certainly seems more attainable than Mbappe. However, that doesn't mean it's going to be easy.

Upon leaving Austrian outfit RB Salzburg just over a year ago, the 20-year-old rejected Manchester United's advances to join Borussia Dortmund. And United's pain has been Dortmund's gain as he has taken German football by storm.

The Norwegian has developed into one of the world's most prolific forwards having scored 43 goals in 45 appearances for Dortmund since joining. The suitors are queuing up for his signature.

Speaking last month his agent Mino Raiola revealed that 10 clubs are interested in his star client.

'It is obvious that everybody is looking at Erling as one of those potential new future stars because it's so difficult to do what he does at his age at his level,' he told the BBC.

'He will be one of the future stars of the next decade because we see that stars such as [Zlatan] Ibrahimovic, [Cristiano] Ronaldo and [Lionel] Messi are coming to an age where everyone asks themselves: "How long can we still enjoy them?" So everyone is looking for the new generation.

'Only a maximum of 10 clubs can afford to buy [Haaland] and give the platform you would like after you've been in Dortmund… and four of those clubs are in [England].

'I don't think there's a sports director or trainer in the world who would say "not interested". It's like saying: "Is there a Formula 1 team who would not be interested in having Lewis Hamilton?"'

According to German publication BILD, those 10 clubs in question are United, Manchester City, Chelsea, Liverpool, Real Madrid, Barcelona, Bayern Munich, Paris Saint-Germain, Juventus and Inter Milan. All are European heavyweights and pose enticing options to Haaland. The striker is under contract at Dortmund until 2024 but has a reported £66million release clause, which comes into effect next summer.

Then there is the subject of Raiola. The outspoken agent has a fractured relationship with Manchester United, having made many controversial statements in the hope of securing a move away for his client Paul Pogba. That will be a major stumbling block in itself, but Solskjaer has a strong relationship with Haaland having worked together at Norwegian outfit Molde.

Speaking about the player last month, Solskjaer said: 'When you have had kids and players through as a coach, you follow them and I keep in touch with Erling.

'It's great to see him become the player he has become and [how] he works to improve all the time. He's a Dortmund player - we just wish him well there and let's see what life will bring later on.

'You know I can't speak about Erling because he's at Borussia Dortmund, and it's disrespectful to talk too much about it, apart from that I know him and I speak to him. Who wasn't interested in him a year ago? Everybody would say you would take the best players in the world and Erling is a top player.'

Questions over the Tottenham talisman's future have been persisting for a number of seasons now as he is yet to add a piece of silverware to his unquestioned talent in north London.

Tottenham are determined to keep hold of their prized asset but he turns 28 in July and many are seeing it as a 'now or never' moment to seek pastures new this summer.

Spurs chairman Daniel Levy has put a price tag of £150m on Kane, who has yet to win a trophy despite scoring 210 goals in 321 games for the club.

His attacking output would undoubtedly propel United into the conversation for the highest of honours, but the Red Devils are wary of such a high fee as the world tries to recover from the financial implications of the coronavirus pandemic. However, the thought of him linking up with fellow England internationals Rashford and Greenwood would whet the appetite of any Old Trafford supporter.

The England captain still has three years on his deal at Tottenham too, giving Tottenham more than enough leeway to either keep hold of their star striker or drive an inflated price for him.

If Haaland and Kane's names have been routinely linked with a move to Manchester United then times that by 10 for Sancho.

The Borussia Dortmund winger seemed destined for a return to England last summer but the move broke down between the two clubs. United were unable to agree a fee for the 20-year-old with Dortmund asking for £108m.

The right wing has been a position neglected by Old Trafford for years and Sancho would have provided skill, poise, end product and an overall X-factor to United's attacking armoury there.

In 32 Bundesliga games for Dortmund last season he scored an incredible 17 goals alongside 16 assists as they finished second. This output made him Dortmund's top goalscorer and assist-maker in the league. So far this campaign he has six goals and nine assists but last month he became the youngest player in Bundesliga history to record 50 assists. He achieved the feat in just 99 games, to make it the more impressive.

The purchase of the England international could work in two ways for United. First of all it would fulfil the problem position at right wing but it would also result in Greenwood playing as a centre-forward. The 19-year-old is deemed to be the club's best finisher and it would see him play in his preferred position too.

However, the likelihood of signing Sancho has been slightly dimmed due to Dortmund's valuation of the player in a transfer market impacted by Covid-19, much like with Kane. Also coupled with this is the fact that United have bought young two right wingers this season - Facundo Pellistri and Amad Diallo.

From the outside this looks like a no-brainer. While Cavani doesn't have the numbers to show for it, his impact in the United XI has been clear to see.

His arrival as a free agent was derided by some, mainly due to United's incompetence to only complete the deal on the final day of the delayed summer transfer window, but the Uruguayan has usurped Martial as Solskjaer's first-choice No 9.

The 34-year-old's movement and predatory instinct is a class above Martial's and it's telling during matches. Rashford and Greenwood could learn a thing or too as well.

United's No 7 is constantly on his toes and gives opposition defenders a tough time with his non-stop workrate.

The striker has been sidelined since the 1-1 draw at West Brom on February 14, his birthday, and was missed during the Red Devils' stalemate at Chelsea.

Upon moving to Old Trafford, Cavani signed a one-year deal with the option of a further year. According to the Times, he would be owed £1.75m in compensation if United decide against activating this option.

Solskjaer and executive vice-chairman Ed Woodward will have to decide whether to extend Cavani's deal, with the United manager said to be keen on keeping him for the 2021-22 season.

While on the pitch he has popped up with important goals - such as a matchwinning double at Southampton on November 29 - he has also been a leader off the pitch.

Cavani has supported United's younger batch of forwards in training too, including Rashford, Martial and Greenwood.

He has scored seven goals in 24 appearances in all competitions for United, the last of which came against Everton on February 6.

Manchester United's philosophy and DNA is all about giving their academy stars a chance at progression within the first team. Rashford and Greenwood are current prime examples of this. Shola Shoretire is the latest hot prospect to be given a taste having made his first-team debut last month.

And the next one who could follow in their footsteps is Joe Hugill. The highly-rated striker put many outside Old Trafford on notice by scoring four goals as United's Under-23 team won 6-3 at bitter rivals Liverpool on January 30. Just two days later, Solskjaer spoke positively about the 17-year-old hailing him as a 'top striker' and that the club are 'looking forward to seeing his development'.

In terms of style, the teenager has been likened to Kane - which is some compliment. Like Kane, he doesn't boast blistering pace but can score emphatically with either foot and has a wonderful touch. He's demonstrated his prowess in front of goal this season for the U18 and U23 United teams by scoring an impressive 16 goals in just 21 games across both age groups. Out of those 21 appearances, only 14 have been as a starter too.

In addition, from a physical standpoint he has the attributes to cope with the rigours of professional English football. Despite being 17, he stands at 6ft 2in and his frame has been a key reason as to why he has jumped up in age levels to the United U23s this term.

It would be foolish for United to rest so much pressure on Hugill's shoulders though, especially considering that Rashford and Greenwood are just 23 and 19 respectively. However, there is the old adage that if you're old enough, you're good enough. Only time will tell if that is the case though.