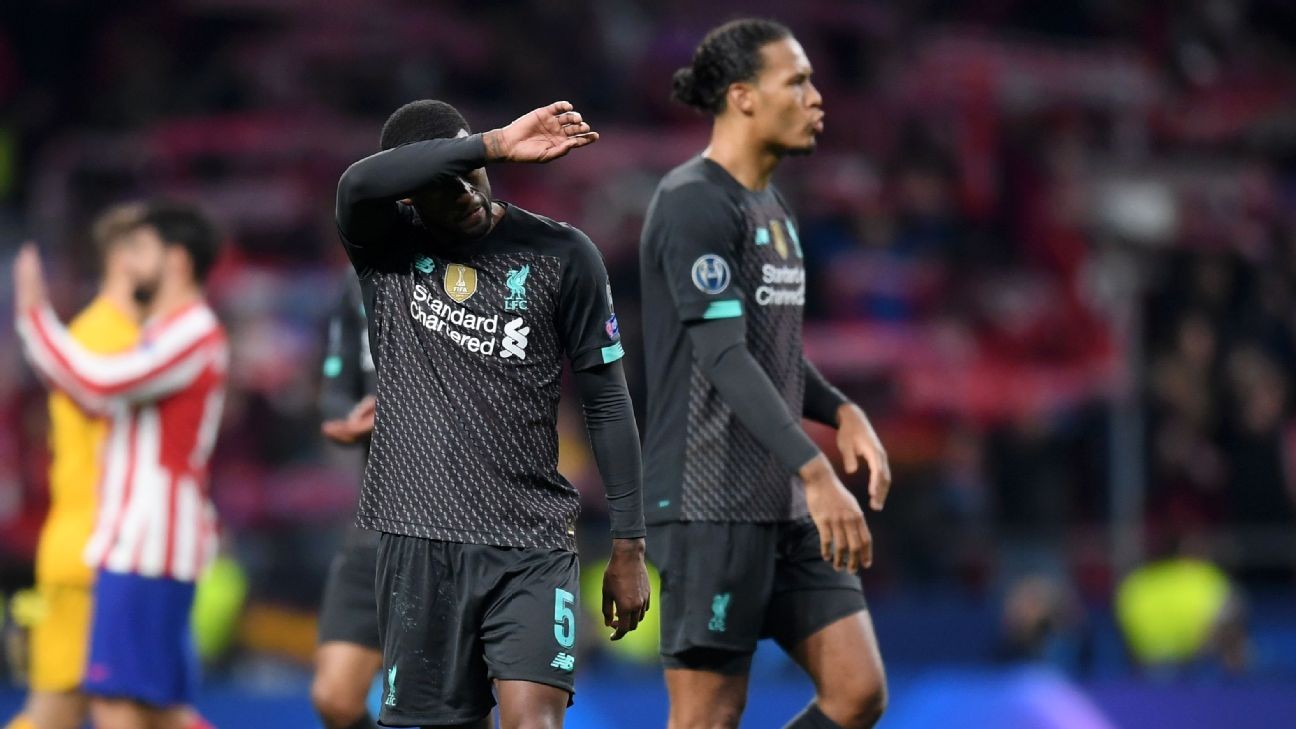 Craig Burley says Liverpool wouldn't be the same team without their captain.

Liverpool must deliver a typically inspired Champions League knockout-stage second-leg performance at Anfield in three weeks' time if they are to advance to the quarterfinals after a 1-0 loss at Atletico Madrid.

Saul Niguez scored the game's only goal with just four minutes on the clock after a wicked deflection off the ill-placed Fabinho from a corner fell to the feet of the Spaniard on the edge of Alisson's six-yard box.

Though Liverpool struggled to create chances, they totally dominated possession -- as teams opposing Atletico Madrid in European competitions often do.

And while Fabinho's unfortunate touch ultimately gifted Atletico their first-leg advantage, he proved to be a genuine workhorse in midfield and won second balls superbly.

Tactically, Liverpool were outsmarted by their opponents and must improve their ability to pass the ball quickly for the second leg at Anfield.

The decision to bring Divock Origi on in place of Sadio Mane at half-time proved uninspired, though the former didn't exactly enjoy his best game either.

5 -- His decision to take Mohammed Salah off but leave the uninspired Georginio Wijnaldum on, perhaps won't go down as his best call among Liverpool supporters.

Liverpool were beaten tactically tonight, proven by their total domination of possession but lack of clear chances. Wings were exposed, and Jurgen Klopp's side couldn't utilise the time they had on either wing.

GK Alisson, 7 -- No fingers can be pointed concerning the goal, as Alisson was simply caught in an unfortunate spot after the ball ricocheted off the foot of teammate Fabinho. Made a couple of eye-catching saves to keep the two-legged tie in the balance.

DF Trent Alexander-Arnold, 6 -- Two poor deliveries from the right in the game's opening stages put him on the back foot, but he recovered well to deliver a number of dangerous crosses. Just lacked support in key moments.

DF Joe Gomez, 7 -- Brilliant and improved vision in the second half, most notably when picking out the dangerous run of Salah, which the Egyptian nodded wide. Certainly, one of Liverpool's brighter sparks when they attempted to advance play beyond the hosts' back four.

DF Virgil van Dijk, 6 -- A dreadful individual error when attempting to head the ball clear almost gifted Atletico a second on the half-hour mark via Alvaro Morata. Had little to do otherwise amid the hosts' attacking lull and appeared frustrated by the forwards' lack of creative runs through the restricted channels.

DF Andy Robertson, 7 -- Was defensively alert to clear danger on the rare occasion when Atletico threatened in the opening half. As per usual, he pushed forward on the left side and played a disciplined game to avoid suspension for the second leg.

MF Georginio Wijnaldum, 5 -- Passing was accurate, but it was often uninspired and safe. His performance generally matched a lacklustre performance by Liverpool's entire midfield -- a key reason behind Atletico's clean sheet.

Jordan Henderson, 6 -- Didn't see much of the ball this evening, perhaps for the best given that Liverpool had to utilise the near-empty wings in order to break into the hosts' final third. Had a chance to equalise, but guided a tricky volley wide.

MF Fabinho, 7 -- Rotten luck in the build-up to Atletico's first goal as his ill-placed foot gifted Saul a goal from in close. Proved himself as a real workhorse in midfield by winning second balls well but the end product was missing, like many of those in grey around him.

FW Mohamed Salah, 6 -- Was allowed very little by a resolute Atletico back four, and the same applies to his forward teammates Roberto Firmino and Mane. Could only watch his shots be blocked when he did pull the trigger on the rare occasion.

FW Roberto Firmino, 6 -- All action, and showed brilliant skill and quickness in the central attacking areas. That said, because of his central role, he became unstuck by Atletico's defending which offered the visitors very little in terms of generating chances.

FW Sadio Mane, 5 -- Struggled to make any impact on the game and consequently failed to register a single shot. Tactically, Mane struggled to deal with Atletico's narrow back four that closed down any quick sight Klopp's side had on goal.

FW Divock Origi, 6 -- Ushered out of play too easily on a couple of occasions and his impact on the game perhaps wasn't what Klopp was looking for on the left.

MF Alex Oxlade Chamberlain, N/R -- On for 20 minutes but didn't make much of an impact.

MF James Milner, N/R -- The versatile veteran came on for Henderson but was unable to help the Reds find an equaliser.