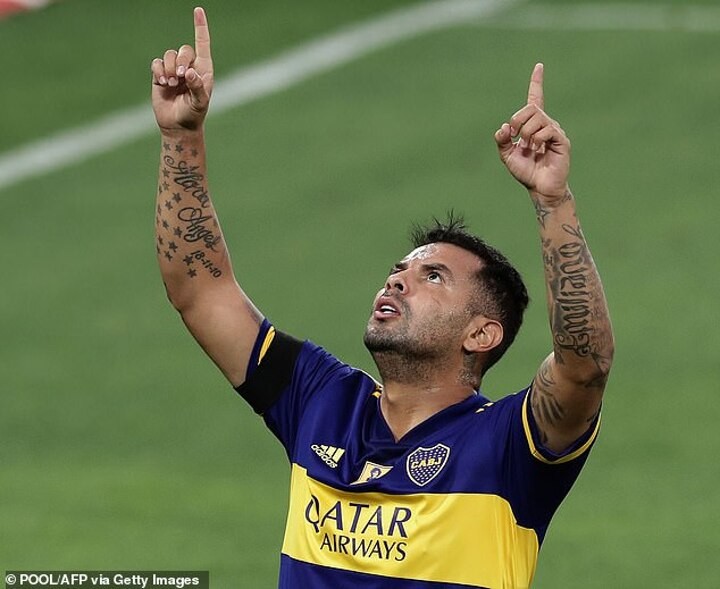 Boca Juniors and Newell's Old Boys paid tribute to the late great Diego Maradona before their game on Sunday.

Argentina legend Maradona, who died on Wednesday at the age of 60, played for both clubs during his storied career - winning a title with Boca in 1981 before he started his European adventure with Barcelona.

Before the two sides faced off in the aptly named Copa Diego Armando Maradona, both sets of players wore special shirts for a minute's applause around a flag of the 1986 World Cup winner.

There were Maradona banners scattered all over the stadium but the most emotional moment of the night came after Edwin Cardona scored his first of two goals on a night Boca won 2-0.

After scoring a free-kick the Boca players went over to Maradona's daughter Dalma, who was sat in the stands and applauded her.

Maradona's daughter was overcome with emotion and was shown crying in her father's box at the Bombonera at the gesture.

Both sets of players had Maradona's name on their shirts while the referee had 'Gracias Diego' written on the back of his shirt.

The Copa Diego Armando Maradona is the new name for the Argentine league cup, which is a replacement for the league this season.

There have been tributes across football over the weekend's fixtures to Maradona who is widely known as one of the greatest players in the sport's history.

Maradona is a legend in Napoli, who played their first league game since his death with a 4-0 win over Roma on Sunday.

As with all other Serie A matches, the game was preceded by a minute's silence for Maradona, who enjoyed seven remarkable seasons at Napoli, and the game stopped in the tenth minute for a round of applause.

Club captain Lorenzo Insigne laid a bouquet of flowers under a photo of Maradona before the match, and he marked his goal during the match by collecting and kissing a shirt with Maradona's name written on it.

Another player who will go down in Argentine football history Lionel Messi also did a touching tribute during Barcelona's game against Osasuna.

After scoring in their 4-0 win on Saturday, Messi celebrated by wearing Maradona's Newell's Old Boys shirt and pointing to the heavens.

Maradona suffered a heart attack at his Buenos Aires home on Wednesday and there were three days of national mourning in Argentina following his death.