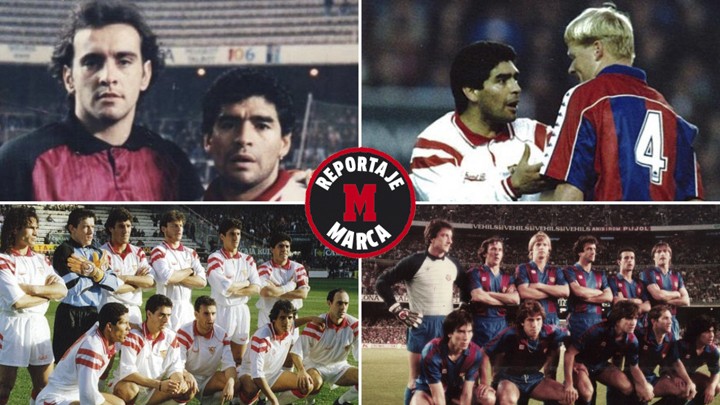 Diego Maradona's career in LaLiga with Barcelona may not be remembered as clearly as his time with Napoli, and that is partly down to how it ended, yet former teammates of the Argentine icon have remembered his impact on Spanish football.

Maradona's death stunned the world on Wednesday afternoon, despite reports of ill-health having emerged in recent weeks.

Initial surgery on a bleed on the brain appeared successful, but it was to be a heart-attack which ultimately took someone who seemed invincible to so many.

Three days of official mourning have been announced in Argentina, and there is a palpable sense that life in Argentina won't ever quite be the same, even though most of the population were never physically touched by the footballer.

Yet, it was his spiritual touch which brought a South American nation to its feet in footballing terms, becoming the most famous and beloved export ever to emerge out of Argentina.

His career in Spain was two-fold, with the first stage coming in the summer of 1982 when Barcelona paid 1,200 million pesetas for the promising playmaker.

By the time he returned to Spain in 1992 with Sevilla, who paid 750 million pesetas, Maradona was one of the most revered footballers the planet had ever known.

Despite playing in Spain at the beginning and end of his career, Maradona left a similar impact on his teammates, as they have recently discussed:

"He is the best thing that ever happened to me in football," Alonso declared.

"It was the best time in my career for sure, the first day he arrived in the dressing room he took some socks, rolled them up and began to do keepy-ups with them, over one thousand.

"We thought that if he could do that with socks, what could he do with the ball?"

"Barcelona and Maradona missed the chance to define an era," Munoz added.

"If they had been together nine or ten years, it would have been brilliant. The 80s were marked by Maradona, but not with Barcelona due to injuries and hepatitis, he wasn't able to show all that he was."

"I sometimes have a chat with teammates from that time and we talk about Maradona, how good a guy he was and how easy it was to get close to him," Monchi explained.

"There are people who stay with an unkind image of a player who was an idol, but in the dressing room, the dinners and meetings he was another person.

"The way he struck the ball, that technical quality that allowed him to disguise his shot as late as possible made it difficult for us goalkeepers to guess where he was aiming the ball."

"One of the things that most attracted attention was that he always trained with his laces unfastened," Martagon confirmed.

"They were super long at the time, when we had training matches I would step on his laces so he couldn't run, but he never stepped on his own laces.

"I also remember the first day he arrived, he took a little plastic bottle, stepped on the cap and backheeled it into the rubbish bin, we were all speechless."

"Having an idol for a teammate is almost like a title for the group of players that are sharing a dressing room with him," he intimated.

"When I gave him the armband it was a source of pride, not one of humiliation. Nobody told me to do it, it just felt natural that he had to be Sevilla's number 10, Sevilla's captain."