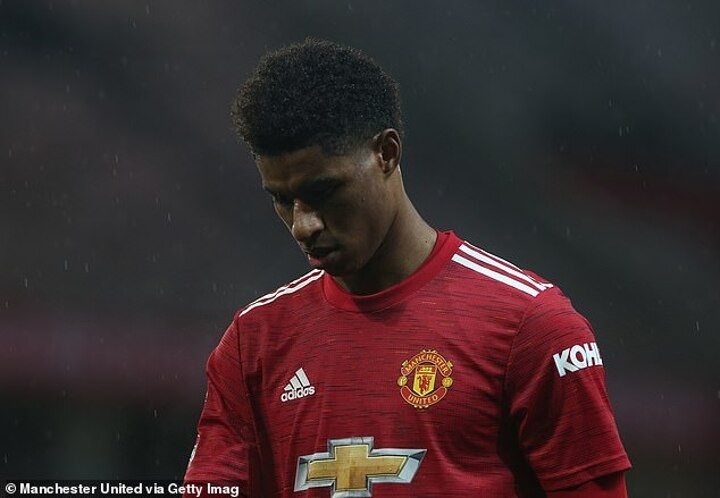 Marcus Rashford is set to be omitted from the BBC Sports Personality of the Year shortlist despite being the bookies' odds-on favourite to win the award.

The Manchester United forward has been tipped to claim the prize in December following his high-profile and popular free school meals campaign.

But Sportsmail understands Rashford, 22, is likely to miss out based on long-standing criteria for the award which state that the shortlist must reflect 'sporting achievements'.

A judging panel will meet next month to decide the shortlist and, while the criteria for 2020 has not yet been confirmed and the panel have the right to make alterations, it has been set in stone for several years.

It is not anticipated to change unless there is a reaction to public pressure.

BBC bosses are aware of the potential for a backlash if Rashford is not included and would look to honour him in some way during the show on December 20 — which is being held in Salford without the usual large audience because of Covid-19 restrictions.

Rashford would be in the running for the Helen Rollason Award, given for 'outstanding achievement in the face of adversity', or a new prize could be created to recognise his bid to end child hunger.

The shortlist is usually announced at the end of November although in 2018 it was only revealed on the night of the programme — an option which the BBC may choose to repeat this year in an attempt to avoid a long-running debate about Rashford.

Public support for Rashford has seen him leap above Formula One record-breaker Lewis Hamilton as the bookies' favourite for the trophy but that is causing the BBC a major headache.

The current SPOTY conditions state: 'The panel will select a shortlist using the following criteria: reflects UK sporting achievements on the national and/or international stage; represents the breadth and depth of UK sports; and takes into account 'impact' of the person's sporting achievement beyond the sport in question.'

The SPOTY shortlist is decided by a panel of usually 12 people, which includes representatives from the BBC and the sports industry and is chaired by Barbara Slater, director of BBC Sport.

The panel is given a list of the top sports people of the year compiled by the SPOTY production team, although they can consider other candidates.

The panel then produce a shortlist based on a 'consensus view'.

If a consensus cannot be reached, a vote takes place. The criteria has not changed since 2012 — the year after the BBC faced criticism for having no women on a 10-person shortlist.

However, Match of the Day commentator Guy Mowbray was castigated on Twitter last weekend after he introduced coverage of United's game with Chelsea by saying: 'Whether you agree with Marcus Rashford's causes or not, there's surely only admiration for his continued commitment to them.'

Mowbray explained that 'impartiality broadcast rules mean things have to be phrased a certain way' before deleting his social media account.

West Ham co-owner David Sullivan has joined Rashford's push for free school meals during holidays by donating £25,000, while Manchester United will provide 5,000 meals for vulnerable children over the October half-term holiday in partnership with the charity FareShare.