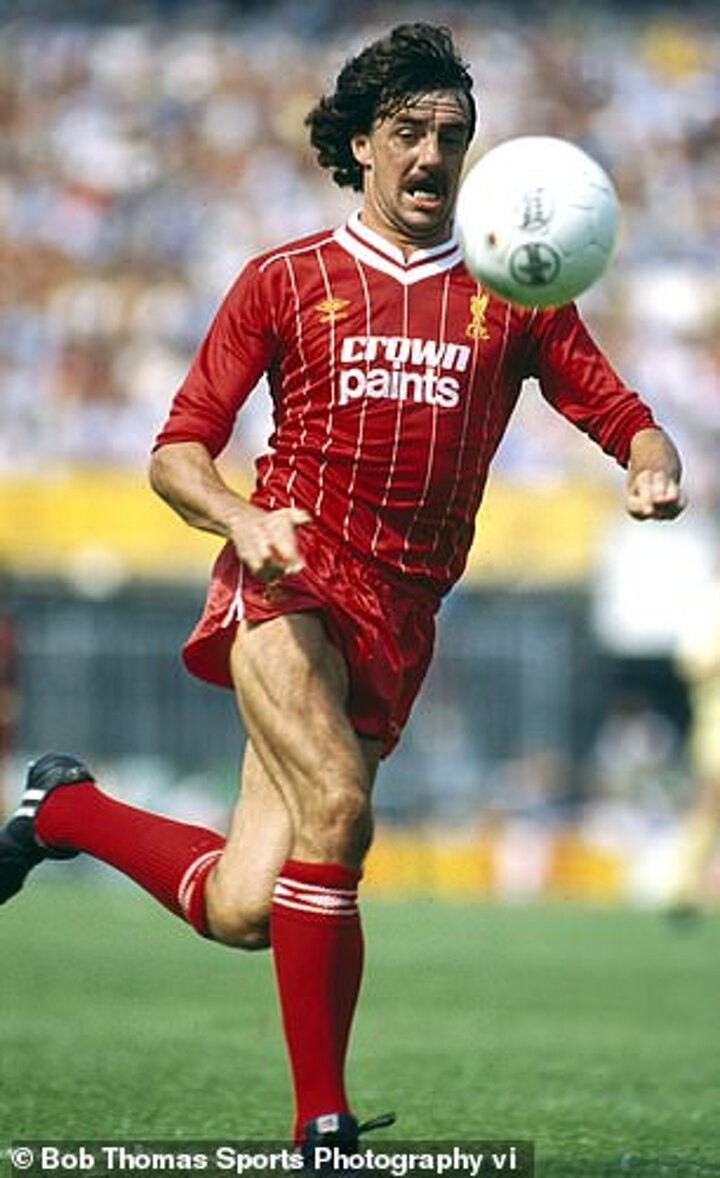 This is an interview that starts with a quiz question. Mark Lawrenson played for Liverpool for seven seasons in the 1980s.

He won five league titles, three League Cups, an FA Cup and a European Cup. But during those years of eminence, how many times did Liverpool beat Manchester United?

'I know it was not many,' Lawrenson says down the phone from his home in Southport. 'There was a League Cup final and then one we won with a Craig Johnston goal in a minging game at Old Trafford. I would say that's it. Two.'

The answer is actually three. Three wins out of 19 games. Liverpool, the best team in the country, actually went more than six years – April 1982 to September 1988 – without beating their great rivals at Anfield.

'They had Robbo [Bryan Robson] and Remi Moses and Norman [Whiteside] and used to kick the sh*t out of us,' laughs Lawrenson. 'We had Charlie [Graeme Souness] of course and sometimes I got chucked in to midfield to help. It was physical.

'After 70 minutes the referee would finally say: 'Right let's put the ball on and have a match'. But they had really good players, too. Good players who would also try and kick the sh*t out of us….'

Lawrenson is only half joking but the point remains Liverpool versus United has always been a strange rivalry. Few are harder to predict, which brings us to tomorrow and a game, strangely, that champions Liverpool can ill-afford to lose. When Lawrenson looks at Ole Gunnar Solskjaer's league leaders what does he see?

'Lots of match winners and Bruno Fernandes,' he says. 'I haven't seen a lot of players have an affect like him. Masterstroke. If you are up front for United it must be brilliant. He passes it forwards. Not many midfielders do.

'United are still vulnerable and I don't think Solskjaer knows his best team yet. But they do have good players.

'When we didn't beat United it stung but we did console ourselves by winning everything else. We had European Cups and things. We were the biggest two games of their season.'

Lawrenson could have signed for Manchester United from Brighton in 1981. Arsenal were interested too.

'Arsenal offered me less money than I was on at Brighton but said they had the bust of Herbert Chapman and underfloor heating in the dressing room,' he recalls. 'Big Ron [Atkinson] at United was trying to sign Frank Stapleton first. I was really close to going there. But while I waited I met Bob Paisley and [chief executive] Peter Robinson at Liverpool and it was done in ten minutes. The rest of the country were asking: 'Mark Who?'.'

The last bit isn't strictly true. Liverpool had already tried to sign Lawrenson for £70,000 when he was a youngster at Preston. They eventually paid £900,000 for one of the country's most sought-after defenders. It was a club record and the then third biggest fee in the English game.

Lawrenson was a superb footballer. A rangy, aggressive defender who could play almost anywhere. At Liverpool he played in eight different positions.

'I didn't mind as it meant I was in the team,' he says. 'When I got there I had to show them I could play. But it wasn't hard. We always had the ball for a start.

'The best two players – Kenny [Dalglish] and Charlie – had both come for big money so they knew how it felt. Straight away Kenny said: 'Come and live in Southport near us'. The car for training every day was me, Ken, Al [Alan Hansen] and Ronnie [Whelan]. We did that for years until Kenny became boss and sacked us off. That was a shock. Not…'

Lawrenson's central defensive partnership with the imperious Hansen was among the best European football has ever seen. Souness said Hansen would end a game without a mark on him whilst Lawrenson would, well, not. 'Yeah, that's totally how it was,' Lawrenson concurs. 'I would be covered after ten minutes. But football was just so easy for Alan, too easy really.'

Liverpool won the league in Lawrenson's first season. And the next two. Five times in seven remarkable years. So what does it feel like to be invincible?

'I have no idea because we never did feel that, never,' he says. 'We always knew how bad we could be on our day.

'This Liverpool team knows that now. They have lost 7-2 at Villa. We had a 4-0 at Coventry when Terry Gibson scored a hat-trick and me and Al were awful.

'And you know what the boot room was like. You would win 5-0 and they would tell you the other team had been rubbish. That was Ronnie Moran. He was only happy when he was unhappy.

'And the senior players bought in to that. Kenny was a miserable sod in training. Play a pass not to the inch he wanted it and he was on you. 'What the f*** was that?'.

'Charlie was the same. People say now: 'Who is Charlie?' It's Souey. Champagne Charlie. But what a player. Kenny was a genius. He couldn't run, he couldn't head it and he had a fat arse. But he was still a genius.

'Then he would come off and give all the praise to someone else. If you did an article and came across as Billy Big Bollocks the senior players would be on you.

'And Kenny was hard. What an example. Never wore shin pads. He said to me once: 'The day I can't see a tackle coming is the day I pack it in'.'

Lawrenson has a fantastically thick skin and an enviable capacity for self-mockery. He says he developed it in the Liverpool dressing room. 'When we lost it was a national debate,' he says.

There was a time when rumours circulated Merseyside that he may he gay. He still laughs about it.

'It started when I got highlights in my hair,' he explains. Then Peter Robinson said the police had been on. They said I had been seen with some guy on Otterspool Promenade. I was like: 'No, that wasn't me'.

'But it became one of those rumours and eventually me and my wife did a piece in the Liverpool Echo. It still comes up now occasionally. A Man United fan may call me a 'gay boy' or something but only if he's a tosser. Hey ho.

'Maybe my voice didn't help. And my running style. And my hair...But that's just life isn't it?'

When the call was made to ask if he fancied a chat about his distinguished career, Lawrenson's reply was instant. 'Did you say distinguished or extinguished?'

It's true we don't see Lawrenson on TV as often as we did. Once he was in the vanguard of modern punditry, his partnership with Hansen moving from the field to the Match of the Day studio. Now he is more likely to be heard on BBC 5 Live.

'The TV landscape was changing and I saw it coming when Al stepped away,' he says. 'You can think you've done a good job but it's life. It changes. I don't mind who does it now as long as they are the best person for the job.

'When you listen, are they telling you something you don't know? Anyone can state the bloody obvious. Honesty is important otherwise there's no point. I upset Evo [Roy Evans] one day. And Reidy [Peter Reid] and Big Sam [Allardyce]. They all pulled me. But it was just my opinion.

'Graeme is the best pundit and Gary [Neville] and Jamie [Carragher] are really good. But technology was coming and the BBC were behind the curve. When Gary and Jamie did the Sky Monday thing they got the kit installed in the house. Can you imagine the BBC doing that?'

Lawrenson remains a BBC man at heart. He is a devotee, for example, of Mark Kemode's film reviews on Radio5. 'He has 90 seconds to cover a two-hour film and he is brilliant it, an absolute authority' he says.

As for the current vogue for phone-ins, he is less enthusiastic. 'They are like Twitter for radio, no thanks.'

Lawrenson has experienced disappointments before on a much greater scale. An Achilles injury ended his career at 29 while managerial spells at Oxford and Peterborough didn't last long. In the wider context, none of it really matters anyway. His dreams came true the moment he made his debut for his home town club at 17. His father had played for Preston while his step dad was on the board.

Lawrenson could have been a cricketer – Lancashire offered him terms – while his mother wanted him to be a priest. In the end Nobby Stiles and Sir Bobby Charlton changed all that.

'All I ever wanted was to play for Preston,' he says. 'Bobby was manager and rang my headmaster and asked for me to be released to sign. My mum passed away 15 months ago but her and Lady Norma [Charlton] were still sending Christmas cards. I played for Jack with Ireland as well, of course. The only player to play for both.

'But Nobby was the one. He was youth team manager and had the biggest input in my career. We were 4-0 down at Villa in the Central League. I was left wing. He was still in the team and put me in the centre of defence for the second half. That was me, up and running.'

Football lost Stiles and Jack Charlton to dementia before Christmas. Sir Bobby has also been diagnosed. Lawrenson ponders the sadness of that. Like many others, football still provides him with security and balance. In Southport and along the coast at Formby, he is one of ten former players from his time and they still mix.

'None of our lads lived over in the posh parts of Cheshire and Manchester like some Liverpool players do now,' he says. 'That would have been unthinkable.'

Back to the rivalry and Lawrenson still views Liverpool as a cut above and doesn't see it changing as long as their front three stay fit and firing. He wonders if Mo Salah has had his head turned, though.

'I wouldn't be surprised if he knocked on Jurgen Klopp's door before long,' he says.

Said without malice, it's just an opinion. There was never anything that was nasty about Lawrenson, either on the field or off, though Souness once ventured he would occasionally arrive late in to a tackle on purpose – just to make a point. 'Yeah, yeah..maybe,' Lawrenson concurs.

'Mind you, I still got there a damn sight earlier than he ever did…'