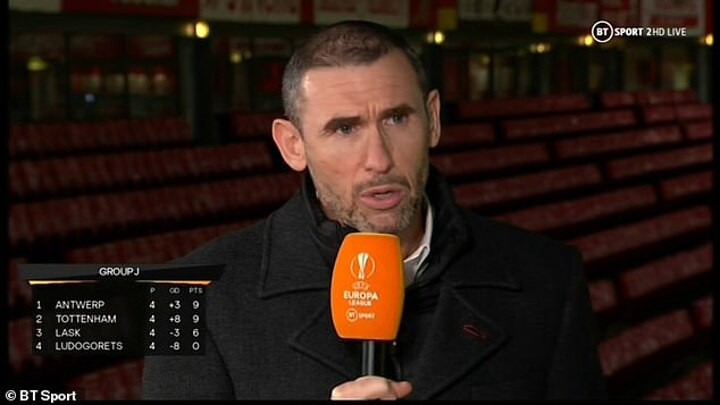 Martin Keown has urged Arsenal to take the 'expression and enjoyment' with which they played against Rapid Vienna into the weekend's north London derby.

The Gunners confirmed themselves as winners of Group B after an excellent 4-1 victory against the Austrian outfit in front of 2,000 returning fans, and consequently took their tally in the competition for goals scored up to 16.

Mikel Arteta's men however have struggled to recreate that goalscoring form in the Premier League, netting just 10 goals in the top flight this term, a total superior only to those of the bottom three clubs.

But speaking after the Gunners' win, former defender Keown insisted they must look to maintain the fluency with which they played tonight if they are to be successful at the Tottenham Hotspur Stadium.

'If I had anything to say about the Wolves defeat [last weekend], it looked like the players had stopped enjoying their football,' Keown said.

'Arteta has worked under two great managers, [Pep] Guardiola and Arsene Wenger, and Wenger was all about expression, freedom, being creative and enjoyment.

The Gunners have not beaten Spurs away from home in the Premier League since 2014 and now visit a Jose Mourinho-led side that sits top of the pile currently.

But Keown believes a lot will be discovered about the team's character at the weekend in the face of a rather daunting prospect.

'Arteta knows when you come to manage a club of this enormity that when it comes round to the Tottenham game, you have got to win that game and get something from it,' he continued.

'I think that is what we are going to see, what the team are made of and what the manager is made of. He is in a difficult situation, we know Spurs are the big favourites going into this having lost only one game.

'Mourinho has really got his team nice and settled and playing for results, and Arsenal need to get one at the weekend and build from there. It is all about the manager making the decision now and he needs to select an XI he can trust.'

The match represents Spurs' second London derby in as many weeks following their goalless draw at Chelsea last weekend.

Keown is expecting Mourinho's men to show similar resilience on home soil on Sunday but believes Arsenal must play four at the back as opposed to five if they are to succeed where Frank Lampard's men failed.

'The challenge will be is that they will have possession, but how do you unlock the door [against Spurs], Chelsea couldn't find it, Spurs were extremely resilient but how can you find a way through?,' Keown added.

'The system he played tonight has a better chance of doing that rather than the five where they cannot get the numbers of the final third.

'That has been the problem, they have not had enough shots and crosses, but tonight the statistics changed, they had lots of shots tonight, the platform was better to work from, we would have seen a better Arsenal had it been in place earlier.'