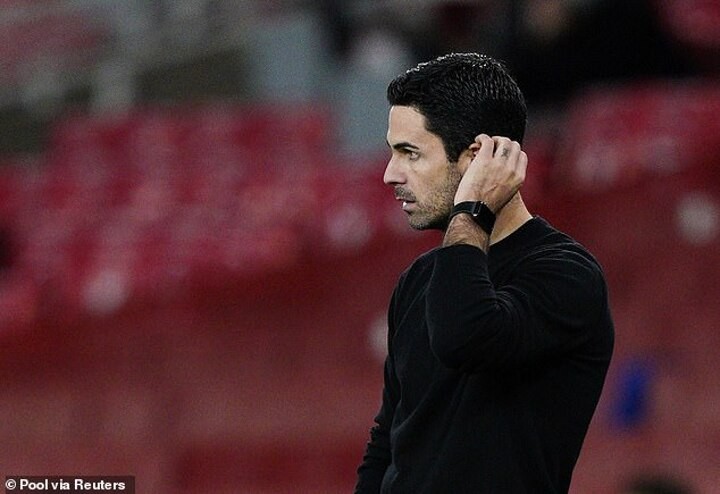 Mikel Arteta is making the same mistakes as his predecessor at the Emirates, Unai Emery, according to Martin Keown.

The ex-Gunners defender was left unimpressed after the north London club lost 1-0 at home to Leicester City on Sunday.

Arsenal are now 10th in the Premier League after Jamie Vardy's winner condemned them to their third defeat of the season, on a night they struggled to create anything of note in the final third.

Since Arteta took the reins at the Emirates in December of last year he has made vast changes to the side he inherited, however Keown, who made 332 appearances for the club, believes Artta has tinkered too much with his team of late.

Emery, who was appointed Arsenal manager in 2018 was sacked after 18 months, often had the same criticism of making too many changes levelled at him and Keown is urging Arteta to learn from those mistakes, rather than repeat them.

'They keep changing from one system to another and they did this with Emery,' Keown told Stadium Astro.

'If you keep changing it, you don't find a rhythm, and that's something that I found in a very successful team.

'It was like putting an old pair of slippers on for a game. Everything was there. You'd fire it into midfield to Patrick Vieira, into Dennis Bergkamp, (Thierry) Henry into the channel; it was three passes.

'These players now are getting the ball now and it's jamming a little bit, so I think keep it simple and start building from this team. If this is the way he wants to play, keep with it, and try to put the people in it and get the messages right and work on it.

'It was very static, the front three never really moved from positions, they didn't make themselves available.'

Arteta has had a great start to his Arsenal managerial career, winning the FA Cup last season and securing the Community Shield in August and Keown believes he is the right man to continue to take the club forward providing he can bounce back quickly from set-backs.

'This is a brand new project for the manager. We don't want to be over-critical,' he added. 'I believe he's the right man for the job 100 per cent, super-bright manager and he's going to have set-backs, it's how he responds to this now.'